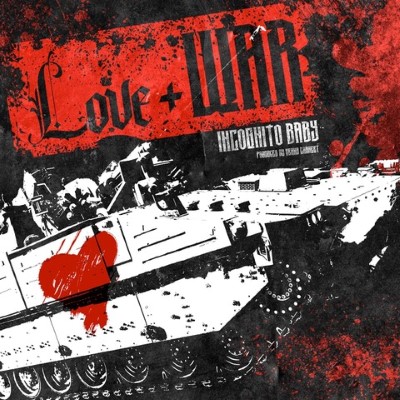 London, ON-based LGBT + hip-hopper, Strange Breed has launched a new experimental alt-rock project, Incognito Baby, with the release of “Love + War”. The single, which was produced by Kenny Carkeet, of Fitness and AWOLNATION fame, is packed with that explosive energy you’ve been longing for.

Best experienced with bass-heavy headphones or subwoofers, your ears are in for a barrage of sound as Carkeet’s trademark bombastic keyboards lay the foundation for the track. Strange Breed (née David Sission), known for his rapid, punchy rhyme schemes, fires off his verses with precision and tongue-in-cheek entendre. The chorus features singing by Strange Breed and guitarist MJ Vaessen, which intertwine marvelously with the splendour of Karla Scadutto’s angelic harmonies.

The song’s theme of love and war is sonically brought full circle with the cleverly written lyrics, vocal melodies, and the methodic, pounding arrangements. When combined, these elements create an atmosphere of entrenching sound that’ll have you play the track back again and again!

“The concept of the song revolves around a relationship that remains strong despite all of its misgivings,” Strange Breed explains.

“Depending on the listener’s point of view, it can be seen as a venting song for a frustration in a current relationship, or the acknowledgment of a very toxic romance,” he further elaborates.

The essence of the single is meant to capture a fun fight song of sorts, lyrically focusing on predicaments couples typically find themselves facing.

Check out the single below, and find out more about the artist via our Five Questions With segment.

My name is David Sisson, but I musically go by Strange Breed. I’m a singer, MC, and poet from London, Ontario. I’m also the co-founder of a new alternative rock project, Incognito Baby.

I tend to bring as much of my life experiences and the world around me as I can into my music. Being in a polyamorous relationship brings unique perspectives to romance and the LGBT life-style, as well as having a partner across a border which has lead to much travel. Seeing so many places, experiencing so many things, and feeling so many strong emotions has provided constant inspiration. I try to capture memories and feelings as raw as I can to really put the lis-tener into that space with me.

It’s certainly been a bumpy road, but there is a strange beauty in that. At first, I completed a 5 track EP called, ’Isolation Blues’. It detailed how the pandemic affected me personally before moving on to release my full-length album ‘The Cat.’ Any setbacks the pandemic caused also seemed to give me extra time to really perfect what I was doing. I took a very different look at things, and feel I’ve grown because of it.

It would definitely be ‘Love + War’ by Incognito Baby. It captures every bit of energy and passion I’ve had for music, combining both alternative rock, electronic, and hip hop elements together. My music can have all sorts of sounds, and this mixes quite a few of them in one.

Not to mention, I got to work with Kenny Carkeet of Fitness and AWONLNATION fame, which was a huge honour for me.

There are tons, but I’ll try and narrow this list to a top five. The Tea Party was the first concert I ever attended as a child and still remains one of my biggest musical influences to date. Death From Above 1979 and USS are also very important bands for me. I grew up in the indie, alt-rock scene, so these two have played a very pivotal role for me in Canadian music. Lately I’ve been listening to a ton of work by The Weeknd. I’m very proud to see how far he’s gotten in the music scene, being a fellow Ontarian. Last but not least, I would also have to say fellow hip hop artist, ScrmmbledEggs. We’ve worked together quite a bit and he’s always been a strong influence on my music.