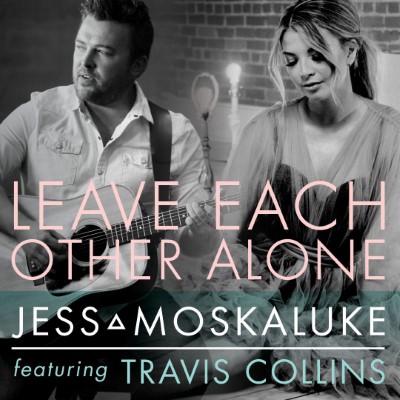 Jess Moskaluke is a platinum-selling, multi-award-winning country star. Travis Collins is an Australian country music singer-songwriter (who has won six Golden Guitar Awards – Guitar Male Artist of the Year, four CMC Australian awards, and is CMA Global Artist Award winner). Together, they have created magic in their stunning new duet “Leave Each Other Alone” released to country music radio and all digital platforms on May 7 via MDM Recordings Inc. / Universal Music Canada. This single, written by Zach Abend, Trannie Anderson, and Jess Moskaluke, is Moskaluke’s latest release from her critically acclaimed album The Demos that dropped in February.

Says Moskaluke about “Leave Each Other Alone,”

““Leave Each Other Alone” was originally written as a solo track, but the thought always lingered in my mind that it could be really magical as a duet. Usually, when I have these thoughts, I immediately have an artist in mind, but this time was different. I had no idea who would or could deliver this song with the passion it deserved. It wasn’t until I was introduced to Travis Collins during a promotional trip to Australia, where I heard his incredible voice and in that moment, knew without a doubt who the song had to feature. I’m so thankful Travis loved this song as much as I do – he really took it to the next level!”

Collins also spoke about this.

“I met Jess Moskaluke at C2C Festival in Australia in 2019, doing a songwriter’s show together. We hit it off like old friends and I became an instant fan of her voice and songs. Fast forward a year and she sent “Leave Each Other Alone” to me, asking if I’d be interested in singing with her on it. I loved this song before the first chorus even hit my ears, and knew it was something I wanted to be part of.”

The extraordinary blend of their voices on this tune is like pairing together a smooth wine with a buttery cheese. It’s also upbeat and fun to listen to. “Leave Each Other Alone” is an outstanding song that will get into your head and you’ll never want it to leave.