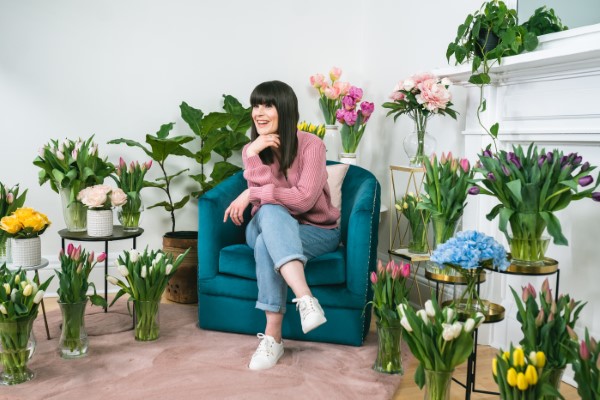 Award-winning Canadian singer-songwriter, Rachel Beck, debuts her first release of 2021. The new offering, “Dizzy”, captivates from the first note as Beck’s dreamy vocals dance among swirling strings and piano. Accompanying the single is the official video, depicting a playful twist on the daisy oracle (the well-known “he loves me, he loves me not” children’s petal-plucking game).

“Dizzy” is produced by Hill Kourkoutis, an accomplished contributor in the Toronto music scene. Rachel shares:

‘“When the opportunity arose to work with Hill, I couldn’t pass it up – but she lives in Ontario and I live in PEI. With all the travel restrictions, we had to get creative. A home recording session (with engineering tutorials for me!), a remote studio string day, and a dozen Zoom calls later, here we are.”

Producing the track remotely took patience and communication, two things so often missing in relationships. Dizzy is about being tired of waiting and tired of playing games. The chorus echoes, “you got me dizzy, dancin’ circles round the truth…”

The official video for Dizzy was co-directed by Beck and long-time friend and collaborator, Savannah Belsher-MacLean. Rachel laughs:

“The video was created in the true DIY spirit: I bought a couple hundred tulips from a local farm, rounded up a crew of three ridiculously talented pals, and we shot the whole thing at my friend’s house,…By the end of the end of a very long day, we had tulip guts everywhere and lots of behind the scenes laughs over #flowerfails, but we got the shots.”

Beck’s sophomore record, Stronger Than You Know, is an echoing cry-out from a forest, a chilling dance upon a grave, an arrow shooting straight to the heart. It is a call to strength. Intimate and close, the six-track EP, produced by Daniel Ledwell, is sonically decorated amidst compelling electronic rhythms and dreamy synth layers. Beck’s vocals float across the vivid, harmony-laden, ethereal soundscape for which she has become known.

Stronger Than You Know is celebrated as Music PEI’s 2021 Album of the Year and is nominated for three ECMAs, including Album of the Year. It follows Beck’s self-titled debut, which garnered multiple awards, including a SOCAN #1 Award for single Reckless Heart. In addition to hitting #1 on the CBC Music Top 20 Chart, Reckless Heart was named one of the Top 100 Canadian Songs of 2018 and ranked #4 on the All Canadian Fan Favourites of 2018 by CBC Music.