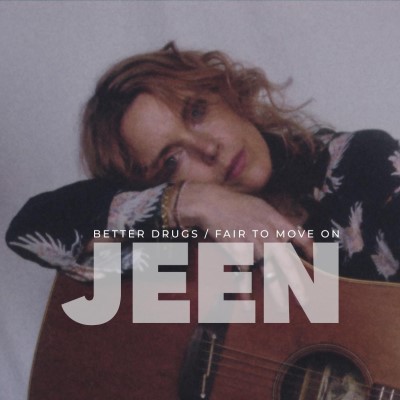 Canadian indie alt-pop songstress JEEN releases a double single today, “Better Drugs/Fair to Move On” from her forthcoming new album, Dog Bite. “Better Drugs” wonders why we are always searching for something more while “Fair to Move On” looks at a mutual drifting apart and a slightly regretted goodbye. Co-produced by JEEN and renowned musician/fellow bandmate Ian Blurton (Change of Heart, C’mon, Future Now), Dog Bite will be released on all digital streaming services and physical formats October 2021.

“I wrote ‘Better Drugs’ eight months after watching the world burn, with everything so exposed and gross. Like we had all lost too many pieces of ourselves to put back together or something…I wondered how fundamental it was, like how broken are we, you know? On top of that, I had a very sudden death in the family 48 hours before we went into the studio to record. This kind of raw disconnect leads to all the problems especially if you’ve lost connection with yourself…so with all that fell away last year, I found myself pathetically grateful for the few people I still had around me.”

What started as an EP quickly grew to a full-length LP, coming in at 11 songs. Recorded while demoing at home and jumping into Pro Gold Studio in the brief moments between lockdowns, it’s hard to not read the impact of COVID-19 into every line.

Dog Bite goes beyond a pandemic record, bursting at the seams with the desire for more, peeling back the layers of isolation, and exposing a yearning for connection, for love, and all the parts of our lives we’ve had to put away. Evoking the spirit of everything from the best fuzzy guitar riffs in The Breeders catalogue to the indie-rock pop of The New Pornographers and all the stops in between, JEEN puts it all on display.

The lead single “Don’t Wait” is also available now, a sonic road trip featuring vocals from Blurton, a winding road of breezy guitars, and boisterous choruses. This record is every bit as much about the desire to see where we’re going as it is worrying about where we are. The music landscape might be changed forever, and Dog Bite dares to ask what we are coming back to.

In October 2020, JEEN released a self-titled album, produced with Blurton and featuring him on lead guitar, along with Stephan Szczesniak on drums, Brendan Canning (Broken Social Scene, Cookie Duster) & Ben O’Brien on bass, Jeff Heisholt on synths, and Kevin Fox on cello. JEEN says of the record:

“I’m used to making records pretty much by myself, recording more lo-fi releases in my attic. I was so happy to have full production after doing it on my own for so long. I’m not much in the way of more traditional singer-songwriter approaches, I always end up drifting…it’s art after all, and this is just how I like to make it.”