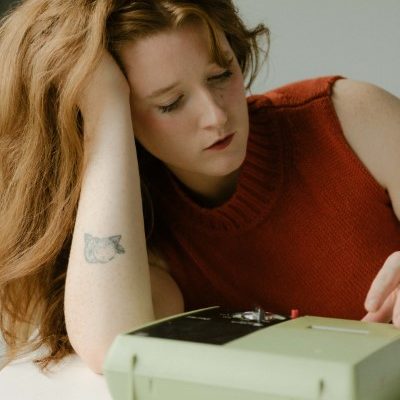 You may recognize Kenzie Cates from her 2019 debut single, “Black Magic”, but now’s the time to really get to know her from the inside out. Her newest release, “Just Ain’t You”, not only shows growth as a songwriter but also allowed Kenzie to get even deeper into the creative process and launch her into an artist who, in her own words, “just heckin’ gets it.”

Every word of “Just Ain’t You” makes the listener go, “Yes! She gets it!”, so thank you for that! Who are some artists/songwriters that you grew up listening to that gave you this same feeling? What about now?

Wow, I LOVE to hear that. I’m so glad you had that experience listening to the song. That’s definitely the goal, so thank you! As a kid, Avril Lavigne and Hillary Duff, P!NK, etc., really gave me that feeling of being understood (although what kind of complexity instilled in me a need to feel “understood” as an 8-year-old girl, I could not say). When I was in high school, Taylor Swift was my girl. Right now I love LÉON, JP Saxe, Ashe, Tayla Parx, Julia Michaels, and James Bay. I love when you find an artist who just heckin gets it. It feels so good.

Was the new single created entirely in isolation during the pandemic?! What was the biggest challenge in that process?

I actually started writing the song in March 2019 and demoed it in November 2019 with Ryan Stewart. I met my producer, Will McBeath, in April 2020 (right after they officially declared the pandemic). Will is Nashville-based and once I realized I wasn’t going to be back in town anytime soon, we decided to just make the thing remotely. He did most of the track in one go, and once he sent me the instrumentals, I asked my good friend Kate Kurdyak and her sister Lauren Kurdyak (of Vox Rea) if they could help. They invited me out to their amazing cabin in Sooke.

They set up a little vocal booth and we got to track all the vocals for the song, including the backups (courtesy of Vox Rea), while overlooking the ocean. It was honestly such a special weekend. I feel so happy when I listen to the song and hear their voices in it now — they’re quite pronounced in the post-chorus “ahs”.

It was mostly smooth sailing except finding the right cable for this dumb interface we got. Aside from that, the biggest challenge must have been trying to choose 80 or so takes out of over 600 (or something crazy like that) to send to Will. I didn’t trust myself to know which ones were the best, so it was a challenging and valuable exercise.

While your recent three-song limited-edition EP (Relax in Red) didn’t include the single, do you have plans to include it on a full album?

The EP was three other songs that I loved but couldn’t see myself releasing anytime soon because I was already planning the release of “Just Ain’t You” at that point and they were so different (one was a country song!). I just put the EP out to give myself something to do, and the people who like my music something interesting (I hoped) to engage with while I got all my ducks in a row. I have a bunch of other songs I plan to release as singles next. Eventually, I’ll probably want to make an album, but I want to do a LOT more writing and first. When that time comes though, I definitely wouldn’t be against throwing “Just Ain’t You” on there if she fits.

Your previous single, “Black Magic”, saw some great success on the CBC, as a finalist in the Indie Spotlight contest at Canadian Music Week (2019), and across Spotify! How would you say you’ve changed/grown as an artist since then?

I think I’ve started trusting myself more. That means being a little more opinionated when it comes to things like production and branding; I’m not willing to make compromises the way I did with “Black Magic,” where I felt like everybody I was working with knew better than me, so I was constantly deferring to them or straight up asking them to make big decisions for me.

Their ideas were good, that wasn’t the issue. I just didn’t trust myself and thus ended up putting out a song that didn’t feel like me and that I couldn’t stand behind. I am starting to think artists need to learn how to self-direct. While I still might not know exactly who I am as an artist, I do know myself at least in terms of what I like and what I don’t like, and I have committed to trusting that instinct above all else.

Plan 1: get vaxxed. Plan 2: I just entered CBC’s searchlight contest (vote for me, please!!!) Plan 3: I and my good pal and fellow musician, Michaela Slinger, have been discussing the possibility of spending a few months in LA in the fall or winter to do some writing and networking, pandemic permitting. Finally, I am planning on seeing my fam and friends as much as humanly possible.