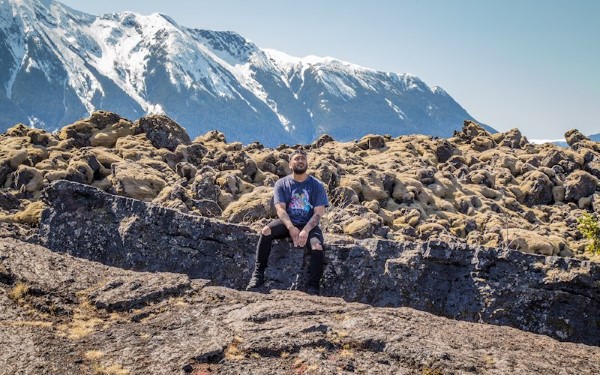 British Columba-based independent artist, Xray-Ash has unveiled the new single, “Venlafaxine” from his upcoming album, 2004, which is set to drop in early summer. The track’s beat features a laidback and bright guitar line under droney minor chords and a simple drumbeat, all created by producer Kobe Beats. Xray-Ash’s lyrics are right at the forefront and sung in an almost spoken-word poetic verse.

Named after Ashneel Rai’s (aka Xray-Ash) anti-depressant prescription, “Venlafaxine” is a  completely transparent lo-fi hip hop track that isn’t afraid to talk about the trauma and sometimes overshadowed feelings of depression.

There has been an increase in anti-depressant use in North America in the last few years, so Xray-Ash’s single could not come at a better time. It’s a track meant to convey that we are not alone—mental health can affect us all.

And Xray-Ash’s one-liners like “the last time I open up will be my autopsy / I take so much to not feel like me,” will stop you dead in your tracks.

“The song is a no-bullshit view I want to share about the experiences, emotions, mental health issues I’ve gone through,” Xray-Ash says. “Things that people sometimes are scared to open up about, with the intention that hopefully, other people can relate to.”

Check out “Venlafaxine” below, and find out more about Xray-Ash via our Five Questions With segment.

My name is Xray-Ash. I’m an independent artist hailing from British Columbia, Canada.

My music is a blend of genres I love the most – hip-hop, R&B, and soul. My upcoming album, “2004”, which will be released on all streaming platforms on June 10, is exactly that.

I mix upbeat, guitar-driven hip-hop tracks with melancholic lyrics that work as a great juxtaposition, expressing my struggles with mental health.

Personally, I have been very busy since the start of the pandemic. I helped my parents build a garden in their backyard. From there, the three of us took on the project of building our own convenience store. Both projects were great learning experiences for me.

While working on those projects, I was also working on my album, networking with talented Canadian artists and producers, and collaborating with them to create new music.

Also, during early spring I completed my first documentary, titled “Wil Ksi-Bax̱hl Mihl”, which translates to “Where Fire Came Down”. The documentary centers around Canada’s most recently active volcano, the Tseax Cone, and compares local cultural stories of the volcano to historical and scientific data.

I’m going to cheat for this question and suggest a song currently out and an upcoming song off of my album.

For my currently released music, I would suggest “Venlafaxine”. It is the most transparent I have ever been regarding my mental health and it’s a song I am very proud of.

As for a song to look out for, I would highly recommend you listen to “Rose” off my soon-to-be-released album, “2004”. It’s a fun, upbeat summer vibe, which features the talented Canadian artists AHSIA and Slim Titty Ray.

I love this question because I love supporting independent Canadian artists. Two artists who are on repeat on my Spotify playlist are Slim Titty Ray and Jaylin January. Both artists have unique sounds distinct to them and have a lot of talent to succeed in their craft.