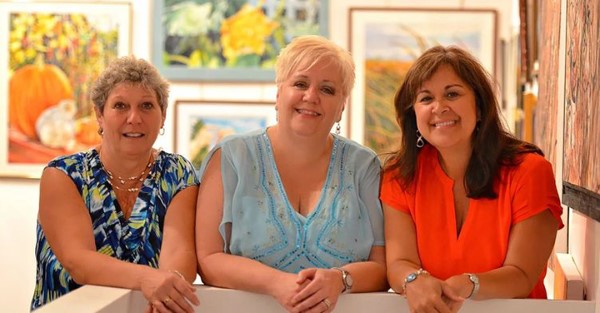 All-female Blind River, ON-based singer-songwriter trio, Women In Song reflect on the hopes and dreams of their parents who have suffered from, and eventually and sadly succumbed to Alzheimer’s Disease in this, their new single,  ”But I Knew Her When”.

The touching and ethereal song is the latest to land from the Ontario-based all-female group’s debut LP, Life of a Woman.

“But I Knew Her When” is a prime example of what to expect from Women in Song.

It takes chunks of inspiration from the likes of folk, pop, and country music and fuses them all together into something beautiful, and features an astonishing progression of chorus-heavy chords on the acoustic guitar, the soothing melody of an airy violin, and the beautiful, yet haunting vocal harmonies of singers Lois O’Hanley-Jones, Debbie Rivard and Patty Dunlop.

Though the tightly-knit troupe has been together for more than two decades, Life of a Woman serves as their premiere studio album. The record was released in mid-January and inspired by the ladies’ respective families, friends, and fans — from near and far. The concept of the 13-track album, according to the talented musicians, is the “reflection of the reality of our lives.”

“It speaks to women having a career and a family, having arguments with their children, having our children leave home and ultimately that we are good enough,” the trio revealed. “Our album is a perfect homage to women — to the Life of a Woman — as the title suggests.”

Along with the rest of the album, “But I Knew Her When” was written, recorded, and produced in Blind River at the local Riverview Studios. The ladies like to call the charming hamlet the “Nashville of the North.”

Check out “But I Knew Her When” below, and find out more about the trio via our mini-interview.

Patty Dunlop, Lois O’Hanley-Jones and Debbie Rivard are the trio called Women in Song. We are from Blind River, Ontario. We have been singing and performing together for over 20 years. Three-part harmonies are our signature while our music is a fusion of folk, country and pop.

We are all in our early sixties and all retired. We are fortunate that not only are we musically compatible but we are good friends.

We have finally ticked something off of our bucket list. After over 20 years of singing and performing together, we have recorded our debut album of 13 original songs. We started this project before the pandemic. However, because of the pandemic, we had several delays and road blocks. We finally got it done and we released our album in January, 2021.

The response has been somewhat overwhelming. Our album has become quite popular in Northern Ontario. We are a feel-good story in that it is never too late to realize a dream and to tick something off your bucket list! Our songs are relatable to the average person. Our songs are written based on our life experiences.

Our album is called “Life of a Woman”. It speaks to women having a career and a family, having arguments with our children, having our children leave home and ultimately that we are good enough. Our album is a perfect homage to women, to ‘The Life of a Woman’ as the title suggests. People have said the lyrics are uplifting!

In this time of pandemic when we can’t do concerts, this is a way for us to reach out! The album was written, recorded and produced in Blind River, Ontario – the town we call the Nashville of the North! We count every musician who played on the album as a friend.

We are honoured to be inductees into the Northern Ontario Country Music Association’s Great Northern Opry. We will continue writing new songs and look forward to the day when we get back on the stage.

Tell us about the recording process behind “But I Knew Her When”.

Thirteen years ago, Patty’s mother died from Alzheimer’s Disease. Before she died, we felt compelled to write a song that would encapsulate how we felt about having a parent who suffered from Alzheimer’s Disease. The song is called ‘But I Knew Her When’. The song has become even more meaningful to us, as Lois’ mother is in the last stages of the disease.
The writing process was very emotional for us and when we perform the song there usually isn’t a dry eye in the house.

Interestingly enough, ‘But I Knew Her When’ was not our first choice for a debut single release. However, the response to the song has been so overwhelming that we decided it was the right choice. It is the only single on our album where we incorporate a violin which lends a very sweet & hauntingly beautiful feel to the song.

The album was recorded at Riverview Studios in Blind River and produced by the owner, Ken Zoschke.

The highlight of 2020 was the writing and recording of our album ‘Life of a Woman’. We completed the album after talking about it for 20 years! Other good things have come from this particular highlight, i.e. increased publicity, online concerts, CD sales, streaming, and increased appreciation for our music.

Is there anyone out there you’d like to collaborate with or open/close a concert with in the future?

Here are a few people we would like to collaborate with or open/close a concert with: