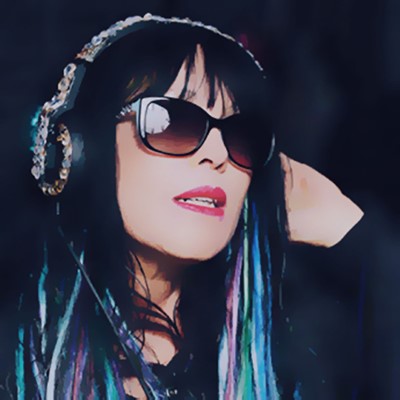 Canadian electronic music scene queen Melleefresh toasts her landmark and visionary 25-year tenure helming Play Records — and even longer as a veritable artistic force to be reckoned with in her own right.

Deemed “one of the pivotal figures in North American dance music” by Clash Magazine, the Toronto-based EDM dynamo has been a prominent avant-garde performance artist for the last 30 years.

As President and founder of the Play Records — the one through which deadmau5 was discovered and first signed to, and who she collaborated with as freshmau5 on many tracks, including the 2008 JUNO Award-nominated release, After Hours — Melleefresh has also collaborated with, including Dirty 30 (Alixander III), Billy Newton-Davis, Calvertron, Hoxton Whores, 40oz Profits, Gettoblasters, Jerome Robins, dj genderfluid, and more. She is an inimitable reference point for the cut-throat, competitive intersection that is music, business, and being a woman in the thick of it all.

“One of my first labels, Nepotism Records, had a motto of ‘Family, Friends, or F*** Off,’” she continues. “I guess I do continue to work more with people I know, but I have not had any major f*** offs!

“That said, it’s been a lot of ups and downs,” she continues, reflecting back. “There have been some battles… Some ridiculous lawsuits… And also some amazing collaborations and performances.

“To this day, I find the constant search for new talent to work with has always been so exciting! That, and to develop new genres of music.

“I am continually evolving as an artist, and always trying out new vocals and musical styles with every different artist I work with. It’s been such a great discovery process, both creatively and from a business perspective…

“I love the evolution of it all!”

Mellefresh’s extensive credits, accolades, and rungs on her resume continue to soar sky-high; never idle, she releases new music frequently — including her latest LP, Invincible, and a special series of Redux re-issues slated for this celebratory year.

Check out her music below, and find out more about Melleefresh via our mini-interview.

My highlight of 2020 was Invincible, my first completely new studio album since Secrets five years earlier. It was very much a reaction to the pandemic and the chaos that resulted from it. I was thinking about unity and positivity. How do I paint a bright picture at this moment in history?

The title of album’s lead single sums it up perfectly – Let’s Do It Together. And it’s done really well. It’s been one of Beatport’s Staff Picks since last August. And I teamed up with Princess Superstar to do another version of the track that incorporates her good vibe raps. It’s called the SuperFresh Mix, coming out the first week of July.

Same as every year – keep on keeping on and take it as it comes. I’m not really a careerist. I just keep going back to the well and pulling another bucket of water out. Last year, I released 20 original works of music and about twice as many remixes. So I guess, I’ll try to hit 21 original works in 2021. Hahaha.

I’m 4 deep so far – Sex Slave Redux, Bad Bad Bitch, and covers of Funkytown (with Hotknife and Pinkee Skylark) and Better Off Alone (with dj genderfluid.)

I have a collaboration in the works with Roland Clark that I’m really looking forward to. And I’m hosting Play Records’ 25th Anniversary Party (#PLAY25) which will feature DJ sets by some of the artists in our catalogue – JackEL, Kardano, Kasey Riot, Hotknife, Saxmode, SpekrFreks, and Spydabrown.

I really love Bob Sinclar. His smooth attitude as a DJ is otherworldly. He’s so fun to watch, even on a web stream.

Sofi Tukker are my all-time favourite DJ team. I love the way they seem to read each other’s minds. Talk about teamwork. The fun and joy they exude is contagious. I’d love to collab with them as well.

Also, I would love to do a show with Ali X and Ximena in Mexico. Those guys are my pals and really fun to work with.