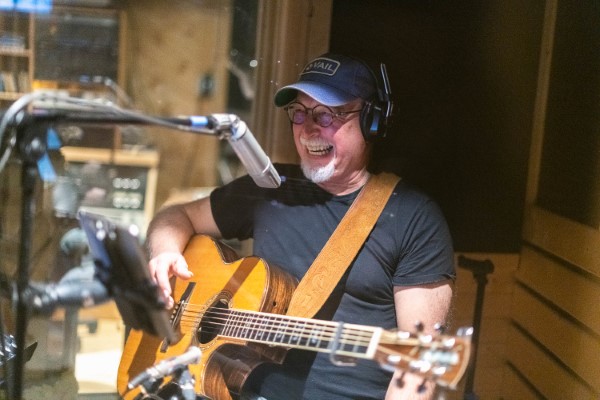 Whitehorse-based singer-songwriter Glenn Chatten will be releasing his seventh album, Baked Café on May 7, but all of you lucky folks get a sneak peek at the album! The album is full of folk songs, blues, and acoustic guitar instrumentals.

From the opening track, “One Land”, all the way to the end of the 14-track release, the listener is taken on a heartfelt, folk-filled journey with expertly finger-picked acoustic songs.

Check out the album below, and find out more about Glenn via our Five Questions With segment.

Absolutely! I’d be honoured and thanks for this opportunity.

I guess you could say I’m a veteran Canadian singer/songwriter/guitarist or perhaps even a “late bloomer” in the music industry as most of my albums have been recorded in the last 10 years after the ripe old age of fifty – my first album (recorded at Cedartrees Studios in Kitchener Ontario) came out in ’83 and I toured extensively for about three years after that until family obligations took over my focus with three wonderful children and I decided to go on a hiatus from music for about, oh, twenty years or so. I got back into it when I moved to Vancouver in ’06. There, I met some great supportive people in the music business – friends like Steve Dawson, Shari Ulrich, Chris Ronald, Don Alder to mention a few and they inspired me to start up again as both an instrumental guitarist and folk singer/songwriter. I remained in Vancouver for a little over ten years recording five albums and hosting several local festivals and songwriting shows in the city. I moved up to the Yukon in 2017 after falling in love with both the country and the gal who lived there. My latest album, Baked Café, which is produced by Juno award-winning, Bob Hamilton, is mostly about my experience living in this beautiful part of the world and how I got there.

I think you would call my music and writing style an eclectic mix of Folk, Blues, and Jazz music. I’ve heard some call it “progressive folk” as well. In any case, it sits predominantly around my acoustic guitars and finger-picking style of playing. In most of my songs and compositions, the “groove” or rhythm is essential to how the song is initially created. Usually, the chordal/harmony with the many open type tunings I use is the next building block, followed by the melody line and usually the lyrics (if I so choose) after that. I guess you could say, for me, its all about the groove first. The songs take on the “Folk” aspect because they usually focus on meaningful themes or stories from my life’s perception things like the treatment of refugees, or aspects of being a human being in this sometimes-crazy, upside-down world. I’m an instrumentalist as well, so sometimes I just let the music happen through my guitar without worrying about adding words or thoughts to it. My last album, Dragonfly, did surprisingly well as a purely instrumental album and I received a CFMA nomination for it which was totally unexpected and wonderful at the same time.

Well, speaking of crazy upside-down worlds, I need to be completely honest in that I really haven’t been “creative” at all during this Pandemic (at least from the perspective of creating new music)! When Covid 19 hit, we had finished recording the bass tracks for this new album in Whitehorse and were amid arranging the background vocals and other instrumentations (attempting to do so by bringing local artists in). Honouring the isolation and protocols that were associated with the Pandemic were very challenging and time-consuming. As it was for everyone in the music business, I lost all my scheduled performance dates and haven’t been able to book anything into basically an uncertain future. Also, my wife and I moved into our new log home and began renovating for a new studio (seems like a lot of people have focused on renovating their homes during this time as well) and we got a new puppy (which again seems to have been a Covid phenomena too). All these things have taken a chunk of time away from my creative music, but I’m sure I’ll be able to get my chops back quickly when the time comes. I did it before and I can do it again!

Umm, that’s a hard question to answer because it really depends on what the perception of that listener is. But one experience we all share as Canadians is that of cold, dark winters.

First, hands down, Bruce Cockburn, always has been and always will be! Next- Great Lake Swimmers, UZEB, Harry Manx, and Colin James!