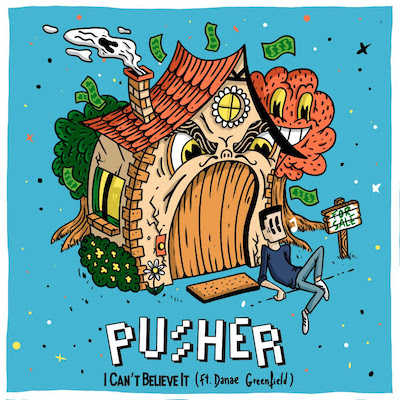 Earlier this week, Toronto-based electro-pop artist and producer Pusher drops the newest anthem for millennials everywhere with “I Can’t Believe It,” featuring keyboardist Danae Greenfield. Accompanied by a comedic music video where Pusher enters a luxurious fantasy world of mansions and money from his van in a parking lot, the track takes a lighthearted approach to the often burdensome topic of breaking into today’s housing market.

On his inspiration behind the track, Pusher says:

“I Can’t Believe It is a very fun song about not being able to afford a house, and feeling behind where I thought I’d be in life. I was mostly thinking of how astounding it is that my parents were able to buy a big house with an acre of land for like $80k in the 90s, while I was sharing a 650sqft concrete condo at the same age. The real enemy is capitalism and my weapon of choice is this funky bop. I was also fortunate to get Danae Greenfield to play an incredible keyboard solo feature on it. There’s also a video where I play two characters – one living in a van, and one dancing around a mansion in a money-print suit.“

With over 50 million catalogue streams, Pusher has amassed a devoted following with his socially conscious, genre defying electronic music that calls out our collapsing civilization. His eclectic style has received tastemaker praise from the likes of Billboard, Paper Mag, Indie88 Stereogum, Complex, Hypetrak, YourEDM, This Song is Sick, and Acid Stag while also charting on Billboard Dance/Electronic, Spotify Vi-ral, iTunes, CMJ RPM, CBC Radio and HypeM. He’s toured with acclaimed artists such as The Chainsmokers, Zeds Dead, and Phan-toms while his music has appeared in television shows such as Broad City, Siesta Key, and The Ellen Show.

Pusher’s upcoming album Stay-At-Home Popstar is a tongue-in-cheek, optimistic, nihilistic, dissatisfied, apocalyptic, electronic album that is sure to elicit the familiar experience of isolation experienced over the past year.