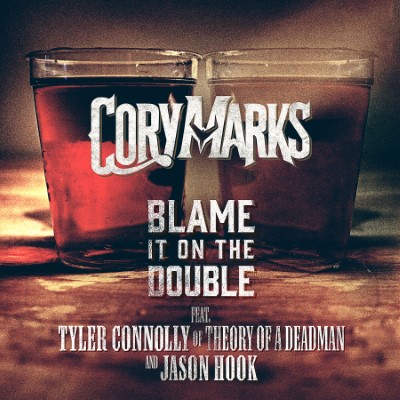 Cory Marks has been making waves as a singer-songwriter for years with a string of great singles and with the release of his full-length album, Who I Am. And, while we’re all still dealing with the reality of the pandemic and the restrictions it has brought to us – Marks has gone ahead and given his fans something to smile about with the release of his new version of “Blame It On The Double” featuring Tyler Connelly of Theory of a Deadman and Jason Hook.

His other big news (and his launch to worldwide fame with this crossover success) – his single “Outlaws & Outsiders” has been certified GOLD. This track became a global hit with over 15 million views worldwide. It trended globally on the Shazam discovery charts ranking among the greatest songs of all genres proving that the appeal of country-rock music transcends beyond genre lines.

By mixing country music with the hard-hitting stomp of rock and roll, Marks has made a name for himself internationally. I caught up with Cory Marks, via email, for a quick little chat about this amazing news, through Canadian Beats. I want to say thanks to Cory for taking the time for this hang. Check out what he has to say.

Let’s chat about the release of your new single on April 30, a new version of “Blame It On The Double.” It’s got a real rock vibe to it (more so than your original release). Being a ’70s rock girl, I LOVE this version.

You note that “Blame It On The Double” is the perfect country-rock anthem going into the weekend.” Can you explain further?

“Blame It On The Double” is the perfect country-rock anthem going into the weekend because it just makes you feel good and want to let go of that hard week. It makes you sing, drink and just want to have a good time, maybe get into a little trouble too 😉

What made you decide to release it again?

I just love this song and I think it needed to be heard, it’s a great radio single with great features.

How and why did you decide to bring on Tyler Connolly of Theory of a Deadman and Jason Hook as featured artists?

Well, first of all, they are both great dudes that are very good at what they do. Jason and I have wanted to work together for a while and I’m sure this won’t be the last. He is also one of the greatest guitar players on the planet in the hard rock world with his unique style and tones not to mention a great songwriter! Tyler Connelly’s name came into the picture when presented from the label as a potential feature but I knew he was the guy for this song. I would hear a lot of Theory Of A Deadman on the radio growing up and I still do! They have had many great hits both in Canada and the USA with a great global following. He has a great rock voice and kicked ass on this song in true Tyler Theory fashion!

Tell us about how it was produced, with all the restrictions that are in place right now.

Well, since Kevin, Kane Church and myself wrote, recorded, and produced it in 2015 “Blame It On The Double” was already done and ready to rock. Tyler loved the song and you can really hear it in this one and Jason wanted to play on this song for a long time. Once we got them confirmed, Kevin sent them the tracks, Tyler did his thing at his studio in L.A and Jason being in Las Vegas went to see Kevin at The Hideout and laid some serious guitar down!

First off … WOW … “Outlaws & Outsiders” has been certified GOLD. Your first GOLD certification. It’s also hit the Top 10 at Rock radio in the U.S. and Top 12 in Canada … congrats on all of this Cory.

This was the first song you wrote (featuring Travis Tritt, Ivan Moody, and Mick Mars) with Kevin and Kane Churko for Who I Am. Tell us all about what went through your mind when you found out this stellar news.

Well, first off, a GOLD-certified record is a huge milestone here in Canada especially on a debut single during these difficult Covid times in just over a year. Where as an artist you’re literally unable to tour and perform the songs live for those very people who bought, streamed, or downloaded your music so I’m very proud and thankful for that. It really showed me that the people are connected to this song and that people are loving it and wanting more of this country-rock sound on a global scale. HUGE thank you to ALL the radio stations that played this song especially these three beautiful countries for giving me my first big radio HIT: #3 in Germany, Top 10 at US Rock radio, and peaking at #12 here in Canada.

Do you believe that the music video for “Outlaws & Outsiders” having over 15 million views really pushed the single to GOLD and why?

I mean sure it did! But it all really helps and I’m very thankful for it all. 15 million views on YouTube and another 9.7 million via Facebook but almost 16 million streams on Spotify alone and even more between all other platforms like iTunes, Apple Music, Amazon, and Deezer adding, downloading, streaming, or buying the song!

Who I Am (reached over 33 million streams across all platforms) including your single “Outlaws & Outsiders” has been called “the long-awaited next-generation country rock record” by Billboard. To read a statement like this must be a dream come true for you. You’ve worked hard to get to this point, but did you ever think that your music would become such a huge sensation worldwide? This is quite an accomplishment.

It really is a dream come true for me. Seeing the love for my music on a global scale is insane but I love it! It’s clear and proves that people are not only loving this music but also wanting even more of it … and I can’t wait to give it to them.

What would you to say to your fans and supporters for helping making your dream come true?

All I can say is THANK YOU and I really can’t wait to see you and play for y’all again!

Last, but not least … on April 2, 2021, another life-long dream came true when you passed your private pilot flight test. And, you were the last private pilot to graduate from MAG Canada (Sudbury Flight Training Centre). Huge congrats on this other great accomplishment in your life.

How did it fee for you when they presented you with your licence?

Well, there are two parts to the license. The flight test and the written so I’m still waiting on my official license in the mail but the flight test was a huge step and bucket list moment for me indeed. Total dream come true and I’m excited to do a lot more flying and continue learning, becoming a better aviator.

UPDATE: Since I last chatted with Cory, this happened (taken from Cory Marks Facebook page):

“The pure joy aviation gives me. Today April 21, 2021 – I wrote and passed my navigation exam, the last piece of the puzzle. It’s been a long road but a damn good one making incredible friends helping me achieve this dream. I can finally say … I’M A PILOT!!”

We, at Canadian Beats, want to say to you Cory … Congratulations on “earning your wings! Soar and fly with the best of them.”

What it’s going to be like for you be able to fly a Cessna C-172 on your own?

Well, I’ve got just over 20 hours as a pilot in command already and over 100 hours total flight time throughout my years of training on four different types of aircraft. The Cessna C-152, C-172, The YAK-52, and the mighty Canadian Forces Snowbirds CT-114 Tutor. I gotta say being up there strapped to a pair of wings looking down at this beautiful planet is truly an amazing feeling that never gets old no matter what you’re flying!

We, at Canadianbeats.ca, thank you Cory so much for taking the time for this interview. To see you grow as an artist, well … I am just so thrilled for you and am even more excited to see what else the future has in store for you. Congrats Dude!

Thank you for your support and great questions!! Best wishes – Cory Marks

Stream or download “Outlaws & Outsiders” (as part of the Who I Am album) here.

Stream or download the new version of “Blame It On The Double” here.