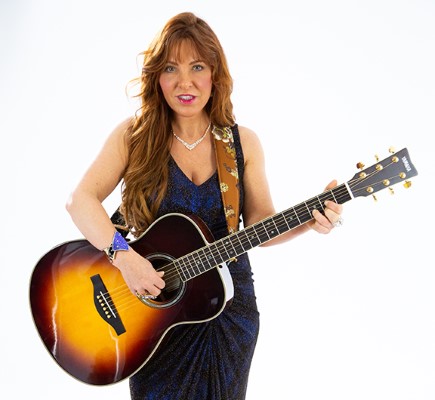 Smashing the previous record of 57.9 Hz A#1, the British Columbia-based singer/songwriter unveiled her current record of 33.57 Hz C1 for the win.

“I’m honoured and excited to hold this official record with Guinness,” Chapman shared of the results. “And that said, I plan to break it! Normally, I go way beyond to being recorded at E0 20 Hertz, and with a recording high of C10.”

Featuring singles “I Don’t Wanna Dream Without You,” “Could’ve Been Yes,” and more, the 15-track offering makes way for the Surrey-area artist’s inventive and genre-bending old-meets-new sound: retro-modern country music.

“I developed a wide vocal range in grade school, and I grew up having a mother who was a music school teacher,” she shares of her journey and ability to cover everything from high soprano to alto, tenor, and even bass. “From there, my love for writing and doing poetry became a source of inspiration that pushed me towards a music career.

“Footprints In My Songs is my fusion take on the old-school country sounds,” she continues. “It showcases my more humorous and introspective, inspirational side, and takes listeners on a rollercoaster ride of emotions.”

Check out the video for her World Record below, and find out more about Joy via our mini-interview.

I’m a Canadian singer/songwriter/tribute artist, small town, farm girl moved to suburbs of Vancouver.  Love to write songs from a humorous or introspective side of everyday scenarios we all come across in life. If you’ve experienced something, chances are, I’ve written about it and hope I make you laugh or cry about your situation.  I’m trying to move country from the overdone scenarios of it’s all about, “party”, “drinking”, “red-neck, dirt roads”, to a more closely aligned writing style with Dolly Parton or fun of Shania Twain and old Taylor Swift. I say to boyfriends, “make me mad, 10 minutes later I’ll have a song”.  That’s why I came up with the term for my “genre” as Retro-Modern Country. There’s a bit of genre mix, I have one that’s more Classic Rock, one that’s a fusion of country-pop/EDM,  a 1960’s doo-wop throw-back, and a Gospel tune. I can mimic, so essentially, I could write in any style. I just listen to the way certain songs are done, and my brain will start to write in that style. I’ve been hearing complaints about the “formulaic” way music is written these days and hard to tell one singer from another. I tried hard to break that mold, although it’s going against the flow for radio. It will be interesting to see who’s brave enough to play me, I think it’s time for a bit of “Retro” sound to make a come-back. When we played live, the crowds want the old familiar songs, very few new ones requested. That’s when I thought, why not make “new, old” sounding songs, and Retro-Modern Country was born.

Tell us about the recording process behind the world record?

The inspiration for the world record was me giving voice lessons to my niece and nephew.  In years past, the vocal coaches I had would comment that it was “freaking them out” as I kept going lower. I said to my niece, “I wonder how common it is for someone to scale off the end of the piano”? She did some research and excitedly said “the world record was only a “D2″ and you sing way lower than that”! As it happens, that record had been broken but is very hard to find. Unless you are going for a record, you wouldn’t know that it was now 2 and 1/2 notes lower, at a B#1 at 57.9 hz. Still, not really a problem for me.  My team decided it’d be a good idea for me to do the record since I had the “freak factor” to do it, and would help with getting me media attention for my album coming out.  As you all know, in the music industry these days, it’s hard to set yourself above “the noise” of all the music that is put out right now. Getting put on Guinness’s site, as well as on numerous TV shows, international news, The Tonight Show, is great publicity that you can’t pay to get.  There are a lot of super talented artists out there, and all of us struggle to get “heard” or get our “shot”. You can have great music, but if nobody knows you, it often will not get heard by very many people. I feel blessed to have an unusual “talent” that gives me a bit of an edge.

What’s the process for a world record? Not easy! First, find equipment that will record and measure in sub-bass range. AKG C 414 XL11 reference level microphone, Melda MAnalyzer for sonogram hooked up to pro-tools run through SSL audio interface and ran through a Furman power conditioner. Then find engineers that can actually read the sonograms and in a pandemic. Thousands of takes, practicing and seeing how low and accurate I can go.  The engineer’s Dave Lopez and Jimmy Crowley working hard to get the settings to read the attempts accurately, and frustrated as they could tell I was going past 20 hertz but we can’t read it past there. The difficult part of the attempt is you have to accurately scale a minimum of an octave above the low note you hope to achieve. Then you have to do it acapella with only one starting reference note. Since I’m going so low, it becomes increasingly difficult to hear and accurately do these notes.  A lot of practice and “feeling” your way down, with bio-feedback from the sonogram to know you are doing it correctly. Guinness also has very strict guidelines which you have to adhere to perfectly, one error and its start over again. Two certified sound engineers, two music experts, a notary, videographer/photographer, video the entire time. I had to be on camera, non-stop, a minimum of an hour prior, to prove nothing was ingested. No candy, gum, or anything allowed prior, only water. Remember to pee before the hour starts and don’t drink too much water, cause the camera is going with you….lol!

As it happens, on August 1st I managed to hit a high of C10 then repeatedly crashed the E0 20 Hertz. I guess there were both highs and lows that year, just like life. There weren’t a lot of great moments that year, as one can imagine. Knowing at the end of 2020 we were starting to do the album cover photo shoots, so I could finally get this album and all the singles released in 2021, I think that was the highlight. After many stalls, having done the recording in the fall of 2017, a relief to fulfill both promises, to my two now-deceased husbands, that I would continue on in music and finish my album. Between their deaths and almost dying myself, it’s a relief to have finally gotten it out as well as doing the world record.  I wanted to have, as in one of my songs, “treasure, in the things I left behind”.

I’d love to get my songs finally on the radio.  Building my social media presence, since I’m a newbie at that, learning as fast as I can. I would like to get known for my writing and do work for other artists, as well as some voice-over acting work. Dave and I are working at building the right musical team so we are future tour ready and hoping to start live-streaming shows soon. It’s hard as an independent artist, made harder with Covid, to self-fund projects.  Anyone who knows how to grant write, appreciate some help as I’m burning through my retirement savings to do this project solo. So far, everyone gets paid except me, lol. Videos, recordings, Guinness Records, they all cost a huge amount of money. I sold my house and moved in with my Dad (83) to look after him, I’m gambling that I can make a go at this. I can’t do my previous career of owning a health/wellness spa for 30 years as a tragic car accident took that away. I’m really hoping for a break as other job options aren’t an option for me, and music is my passion.

Lots of Canadian icons like Shania Twain, Anne Murray, Celine Dion, Sarah McLachlan, Bryan Adams, Michael Buble. I’d say at present, Dolly Parton, she seems like such a beautiful, down-to-earth person, and her writing style is epic. I’ve re-written her Jolene song as a response to her original. It’s a conversation as Jolene writes Dolly her side of the story back in a letter, “Yours, Jolene”. John Larrivee Jr. custom-made me a guitar with a Goddess inlay on the headstock. The only disappointment is somehow the hair colour got messed up and didn’t come red as specified. Hoping to get that corrected soon. I was dedicating the guitar and naming her Jolene. As you can tell, I am Jolene with auburn hair and eyes of emerald green. Love to do a duet with Dolly, she sings a verse, “Jolene” sings the response.