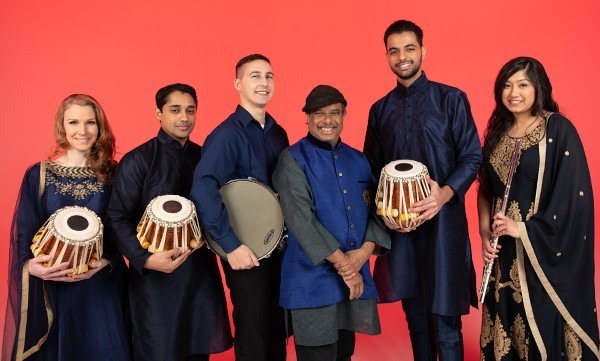 Toronto Tabla Ensemble are back with their new video for “Maryem’s Here”.

Fresh from their most recent release, Unexpected Guests, the track and video bring diverse musical traditions together — from Indian classical dance to Japanese drumming, to Arabic singing, and Western classical instrumentation.

The goal is simple: create compelling music and showcase it with visual flair.

“This album is a simple one,” says Ritesh Das, the 62-year-old tabla virtuoso, composer and educator who leads and founded the JUNO Award-nominated Toronto Tabla Ensemble. “Most of the tracks are in very straightforward 4/4 grooves. On our other albums, you had tracks with different time signatures that made it really intellectual and complicated. But I wanted this one to be something that anyone can sit back and listen to.”

‘Simple’ here doesn’t imply any sacrifice in musicianship; “Maryem’s Here” dazzles with virtuosity in its performance, interpreted with an emotional heart that connects with listeners.

The tabla forms the basis for TTE’s signature sound. In “Maryem’s Here,” the violin (played by Raaginder Singh Momi) and Japanese taiko drums (by noted ensemble Nagata Shachu) join the traditional Indian percussion, while Maryem Hassan Tollar — the Cairo-born, Toronto-based vocalist who has carved a unique career as an Arabic-style artist with a reputation for genre-bending collaborations — brings a mastery of technique and tone to the table.

The blend of musical traditions and instruments, vocals, and dance is seamless, building to emotional highs and, while the time signature may be simpler than usual for TTE, the layers of rhythm and musicianship are palpably anything but. As for the video, a bejewelled Indian classical dancer captivates the eye while Tollar’s haunting vocals add a mesmerizing melody.

Check out “Maryem’s Here” below, and find out more about TTE via our mini-interview.

My name is Ritesh Das, I am the founder and artistic director of the Toronto Tabla Ensemble since 1991. I am a music teacher, composer, great husband and chef, adore my pets who are 2 cats and 1 dog.

Tell us about the recording process behind “Maryem’s Here”?

The tabla parts were written out and analyzed and then passed it over to the Japanese Taiko group (Nagata Shachu) who matched the exact strokes and composition in the beginning of the song. Once that blossomed the piece itself took its own journey. After the rhythmic section was complete it was sent to Raaginder Singh Momi, a young North Indian classical violin virtuoso based in California. The melody of the violin had a Middle Eastern feeling so we asked Maryem Hassan Tollar to complete it with her vocals.

The title of the song was inspired by the album name ‘Unexpected Guests’ with the arrival of Maryem.

Even though the onset of the pandemic halted all of our regular way of doing things, it pushed me to be more creative with not just my tabla classes but also composing, collaborating and showcasing virtually. Seeing not only the TTE but also the Youth Ensemble growing. overcoming obstacles and continuing to push forward is very satisfying.

At the end of 2020, I took a bold step from being in Toronto for over 30 years and moved the family to London, Ontario. I would like to continue with my vision of how I started in Toronto with training students, recording, showcasing here in London. To expand our audience and collaborate with other musicians.

Jeff Martin of the Tea Party! Collaboration of rock and rock and North Indian Classical rhythmic style. We started working together in the late ’90s and early 2000s, performed all around Canada, Ireland, Norway, and Australia. We lost touch for a few years but recently picked our conversations back up and would love to do something completely new and exciting with him again.