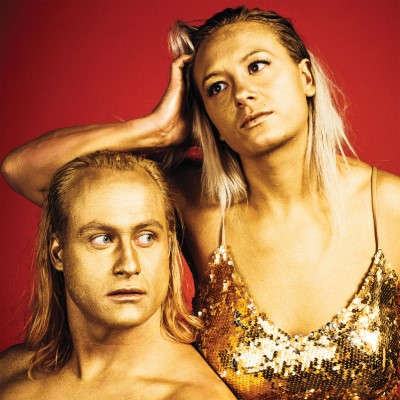 Calgary-based Miesha and The Spanks released their Singles EP on April 16. The guitar-and-drum garage rock is composed of front woman-guitarist Miesha Louie and drummer Sean Hamilton.

The EP was initially meant to be a mixed tape of self-serving, standalone tracks for radio and licensing produced by Western Canadian Music Award-winning artist/producer Leeroy Stagger. Instead, it became a collection of songs influenced by the immediate life-changing effects of life during lockdown.

Their lead single “Mixed Blood Girls” was released on March 26 and tells the story of Miesha’s story as a mixed Secwépemc girl from the East Kootenays.

“I Want Fire” is sure to be relatable to funas with a catchy as hell chorus, conjuring the urge to explode we’re all feeling after a year of restrictions and lockdowns.

The band’s mixture of punk, garage, and hard rock and straightforward lyrics is inspired from proto-punk classics like The Runaways, MC5, and The Stooges, and 90s riot grrrl/grunge like L7 and The Gits. Their gritty production and hard-hitting performances have allowed them to reach #1 on earshot!’s National Loud charts and brought home Rock Recording Of The Year and Single Of The Year (Summer Love) after the release of their 2018 LP Girls Girls Girls. It also secured Miesha as Female Artist Of The Year.

What made you decide to release an EP instead of individual singles?

We sort of did both! We’ve been releasing singles as we lead up to the EP: Unstoppable in July, Wanna Feel Good in September, I Want Fire in February, and then in March, we released Mixed Blood Girls! We released Unstoppable early because we didn’t know when we would be back in the studio to finish the EP, or when we would be back on the road, or if any of our rescheduled festivals would actually happen. We wanted to put some content out there because it was one of the only things we could do with all of that uncertainty. Then we just kept them coming every three months or so. We held off on the EP release once we finished production because we were really hoping to tour it – but it could be another year before that can happen, so we are done waiting!

What does it mean to Miesha to be releasing a song about her experience as a mixed Secwépemc girl?

I wrote the song to share my experience, hoping I wasn’t the only one who felt displaced and disconnected being mixed race – not even necessarily mixed Indigenous. There’s an obvious privilege that comes with being white-passing, but it isn’t without its own set of issues. How messed up is it to be told as a kid you’re too pretty to be Indian? Or have your racial identity decided for you? Putting myself and my story out there like that left me pretty vulnerable. But now that the song’s been out over a week, I’ve felt overwhelming support and connection. People have been reaching out with shared experience, and in a roundabout way, I’ve actually connected with some distant family. When I’m writing about my troubled family in the song, I’m talking about the immediate aunties and uncles and cousins. But I’m Kinbasket, and I’m now talking with cousins 4 or 6 times removed, and there’s so many of them out there, and that’s very powerful.

How is this EP different from your previous releases?

It’s a pretty long EP for one thing, at seven songs. I think our last EP was 2! This is also only the second recording with Sean on drums, and probably the most collaborative writing we’ve done so far. The difference was supposed to be that the songs were isolated, standalone tracks, meant to be used. We just wanted to release something small and transitory before we got to work on a more conceptual full album. That’s still sort of true, but it mutated a little when we had all the extra time after lockdown. We had our first session the week before Covid shut everything down, and had only tracked Unstoppable and SOS so far. The next opportunity to record wasn’t until late July, and that time allowed for a lot of revisions and some completely new material, and it was all becoming influenced by the lockdown itself – our new lives in isolation and the thought processes and reflections that came with all that extra time to think. Working with Leeroy Stagger as Producer really helped us get to the heart of the songs, and not just pump out hooks and stuff that sounded good. There’s a lot more meaning to Singles EP than we initially intended, and I think you can hear that.

What do you hope the EP offers fans after a hard year?

Some of these songs were written to pick me up, like Unstoppable and I Don’t Care, so I hope that rubs off on some folks. There are relatable tunes about life with your partner when you’re stuck inside and losing your fire and driving each other bananas. I wouldn’t say that Singles EP is gonna kick you in the butt and pump you up, but I think if you need to rock out and let loose and clear your head by singing or shouting along to something loud and catchy, this might be the ticket.