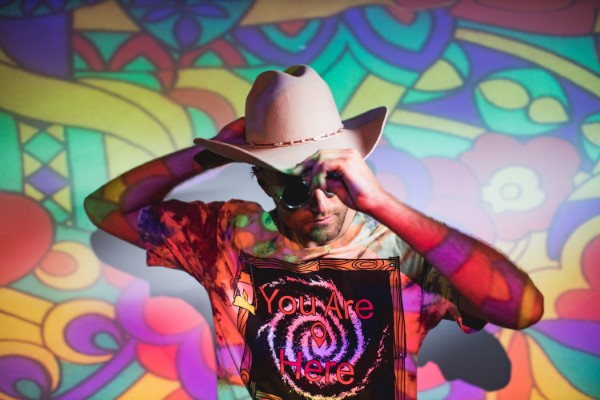 On April 23, Rich Aucoin‘s Deluxe Version of his acclaimed album United States became available to stream or purchase on all platforms. Aucoin has also shared the video for the album track “Eulogy Of Regret”.

“I’m excited to share this video and finally release this track as a single”, says Aucoin. “This was the last track written for the United States and was the only one not conceived somewhere while on the bicycle. I wrote it for director/musician/multi-disciplinary artist Dustin Harvey. Dustin hired me to write a 7-minute version of the song for a short film/theatre piece he was working on called How Quickly Things Change. I liked the song and ended up cutting a track for the United States so “Eulogy Of Regret” could take its place. Now, full circle, Dustin and his team have made a shorter piece which also doubles an appropriate music video for the song. Some excellent animation by Aiden Searle and acting by Stephanie Yee.”

Out now via Haven Sounds, the deluxe version of United States includes three new remixes of album tracks from Double A, Steve Bays, and Shmu, and a bonus disc featuring instrumental versions of all the album tracks.

“I’m really excited to include the album with these remixes as well as releasing all the instrumentals for the first time,” says Aucoin. “Howie Beck’s (Charlotte Day Wilson/River Tiber/Feist) mix really shines in the instrumentals too. It was great to work with someone on back-to-back records as we’ve got a great workflow established. Since I wrote this record on my bicycle to demo versions of these instrumentals while cycling across the United States, people can now hear what I heard over and over again as I figured out the lyrical content while observing my surroundings in 2018.”

Rich is also releasing his first NFT with an unreleased track composed for a friend’s student film at AFI. The track is a single copy. The instrumentation is Vibraphone, Hammond Organ, Piano, Electric Bass, Drums, Percussion. Recorded and performed by Rich in 2006.

Aucoin wrote United States, observing America from the ground level while cycling across it for Mental Health America and the Canadian Mental Health Association. While taking this Robert Frank approach, Aucoin composed a song for each of the 12 states he pedaled through. The record is as much about the current socio-political climate of America as it is about states of consciousness; as much fuelled by the burgeoning American protest movement or Hedges’ social commentary as it is fuelled by McKenna/Pollan world of psychedelics and meditation apps.

Rich Aucoin has never been short on ambitions or concepts. From his first EP, Personal Publication—on which he played over two dozen instruments and wrote it to sync to How the Grinch Stole Christmas—to We’re All Dying to Live’s 500 performers, to his death mediation Release, the pop anthemist has always dug deep and gone big. But this is the first time he’s written a record from the grounds of a crumbling empire. In the spring of 2018, Aucoin set off from Los Angeles on one of his customarily challenging (and eco-friendly) tours. Final stop: New York City. Vehicle: Bicycle.

He traveled the perimeter of the United States, down the west coast, across the south, and up the eastern seaboard. He saw a country, two years into a dictatorship, divided and hurting. A pair of wheels and his own two feet took him through landscapes varied in their construction and grandeur, from the boarded-up storefronts of Route 66 to the fountain formation of Red Rocks. Tiny towns and major cities. Thriving and fading.

Aucoin has been long-listed for the Polaris Music Prize twice. His music video for “Brian Wilson is A.L.I.V.E.” won the Prism Prize. Aucoin has built a reputation as one of the best live shows in Canada according to CBC Radio3. His albums all sync to old movies like Pink Floyd’s Dark Side of The Moon with The Wizard of Oz. He has performed dozens of festivals including Osheaga, The Great Escape, Les Eurockéennes, Berlin Music Festival, Art Basel Miami, Luminato Art Festival, Iceland Airwaves, SXSW, and Pop Montreal.