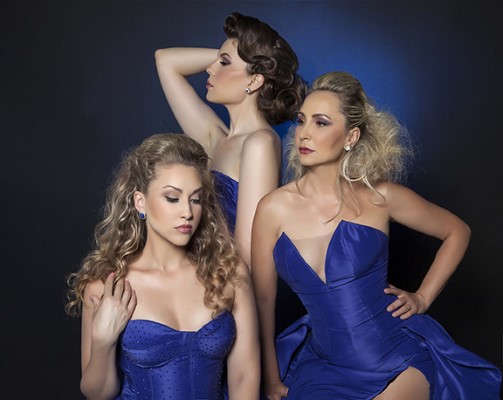 The three-piece’s two sopranos Anna Bateman and Katya Tchoubar, along with mezzo-soprano Erin Fisher, discovered a rare silver lining in the interruption of their international touring schedule due to COVID-19; the newly-freed up time meant they could create some new musical masterpieces to follow their breakthrough debut, Nothing Else Matters.

Telling the ancient sailor’s tale of the ‘Siren’s’ hypnotic voice and powerful lure, “Siren Song” instantly surrounds, haunting and hypnotizing from start to finish between its electronic mixing and multi-layered vocal mastery.

“Anna naturally has the highest voice in the group,” Tchoubar shares and jokes of Bateman’s role as the song’s ‘siren.’ “We usually refer to her as the dolphin of the group!”

“She’s not wrong!” Bateman laughs. “My voice is just happy there.”

Featuring the three artist’s signature powerful vocals, “Siren Song” serves as a preview for what’s to come with ViVA Trio — both with this single and their forthcoming sophomore and third release; currently being finessed in tandem, the two albums reveal a new yet familiar sound, style, and story for the Mississauga, Ontario-based group.

“Cinematic, electronic, ethereal, and dramatic are some of the words I would use to describe the sound we are creating for this next push of music,” Fisher shares of “Siren Song,” and beyond. “We’re pouring all of our creativity into these upcoming releases.”

“It’s been a while since any of us have done character work on stage,” Tchoubar hints. “We’ll be leaning into our roots, and we look forward to revealing our hybrid show — blending a concert with mics with a staged show featuring a full plot line.”

Check out “Siren Song” below, and find out more about ViVA Trio via our mini-interview.

ViVA Trio is an award-winning, classical crossover group who has toured Canada, the United States, and Europe. We are an all-female vocal group who is expanding the boundaries of the CC genre and is embracing a new fusion of sounds in our latest release SIREN SONG, and in our upcoming releases through 2021 and on.

Tell us about the recording process behind “Siren Song”?

Siren Song was an entirely different process for us being that we are and have been in lockdown in Ontario for most of the past year. Usually, we would all meet in the recording studio and have sessions together where all the creative juices would flow. This time we had to get creative in a different way! We have each had to get our own small recording studios going at home where we recorded individually and then send our stems back to Katya who did a rough edit and then sent the track back to us so we can make changes etc. When the song was in a place where we were all happy with, we sent it off to Dima Graziani who mixed and mastered the track for us. The process takes a little longer and has more challenges as we cannot experiment as quickly or change things on the fly, but we agreed that we must go ahead and continue to create, even during this time of uncertainty due to Covid-19.

The highlight for the three of us in 2020 was our Canada Day Virtual Special. We hosted, recorded, and performed with a number of AMAZING Canadian talent. We decided to arrange, record, and shoot a collage video of all of the artists singing our country’s anthem together.

Graham Scott Fleming, international singer, and actor, who has headlined the New York Musical Theatre Festival. Rachel Luttrell, an accomplished singer and actress who starred in the Sci-Fi series Stargate: Atlantis, and Russell Braun, MET Opera Baritone regular who was recently appointed Officer of the Order of Canada. He has also recorded JUNO Award-winning and Nominated albums and GRAMMY-nominated for Mahler’s Das Lied von der Erde.

All of us sang and recorded from our own homes, and created our collaborative version of “O Canada”.

We have huge plans for 2021! Now that we have released SIREN SONG with success, we are writing a new concept album of all original music. We will be collaborating with a wonderful producer in the UK named Ryan Louder who has been giving us a lot of creative inspiration. Louder has worked with some big talent before such as Dido, Anastacia, and Eurielle to name a few. There is also a stage show that we are creating alongside the album that portrays the storyline of the music. It is going to be a beautiful show of music and stunning multimedia visuals.

There are SO many people that we would love to work with. Last year alone we definitely ticked a few of our favourite collaborations off in our Canada Day Special.

With the new direction our music is taking us, it would definitely lend itself to collaborating with Sting. His sound is so timeless and he has the incredible ability to fuse his unique sound with so many different genres. That would definitely be a cool collaboration!