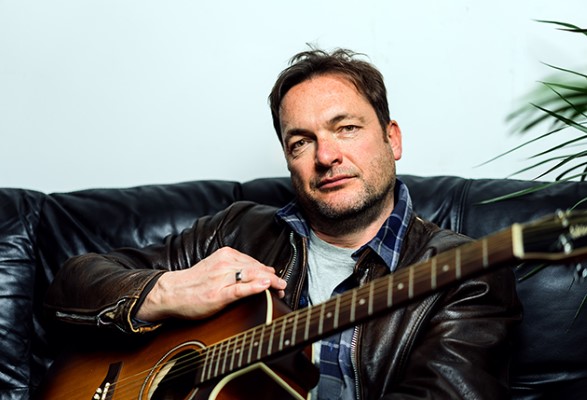 Rife with Ronald’s signature sound and Songwriter of the Year-nominated lyricism, the song serves as the first preview for the Vancouver-based artist’s forthcoming emotionally expansive album, Light & Dark (Borealis Records).

Leaning slightly towards a more rootsy sound, powerful vocals and musicianship across the board (guitar, harmonica, and ukulele) offer a well-rounded folk-Americana, roots-rock release that landed just where Ronald — and his long-time collaborator: award-winning, Platinum-selling and chart-topping producer, engineer, songwriter, and multi-instrumentalist John MacArthur Ellis — set their sonic sights a few years ago.

“The track listing includes a few rewrites of songs that originally appeared on some of my early demo albums,” he continues. “There are also more recent compositions, including ‘Old Lover,’ which was co-written with my brother shortly after the first COVID-19 lockdown.”

Beyond “Old Lover,” the pandemic played a larger role in shaping the terrain for Light & Dark — from lyrical nuances, to navigating strict restrictions for recording, to the untimely passing of Ronald’s father within it.

“Songs like ‘Please Don’t Come For Me Now’ and ‘Bones’ took on a particularly new poignancy for me,” Ronald shares of the previous year’s series of circumstances. “As the title suggests, the album’s track sequence intentionally alternates between dark and light moods and themes…

“There’s a bit of an emotional rollercoaster ride.”

Check out the lyric video for “City Girl” below, and find out more about Chris via our mini-interview.

My name is Chris Ronald and I’m a Canadian Brit living in Vancouver. I emigrated to Canada almost 20 years ago. Singing, songwriting, and playing guitar has been in my life since age 15, but I only really started to go public with my music in my late thirties. I guess I’m one of those “emerging” artists that has actually been at it for 10 years or more. My emergence has coincided with being a father of three (now all teenagers) and supplementing my music income with a good deal of substitute teaching. Perhaps my music career would have developed quicker if I didn’t have other commitments to juggle but, thanks to a supportive wife and family, I’ve been able to chip away at it, and I’m proud of my accomplishments to date. These include a nomination for “Songwriter of the Year” at the Canadian Folk Music Awards, making the finals of the Kerrville New Folk contest, signing to Toronto’s Borealis Records, and international touring. I have five albums to my name with the fifth – entitled Light & Dark – to be released at the end of May.

Tell us about the recording process behind “City Girl”?

We – namely myself, John Ellis (producer), and Chris “The Wrist” Nordquist (drums) – laid the bed tracks for the album at Studio Downe Under in Abbotsford, BC, just before full lockdown in March 2020. In the months that followed, John fleshed out “City Girl” and the other tracks with his various instruments (guitar, bass, pedal steel, dobro, mandolin, keys, etc) at his studio in North Vancouver, MacArthur Park Productions. Later in 2020, adhering to COVID health and safety guidelines, I was able to lay down the vocals in North Van. “City Girl” was mixed by John and mastered by Sheldon Zaharko at Zed Productions, Vancouver. While the track was being completed, talented Vancouver illustrator scarlet wings kaili created the cool, manga-style lyric video now viewable on my YouTube channel – https://www.youtube.com/chrisronaldmusic

That’s a tough question. I was grateful restrictions lifted for the summer so the family could get away for a couple weeks and a change of scenery. And I don’t deny some positives came out of having to entertain ourselves more locally. The pandemic forced us to slow down and appreciate each other more as well as the simpler things in life. However, I think the family member with the most highlights for 2020 is our black lab who was in heaven with all the walks and attention.

Despite the pandemic and all the trouble it’s caused for touring musicians, I was determined to push ahead with the album as planned. Normally I’d have cross-Canada and international dates lined up, so I’ve had to find new and creative ways to reach my audience and grow my fanbase. Consequently, my online presence is stronger than ever with live streams, new website, lyric videos, etc. Hopefully, all my efforts will result in a successful release with lots of spins, some industry recognition, and the resumption of touring in the not-too-distant future.

Throughout my 10-year effort to get my music out there, I’ve been blessed with wonderful collaborations and stage shares. Meeting John Ellis in 2013 and having him produce my Timeline album has led to the development of my sound and a relationship with one of the best sidemen in the country. Further, being more ambitious with my recordings has led to working with some of the best musicians in BC and albums and live performances I will always be proud of. Along the way, I’ve had the pleasure of sharing stages with a multitude of artists both known and not, but none of it was really planned. I believe it’s what comes from aligning your stars and always striving to do your best work. That said, I’d happily open for Neil Young.