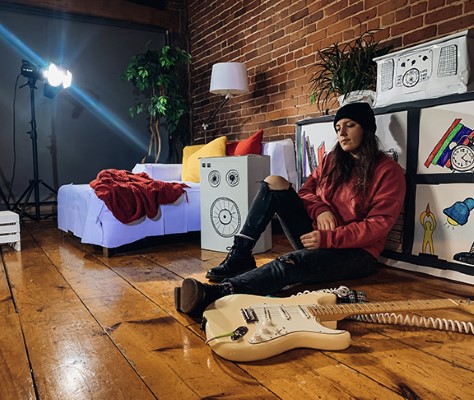 Landing ahead of the Montreal-based band’s forthcoming album, Fade In / Fade Out, the song features simple lyrics with a profound message; Spiegelman both implores you to listen, and also hear what she’s feeling, what she’s wishing, and what she’s needing.

Drawing on the nostalgia of 90s soundscapes — think Liz Phair asking Dolores O’Riordan to the dance, only to find out that Mazzy Starr was the opening band — “I Don’t Mind” lulls you into memories of heartbreak, but with an air of hope that you’ll survive this, too.

Having fronted several outfits over her tenure as a singer/songwriter, it was Spiegelman’s assembly of Let’s Be Giants where she found her niche. After recruiting Jeremie Dallaire on guitar, Matt Wozniak on bass, and Simon Pesant on drums, songs Spiegelman had started penning began to take a life form all their own.

“Esther often writes songs about being in her own head, and in her own world, where she can view things the way she wants to,” says the band. “As an introvert, she writes a lot about what goes on in her mind, and often references not wanting to go out into the real world.

“‘I Don’t Mind’ is the perfect example of that,” they continue. “It’s especially the ‘I don’t mind, change my mind’ lyrics that provide listeners with the possibility of change and hope.”

As a song that delves into the core of ‘human spirit,’ and challenges it to leave it all on the dance floor, the subsequent music video is another brainchild of Spiegelman where she found her creativity not only in song and on-screen but also behind the lens.

The ‘walk, sing, think, speak, cry, cringe, beg, plead, play it out, dance it out, figure it out’ nature of the video is immersive, and its cleverly drawn animated features keep audiences’ interest piqued. Hand-crafted by Spiegelman and her co-director, Dominic Levert, the pair had mere days to assemble the crayon drawings, storyboard the set, determine the appropriate shots, and see their concept through to translate to video.

Citing, and albeit jokingly, they recall never having “worked that much” in a three-day period, the effort pays off in fastidious ways. The detail in post-production with live and animated elements, mingling with the ingenuity of the whimsical indie-rock melody of the song, produces a snapshot in time — from losing it all, but clinging to the aspiration of winning one day again.

“The post production that came after the filming was even more time consuming than everything we had done so far,” the band explains. “Esther took the lead in post production, and literally learned how to animate to make this video possible. Because of the learning curve of it all, it ended up taking about 100 hours longer than anticipated.

“But she was determined,” they continue. “She got it looking how she originally envisioned it, bringing all her crayon-coloured illustrations to life frame by frame — of course, with the help of Dominic, who showed her the ropes and prepped mostly everything for post production.”

The results are a transcendent and brightly coloured visual for a contrastingly melancholy song.

Check it out below, and find out more about Let’s Be Giants via our mini-interview.

My name is Esther and I’m the singer-songwriter for Montreal’s Indie rock band Let’s Be Giants. I’ve been a songwriter most of my adult life and have taken many influences from the artists I used to listen to as a teenager alongside the artists that inspire me today.

I come from a background of music that is split down the middle of acoustic folk and 90s alternative rock which makes an interesting mix in my songwriting style for Let’s Be Giants.

I taught myself how to play the guitar when I was 17 and the songs started to just flow out of me. I started my career in music collaborating with mostly any musicians I came in contact with and formed a couple of short-lived bands through the early 2000s. Soon after I went solo for a while to try and find my sound and put out a couple of singles and EP’s under the name Esther S. I put myself through audio engineering school to better understand how sound works and to finally be able to record and mix my own projects. My first EP ‘Beneath the Blue’ with my current project Let’s Be Giants has been some of my proudest work in terms of songwriting and the production process. It has led me to produce and record our upcoming album Fade In Fade Out which will be my first full-length album since I began my career as an independent songwriter.

I have always been fascinated with sound and music and how it all comes together, as a multi-instrumentalist I would still say my strongest instrument is my voice and I’m always looking for new ways to push myself out of my comfort zone with my singing and songwriting.

I am super grateful for my band that allows me to get my songs up to their fullest potential and create something I can really get behind and share with the world.

Tell us about the recording process behind “I Don’t Mind”?

The song “I Don’t Mind” actually started as a 30-second soundtrack for a creative little video I made when I was home in quarantine and just really super bored and getting tired of working on the album. I found a few chords that I liked in a weird tuning that I can’t remember now and it started just as a lazy little verse that I had no intention of finishing. I soon forgot that I had written it and it kind of disappeared.

While I was finishing up the album I thought to myself that  I was missing a good cozy acoustic track and I was going through my projects on my computer and saw the verse I’d written and felt compelled to fully get back into the song. I actually couldn’t remember how I played it and the tuning I was in so I texted my guitarist Jeremy Dallaire and he came to the rescue as always. I told him I wanted to add it to the album and we got together in his home studio and the song fully came to life, his guitar parts just pushed it in the exact direction it needed to go and I fell in love with the song as we were working on it. We recorded his guitar parts the day he wrote them so we got that first draft magic while we were fully in the zone. At this point, all the drums for the album had already been recorded so me and my drummer Simon Pesant booked another session at my friend’s jam space and we pretty much hashed out the song then and there until we left with something that sounded perfect for the song. I was worried about separate drum sessions sounding different than the other songs of the album in post-production but Shae Brossard did some magic when he mixed the album and everything sounded cohesive and perfect. When the drums were done I sent it over to my bassist Matt Wozniak and he sent back exactly what I wanted to hear. It was a super fun process knowing that the album was done and we could focus on making one good song without the pressure of everything else. I loved the song so much I chose it for the first single. Most of the album was recorded with social distancing regulations and it was a much stranger and less convenient way of working than I was used to.

Figuring out parts on zoom meetings, sending audio back and forth, and trying to play music together on bad internet connections was definitely frustrating. Recording things separately wasn’t easy but it still made for a great album.

The highlight of 2020 despite not being able to rehearse or play shows with my band has to be completing our upcoming album. Although it was done mostly separately it was still a great learning and growing experience for me and it definitely pushed me past my limits. Getting to compile a few years worth of songs and having the time to be at home and put it all together was an upside of the craziness of the year.

Honestly, at this point in my adventure as a songwriter/musician, I just want to connect with the people that have an appreciation for the kind of music I’m writing. I’m not looking for an album of the year, a Grammy or to be number one on the charts. If that happens well..I’ll take it but I create music because it comes as an instinct to me and it’s how I express myself as a creative human living on this weird planet. I want to be able to connect with people through my music and make them feel an emotion, whatever emotion that may be. If I can move someone, just one person through my music it makes the struggle of being an artist in today’s competitive music industry all worth it. I hope that the album that I release this year finds its way to the ears that need to hear it. Our hopes as a band in 2021 were to be able to showcase our album live, get on the road for a tour, play a bunch of shows, and collaborate with some other great bands but we are all just waiting around to see what happens in the world so for now we will continue to write and record new music for the next months to come and keep it virtual for the time being.

It’s hard to say who I would choose to collab with if I could because I listen to so much music on the daily and if I had to choose just a couple I think it would take me so long to decide that I’d miss my shot.

But a few that come to mind first would be Wolf Alice, Soccer Mommy, Julien Baker, Jay Som, The Japanese House, Phoebe Bridgers,