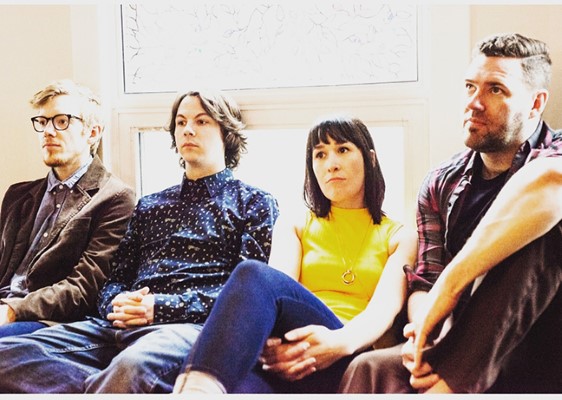 Saskatoon, SK-based four-piece rock band, The Great Fuss has released a video for their single, “Hairbrain”.

An homage to yesteryear’s pulsing piano melodies and indelible electric guitar riffs, the band goes for a generational collision, capturing a decidedly 60s vibe within a new-age kaleidoscope of rhythm and lyrics on the track.

On “Hairbrain,” the band explodes with chiding questions, including scathing sentiments like ‘You think you know what I’m after? I’ve seen your kind, it’s clear that you’re a disaster.’

Laced with low-fi pop-rock riffs that earworm their way into your consciousness, the track’s accompanying music video showcases the band interspersed with places of travel, dimly lit, brightly coloured, black and white, in and out of focus.

Check out the video for “Hairbrain” below, and find out more about The Great Fuss via our mini-interview.

Greetings, dear reader. I’m Pete from The Great Fuss. We’re a rock band from Saskatoon, Saskatchewan. We’re influenced by British Invasion bands from the 60s and also favour modern groups like Spoon, The Strokes, and Zeus.

Tell us about the recording process behind “Hairbrain”?

I have been amassing recording gear since around 2015. Since then I’ve been trying to hone my recording and mixing process. I think Hairbrain represents one of my best efforts to date. My basement is serving as our studio these days. My recording process uses a lot of analog tube preamplifiers to achieve a more vintage vibe. I also use a tube vocal mic modeled after a famous mic called a Neumann U47 (used extensively by The Beatles, and many others to this day).  I still record everything digitally, but I have a tape machine I can run elements through after they’re recorded. I also use a lot of groovy plugins that emulate vintage gear. Basically, I’m trying to take pretty sounds and f#*k them up a little bit (not too much, I hope).

For Hairbrain, it started with a seed that my daughter planted. She was sitting at the piano and showed me this neat, dissonant, rhythmic part she created (at age 10, no less). That was the inspiration for the intro part. I play a little bit of everything, so I created a demo and later got the “real” musicians in to play the parts well. I knew I wanted horns so I enlisted a couple of incredibly talented fellas (Brodie Moniker and Rory Lynch) to give it that brassy punch. I had them listen to some Ornette Coleman before recording the chaotic ending part for a sense of what kind of vibe I wanted to cultivate. They knocked it out of the park.

Typically as a band, we spend our weekends gigging. That didn’t happen last year due to the dreaded ‘VID. The good thing about that is I could hunker down in the studio and actually finish an album and a half worth of material. Stripping away the gigs has contributed to a greater focus on the recorded material and having the “means of production” allowed me to bring my ideas to fruition.

It might sound like hokey rubbish, but we really just want to bring enjoyment to as many people as possible with our music, so expanding our audience is one of our goals.  Toward that end, I also see it as vital to continue developing my skills as a singer-songwriter and mix engineer so that we’re giving people the best possible listening experience.  My secret goal (don’t tell anybody) would be to position ourselves this year so that once we all get our needle pricks we can have a summer full of awesome festival gigs followed by a fall of European club dates in 2022.

Oh, lots! Playing a show with Spoon would be a dream come true (I’m not holding my breath). I’d also really like to work with some of the renowned mix engineers to develop in the production craft. Working with Joe Chiccarelli would be a dream.