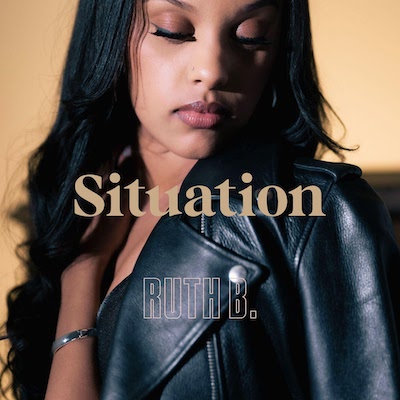 Earlier this week, 25-year-old Ethiopian-Canadian singer and songwriter Ruth B. announced her new album “Moments In Between”, to be released June 11 via Downtown Records. Executive produced by Patrick Wimberly (Beyonce, Solange, Blood Orange, Ellie Goulding), the album features eleven new, original songs all written or co-written by Ruth.  Following her gold-certified 2017 debut Safe Haven and multi-platinum hit single “Lost Boy,” Moments In Between is a raw emotional accounting of the anxieties and uncertainty Ruth faces as a woman in her mid-twenties, giving voice to her inner strife via warm vocals, shapeshifting textures, and hazy harmonies. You can pre-order “Moments in Between” here.

To accompany the announcement of Moments In Between, Ruth B. has unveiled a new single and video for standout track “Situation.” In the video, directed by Annie Bercy (Ciara, OSHUN), the cool remove from which Ruth sings “What’s the Situation?” is belied by private frustration and uncertainty as she tears pages from a diary, hangs on the phone, and jumps up and down on her bed. “‘Situation’ is maybe my favourite song I’ve ever written,” says Ruth, who wrote the track with Ido Zmishlany (Demi Lovato, Shawn Mendes). “It sounds so much like me, and where I am now versus a few years ago.”

From woozy R&B and pop beats to guitar-driven tracks and folk-like reveries, the songs on Moments In Between showcase Ruth B.’s ability to seamlessly traverse a multitude of musical stylings, and will surely add to her 1.5 billion artist streams to date. Ruth B. credits her songwriting and storytelling abilities to her upbringing as the daughter of Ethiopian immigrants, listening to the music of her parents’ homeland alongside American icons like Stevie Wonder and Lauryn Hill. For this project, Ruth also worked with producers Justin Raisen (Angel Olsen, Santigold) and Doug Schadt (Maggie Rogers, Ashe) who encouraged her to dig deeper in the writing and recording process than she ever has before.

The announcement of Moments In Between follows the February release of a powerfully reimagined version of Ruth’s single “If I Have A Son” featuring The Harlem Gospel Travelers. Ruth first released the track – a chilling lament on the dangers Black children face because of their identity – in June of 2020, shortly after the murder of George Floyd. Ruth performed the new arrangement on The Kelly Clarkson Show, with Kelly herself describing the song as  “honest, thought-provoking and downright beautiful.”