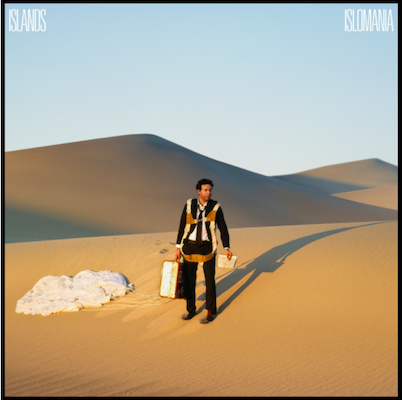 Last month, Islands returned from retirement with a bang with the announce of their first new album in 5 years, Islomania (out June 11th on Royal Mountain Records), and shared the single “(We Like To) Do It With The Lights On.” The track ignited immediate excitement from the press, with Rolling Stone describing the track as “a catchy bit of dance-pop led by an irrepressible bass line and a vocal performance from Nick Thorburn that flits between blasé, charming, and exuberant” and Consequence calling it “a sleek and colorful club cut [that’s] a hell of a lot of fun,” alongside praise from outlets like Pitchfork, Stereogum, and BrooklynVegan. Today, Islands are sharing a second single from the album “Set The Fairlight.”

A shining example of Nick Thorburn‘s penchant for bright, expertly crafted pop songs that hint at something darker behind their hooks, “Set The Fairlight” sees him teaming up with producer Chris Coady (Beach House, Yeah Yeah Yeahs) for a track that sees him grappling with uncertainty.

“This was the last song made for the album, written and recorded during the pandemic. I suppose it’s vaguely about the feeling of anxiety and fear brought on by COVID. There’s separation (by a cemetery wall – grim!), isolation and the desire to reach out and touch someone. None of these themes were calculated or laboured over, though. Like most of my songwriting, I kind of let the subconscious take the wheel. I find I get to more interesting places when I’m not trying to steer the metaphors.“

Five years after Islands went dormant, Nick Thorburn resurrected the band, who reemerge this year with their 8th album, Islomania. More than two years in the making, Islomania is a culmination of things Thorburn learned from the intervening period and all the things he’d accomplished during the band’s initial ten year run.

Over the course of ten groove-heavy songs, Islomania flits from the ridiculous to the sublime. On the surface, these songs are all blissful hedonism, tracing the reckless abandon of a progressively wild Friday night. But pick at the scab and there’s a darkness. Themes of futility and repetition (“Closed Captioning”), a yearning for transcendence (“Natural Law Party”), a need for understanding (“A Passionate Age”) and a deep desire for vulnerability and intimacy (“We Like to Do it With the Lights On”) thread the album. “Tension and release exist throughout. Every song here begins bottled up, but there’s always a cathartic release by the end. There’s darkness and doubt in every crevice of this record, but there’s always a release,” Thorburn says.

Islomania will be released on June 11th, 2021 via Royal Mountain Records.You can pre-order it here.