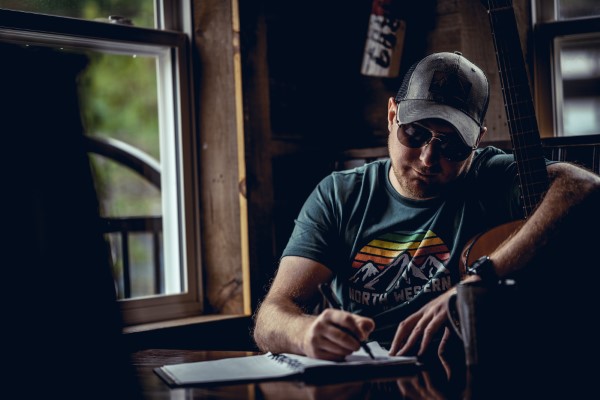 Newfoundland-based artist, Justin Fancy is back with a brand new video for his single, “Makes Me Wanna”.

Check out the video below, and find out more about Justin via our Five Questions With segment, including how he shot the video adhering to COVID-19 protocols.

Hi Justin! For those who are not familiar with your music, can you tell us a little about yourself?

Sure! I’m a country recording artist from Conception Bay South, Newfoundland, about as far east as you can go! I released my debut album in September 2020 called “Sure Beats A Good Thing”, which was also the first single from the album. Prior to that, I released two stand-alone singles called “Long Time Comin’” and “Think About You”. The success I had with those two songs confirmed to myself that I was on the right track and inspired me to record the album.

On the personal side of things, I am an avid boater and love to play golf. Snowmobiling and songwriting are a big part of my winter hobbies. I have an 8-year-old daughter, Kayleigh, who is my world. She appeared in my first video for “Long Time Comin’”.

Please tell us about your new single, “Makes Me Wanna”.

“Makes Me Wanna” is the second single to be released from “Sure Beats A Good Time”. This song is about the struggles of trying to force yourself to get over someone while ignoring the process and time it takes to heal and move on. It’s about realizing that we’re in charge of our own destinies, but we must trust in the process without attempting to force anything.

You were not able to shoot the video for “Makes Me Wanna” as planned because of the Covid lockdown in Newfoundland. Can you tell us how you ended up making the video?

We originally planned a whole different concept but when Newfoundland was hit with a pretty big covid outbreak we had to come up with Plan B. Samantha Picco (from Big Brother Canada Season 7), who had appeared as my love interest in the videos for “Think About You” and “Sure Beats A Good Time” was supposed to be a major part of the video, so I spoke with Stephen and Brad at Centre City Media (who have been the masterminds behind every one of my videos so far ) and we came up with the idea of using “flashback footage” from the previous videos to create her scenes. Then my friend Geoff Hynes was gracious enough to offer his time to shoot my parts in the studio where I recorded all of my vocals for the album. Once we finished the shoot, we sent the footage back to CCM, and they edited the video. I would have liked to have gone with Plan A, but to be honest I’m very happy with the results!

For me, it was easier to be creative during the pandemic, minus the anxiety and the unknowns that we were all feeling when it first hit us. I was home every day, with my guitar right next to me, so it was easier than hectic everyday life. I had to be innovative when it came to doing shows so I bought a bunch of gear to enable things like FB and Instagram Live performances. Technology and social media were an important piece of the puzzle for artists before, but now they are absolutely crucial. I’m an IT guy, so the transition to the online world was easier to me than most, but I still had to learn a lot along the way. I think we will be relying more and more on technology moving forward.

So many great artists to choose from! I’ll stick with Newfoundland artists since you don’t hear about them too often. I really dig what Alan Doyle is doing as a solo artist, and I have to give a shout-out to a great rock band from St. John’s called Fairgale.