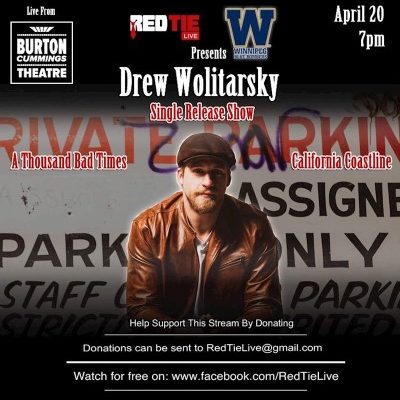 Drew William, also known by the world by his full name, Drew Wolitarsky in CFL Football, has recently released his Room EP, and has been itching to play live shows again. Since that may not be a reality for a while, he’s jumping on the next best thing with his FREE Live Stream show on April 20, 2021, at 7:00 pm, at Winnipeg’s Burton Cummings Theatre. The show is presented by Red Tie Productions and the Winnipeg Blue Bombers.

Be sure to check out the Live Stream link HERE.

Drew will be playing songs from his latest EP as well as two new ones, “CA Coastline”, and an acoustic-folk rendition of Post Malone’s “A Thousand Bad Times”.

Both songs were created after Drew reflected on his drive from California to Winnipeg.

“Coming off of a hard breakup, the loss of my job, and the death of my grandfather, I was feeling an extreme amount of loss … I remember one of Post Malone’s lines really hit me.
‘I’ve had a thousand bad times, so what’s another time to me? You tried to burn my house down, but what’s another house to me?’ It has this hyperbolic wit to it, but at the same time, that’s what these losses feel like—house fires.”

Drew makes the cover his own, playing the recurrent hip-hop melody on his acoustic guitar and harmonizing with his powerful voice.

“CA Coastline” is also about loss but more so about shrugging off the negative emotions that come from some memories.

Using this coastline as a symbol of memory and time, the way it stretches and bends and there are pockets when you can see the future and the past and then disappear back into the valleys; the waves coming and going, infinitely, and we are just specs to the grander scheme of love. So this song is about letting go peacefully, throwing a bottle out to sea with the memory of a lost love, but knowing more is being pushed at this very moment, from the deep blue depths all things reach the coast eventually.”

Check out Drew’s Room EP below, and be sure to check out the live stream on April 20, you won’t regret it.