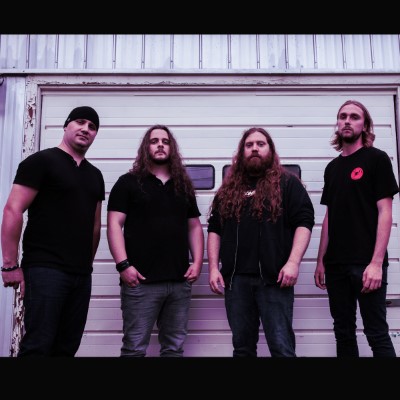 Quebec City-based rock band, Sandveiss is fighting back at the Pandemic, which sabotaged many of our plans. Now they are introducing their new “home video” which features their latest album, Saboteur played live in its entirety. Presented by DOZE, watch Sandveiss: Sabotaged Live on April 21, 2021, at 7 pm (EDT). Get your tickets HERE.

While you’re waiting for the big event, why not find out more about the band via our Five Questions With segment below, and check out their album.

We are a 4-piece heavy rock band from Quebec City, we have been active since 2011. During this time, we have recorded 2 full-length albums and 2 EP’s.

Our music is influenced by the music we grew up on. 90’s rock, 80’s metal and 70’s classic and prog rock. Regarding our writing style, it is riff-oriented music but with a strong emphasis on melody. We love groovy and heavy riffs which can be heard a lot in Stoner and 70’s rock.

Because of the pandemic, it’s hard to practice and jam, but we still share ideas and songs to work on so we can keep the creative sparks lit. We are in the process of writing the next album. Otherwise, we still found the time to record and release an EP called, Sandveiss Bloody Sandveiss, A Tribute to Black Sabbath. Two songs were recorded live in the studio and two were acoustic renditions, recorded in our home studios.

And most recently, we had the opportunity to record a live session of Saboteur, our last album. It was filmed with an artistic flavor, it will be presented as a kind of an old-school home video. It will premiere on April 21st, tickets are available right now on Thepointofsale.com

The Masquerade, it’s a longer song, but it reflects all the facets of our musical personality.