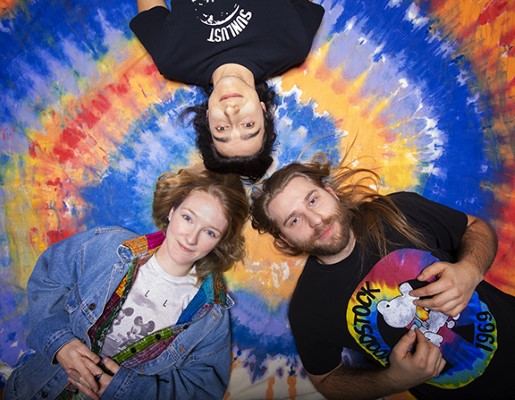 From front to back, “Action Figure” has more than enough oomph to shake even the most rigid of beings from their resolute poses with its frisky riffs and upbeat rhythm. As if that weren’t enough to get heads boppin’, the single kicks it up a few more notches during the bridge and chorus with its crunchy chords and guitarist-frontwoman, Stephanie Woulfe’s fun and raspy vocals.

“It was written about small bedroom daydreams of robot action figures in the grass, blowing in the summer breeze, and dreaming of floating away to easier days,” Woulfe shares of inspirations that stemmed from dreams and ambitions too big for her previous small town to contain; the founder of Sunlust hails from a remote locale in Ontario, where she was left to her imagination to stave off loneliness, boredom, and frustration. From there, the vision for Sunlust and its single were eventually actualized in the big city of Toronto, Ontario.

“Action Figure” is part of a collection of songs written from her adolescent experiences growing up in said small town. Initially intended to be a five-song EP, Woulfe and fellow bandmates Dan Wiktor (on drums) and Stefano Signorile (on bass) decided to incorporate those songs into a 10-song soon-to-be-released debut LP, Geek Confessions due to the pandemic.

Check out “Action Figure” below, and find out more about Sunlust via our mini-interview.

Dan – “Hey Canadian Beats readers – we are Sunlust. Our band is a rock trio, we formed in 2018 and are based in Toronto. We have recorded and finished our debut LP called “Geek Confessions”. It’s a 10-track release that we’ve started and finished over the last year. Our band consists of Stephanie Woulfe on vocals and guitar, Stefano Signorile on bass, and me, Dan Wiktor on the drums.”

Steph – “I spent my high school years obsessing over music and bands, and learning tons of covers to teach myself guitar. Shortly after high school I started writing songs and recording my own demos. Growing up in a very small town, I decided to move to Toronto with hopes of having all my rock n roll dreams come true. I have been lucky enough to find Dan and Stef, and to experience playing shows, recording, releasing music, and finding a group of true friends among the music community.”

Stefano – “Growing up in Vaughan, aka “the city above Toronto”, being a rock n roller was an anomaly. I was the only guy in my high school with long hair, and one of the only kids in my neighbourhood that had a garage band. I met Dan early on in my days at York University and stuck with him all the way through because he’s a really great friend whom I also share many interests with. In the spring of 2018, Dan had met Steph and sent me some of her demos that she shared with him. One of them was “Action Figure” – I had such a special feeling about that song (and the other demos) I went out and bought a Fender P-Bass and an amp. I wanted to play bass in this band because I knew we could make something special. With many live shows under our belts and our first LP on the way, I think I made the right choice.”

Dan – “Listening to music and digesting music knowledge has been a part of me for a long time. Anyone remember the amount of good programming on Much and Much More Music? That was where I got exposed to it all – seeing top lists of best albums of all time, daily top music videos, band interviews etc. It started as an interest and it led into playing drums later in high-school. From then onwards it’s been steady jamming, practicing, and playing shows with friends – it’s definitely one of the joys in my life.”

Tell us about the recording process behind “Action Figure”?

Dan – “Action Figure was recorded in the winter of 2019 with Lorne Hounsell. We met Lorne through our numerous shows at The Piston. He would do the sound there and he became familiar with us and our songs so he offered to record us. We soon found out that Lorne recorded many Canadian bands throughout his career – Fucked Up, Bedioun Soundclash, Cuff the Duke.. at that point we were convinced that we were in good hands.”

Stefano – “The sessions started with us recording drums at The Piston. After that we did the guitars and vox at Pineship Sound – where Lorne works as an Engineer, Mixer, and Producer. We added some more textures to the song at home and Lorne did an awesome job with bringing it all together for us. We’re very happy with all the work that Lorne did for the Side A of our LP. Thanks Lorne!!”

Steph – “For me it was probably recording the second half of the album in early fall at Cadence House. It was really fun and enlightening to work with Dan’s brother Jack; he has a great ear and is an excellent producer. He always seems to know just what a song needs and what it doesn’t. And he’s always down for a good time.”

Dan – “Ya to add to Stephanie, I think we grew more as musicians as we recorded Side B of the LP with my brother Jack. It was really a highlight of 2020 as we were in a cozy and familiar situation by recording at Cadence House. It really enabled us to craft the songs and give them the time they needed. It was awesome to record another 5 songs and push forward with an LP (something we’ve set our eyes on since the beginning of the band)”

Stefano – “For me it was the release of our first single “Orange” in the fall. To finally officiate everything via Spotify release (and other streaming platforms) and seeing loads of positive feedback come in, it felt great that things were finally starting to come together after such a dreadful year.”

Steph – “If things start opening up, going on tour, even across Canada, would be amazing. I have been collecting some wild thrift store jackets and I’d love to be able to wear them on stage.”

Stefano – “A million hits on Spotify! Also, it’d just be really nice to have some beers with friends and fans after a show – I think that’s a more modest place to start.”

Dan – “I’m looking forward to continuing making more visual content for bands. I’ve had the opportunity to make music videos with Sunlust, Roy, Queens and Kings, and Joe Cool – I’d like to continue my craft of being a director, producer, shooter, and general helper in making awesome videos.”

Steph – “There’s so many sick bands playing music right now. Bully, Skating Polly, FIDLAR, and Charly Bliss are a few that come to mind for me that I’d love to play a show with. I’d love to play with my brother’s band the Stay at Home Dads again too, they’re from Windsor but I’d love to have them up to Toronto for a big ole partay.”

Dan – “Toronto is really blossoming with so many awesome rock bands – it’d be a pleasure to play with bands like Frankie the Pig, Possum, Roach, Cleopatrick, and Ready the Prince to name a few… Keeping our fingers crossed that we will be able to play shows soon!”

Stefano – “It’d be really sweet to open for FIDLAR or Cleopatrick. They are two of my favourite bands right now. As per a collaboration, my friends from the band Sofiacide come to mind.”