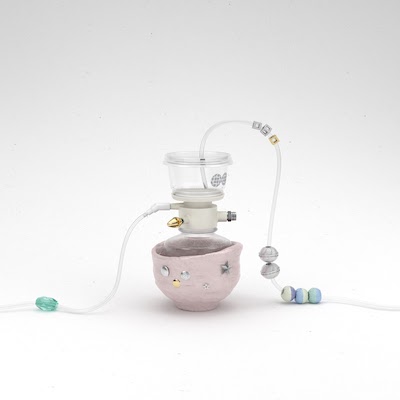 Over just eight days in the studio in 2018, experimental singer-songwriter Helena Deland and multi-instrumentalist and producer Ouri (Ourielle Auvé) discovered an innate creative connection, building and bouncing ideas off of one another, developing an intuitive approach to composition and sound. The resulting self-titled album, Hildegard is wholly its own. Out on June 4, 2021  as their debut release on Chivi Chivi, today Deland and Ouri have also shared the propulsive and thrilling opening track, “Jour 1”, with an accompanying music video. The duo describes “Jour 1” as being “about processing by partying, and the clarity that sometimes comes with it.”

The eight tracks on Hildegard fuse together into a sonic sphere, and are named for each day Deland and Ouri spent together. Deland’s folk background balances against Ouri’s nocturnal world of electronic and dance music. Two figures find space to meet, somewhere between light and dark, liquid and solid, heaven and earth. They weave in and out of each other. Weightless vocals and aphoristic lyrics hover over kinetic beats and throbbing bass. The meeting place sounds something like dusk, or dawn.

From this alchemy arises the figure of mystic, healer, composer, and visionary 12th century nun, Hildegard of Bingen, from whom Deland and Ouri drew inspiration. Hildegard was a woman of science, music, and spirituality, as well as a symbol of nurturing strength. In her 12th century presence, she wrote prophecies, poems, and treatises; she experienced otherworldly visions and recorded them, passing them down through generations. Deland and Ouri invoke Hildegard as a carrier of the magic they felt working with each other, the separate entity that was born as they blended together. Artist Melissa Matos developed a visual language for the project that reflects this melding and switching of identities, imagining Hildegard as both a contemporary and historic presence. A tangling of two identities beyond the possibility of retreat.

Hildegard is a testament to the intensity of coming together, losing yourself in one another, emerging as something new. Throughout the album, the boundaries between self and other are thin as light. Call and response grow into a third element: the sound of a fantasy, a nightmare. Or maybe even a vision.​ You can pre-order Hildegard here​.