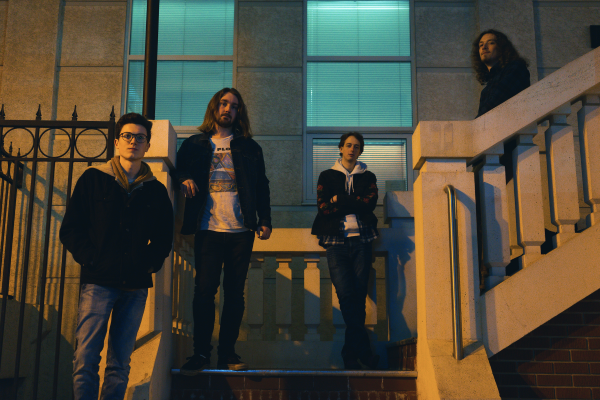 Edmonton, AB-based rock band Vela Rosa have released their first single, “Right in Front of Me” from their upcoming debut album, Run In Colour.

The four members of the band Wyatt Clark (lead vocals/guitar), Chandler Pope (drums/backing vocals), Josh Bragg (rhythm guitar/backing vocals), and Ben Nickerson (bass/backing vocals), have come together to create the new wave of rock that pays homage to the greats like The Rolling Stones and Jimi Hendrix. Vela Rosa quickly found its creative process, opting for a classic “jam it out” approach where each member contributes his part to any song.

“Right In Front Of Me” uses a 70’s inspired rock instrumentation as the background for lyrics about the struggle of being a rock band in modern times. The song tackles an issue that many musicians are going through, which is the struggle of deciding whether to make music that they like or music that will make them money. With its upbeat feel and fantastic musicianship, Vela Rosa knocked it out of the park with their first single.

“Right in Front of Me” is a reflection of the co-existing feelings of unease, anticipation, and optimism that life in early adulthood brings. Though our lives both in and out of Vela Rosa have given us many great and irreplaceable memories and experiences, we all, at one point or another, find ourselves fighting against our own feelings of fear and self-doubt. The difficult process of recording “Right in Front Of Me” serves as a sort of isolated metaphor for the song’s lyrical content, and one whos impact we feel contributes well to the final product. Failed attempts, uncertainty and difficulty to push through were present in not only the song’s inspiration, but the recording of it as well.”

Check out “Right in Front of Me” below and stay up to date with the band via their Instagram.

Vela Rosa · Right In Front Of Me