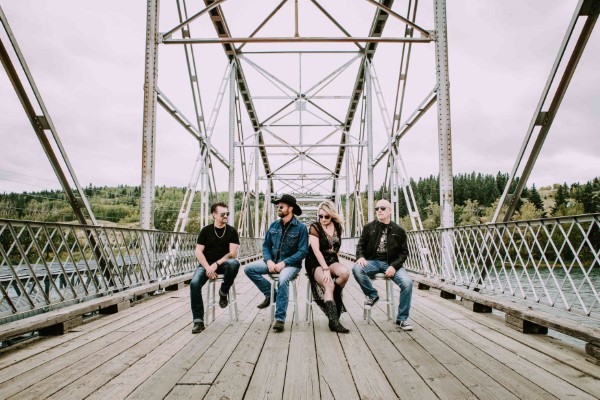 Describing themselves as “Real. Raw. Renegade” is definitely accurate for Alberta’s Renegade Station with heaps of musical mastery tacked on! Despite the challenge of distance over the past year, the quartet still managed to write, record, and release new music, including their most recent single “Free, Free, Free”.

Your single, “Free, Free, Free”, really allows the listener to sit back, relax and just take a much-needed breath. Besides the state of the world over the past year, were there any personal instances that inspired the messages in the song?

The message in “Free, Free, Free” isn’t a new one; I think we’ve all been guilty of taking the little things in life for granted. We all focus on the “big” things (jobs, cars, houses, prestige, etc…) and lose perspective about what’s actually important.  Security, love, respect, and friendship are every bit as needed. The beautiful thing about this song is the simple and eloquent way that the sentiment is expressed; it says it, without having to spell it out.

What would you say has been the biggest struggle for you as a group overall being hunkered down from doing a lot of what you know best (being out on the road, etc.)?

We’ve always been proud of our chemistry as a group and how we perform live. In fact, we all live within about 5 minutes of each other and when we started playing music, it was just to play music. Sometimes, we have a practice just to jam and have a few drinks. So to be that close, yet so far away from each other was quite maddening.

However, because we’ve been so used to using tech and streaming platforms for social media, songwriting, and pre-production that when we were finally able to get together face-to-face, we were well rehearsed and able to transition to our live music mode. It always makes our vocals and harmonies much more genuine and true-to-life.

It must have been such an amazing feeling to be honoured by the Association of Country Music a few years ago (Group of the Year x2 and Fan’s Choice of the Year!) Of all music awards (Country or otherwise) available, what would be the biggest honour for you to receive?

Winning awards, especially ones that are awarded by your peers, is a special feeling. When we won Country Music Alberta’s Group of the Year and Fans Choice in the same year (2015), we were on top of the world. The next year we also won Group of the Year, and a few years later, when we won the inaugural Single of the Year award for ‘Who’s Gonna Love Me Tonight’. We could not have been more honored! To be recognized at the national level for our group efforts would be really terrific. Every Canadian country band dreams of eventually winning the CCMA for Group of the Year and we’re no different.

What started as a backing band at a variety of events turned into a full-on star of the show(s)! Was there a particular moment that you looked at each other and said “let’s DO this”?

We had actually completed our backing-band show for the year; an annual charity show in our town of Stettler, where we learned about 40 new songs/arrangements each year. The event had been finished for a month or so, but we’d still gotten together to have a few jam sessions and the occasional beverage.

Kent was approached by a local group to put a group together to play a Rodeo Dance. When we had finished the gig and tearing down, we looked at each other and said “what’s gonna be the next one?” Since then, we’ve never looked back!

Unfortunately, that depends a lot on the regulations regarding live music and traveling. Most of our live gigs are up in the air as far as confirmation.

Regardless, we will support “Free, Free, Free” to the best of our ability with virtual shows, drive-in shows, and, hopefully, a full-blown tour and live performances. We also are continually working on new music and projects, so it wouldn’t be unlikely to have another Renegade Station song hit the market later in the year.

However, when you have a craving for live performances like we do, you’ll use any means necessary to make it happen. We hope to see you all out on the road this summer!!!