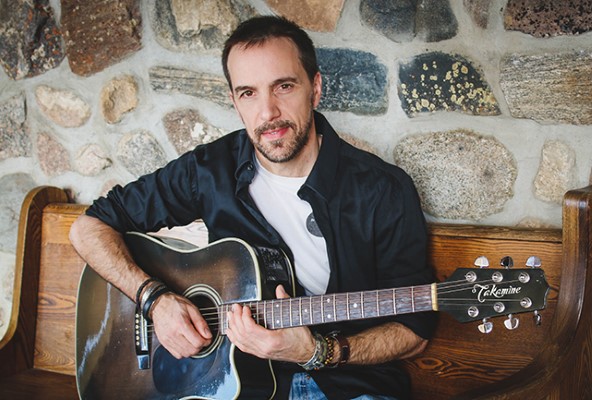 A multi-releasing and acclaimed singer/songwriter, this is Ehman’s (pronounced ēmn, with a hard ‘e’) first official cover offering, and lands a month after his not one, but two 2021 Saskatchewan Country Music Award nominations were announced: Male Artist of the Year, and Songwriter of the Year.

“‘Hungry Heart’ has been one of my favourite Springsteen songs, right from its original release in 1980, even before I knew it was The Boss singing it,” Ehman shares. “It’s such a classic. It’s simple, yet complex… Happy, yet sad at the same time… Thoughtful, yet spontaneous.

“I think we can all relate to that after 2020,” Ehman adds, “and who doesn’t need more heart in these socially distant days?! When I would play it live, it always got the crowd going and having fun, and we could all use more of that right now.

“This is a song to fall in love with all over again.”

Teeming with his resonant heart-felt vocals, plus his own tweaks to the track, Ehman’s “Hungry Heart” was produced by Brad Prosko of Regina’s B-Rad Studio. Drummer Jayson Brinkworth, bassist Shane Hendrickson (Aaron Pritchett), and keyboardist Mike Little (George Canyon) round out the track’s contributions.

Check out “Hungry Heart” below, and find out more about Ehman via our mini-interivew.

I was born and raised in Saskatchewan and have always stayed faithful to my rural roots in my music and in my life. I live with my family on a fifth-generation farm at Craik in a “catalogue” house built by my great-grandpa more than 100 years ago. I have a degenerative eye condition called Retinitis Pigmentosa (RP for short), which forced me to take a step back from the day-to-day farming operation of which my son has now taken over, but it hasn’t deterred me from writing songs, performing live, and pursuing my musical passion with the same commitment and drive as I had in my younger days, when I toured Western Canada with my bands Midnight Highway and Idle Rains.

To date I’ve released six studio albums, had multiple radio singles that cracked the top 100 country music charts in Canada, several Saskatchewan Country Music Award nominations, (including 2 more this year) a long, long list of live performances that include opening for Doc Walker and Michelle Wright, among others, headlining the “Country at the Creek” music festival and eight years as a full-time touring musician.

2021 was a trying year for everyone, but for a songwriter, it did allow for “A LOT” of extra time for songwriting which I took full advantage of, and have plenty of new music to be recorded in the coming months, so please stay tuned!

Why Springsteen and “Hungry Heart,” you ask?

Well, my first thought is hey, “Why Not”!! (haha) For starters, it’s simply a great song, just about everyone has heard it and sang along to it at one point or another, I’ve sung it in my live shows on and off over the years and it always goes over great and…I LOVE THE SONG!

I’ve never recorded a cover song before and just thought it would be fun to try and see what we could do. Bruce Springsteen has definitely been one of my musical influences since I first discovered his music when “Born in the USA” was released in 1984. His songs and his writing display such depth in passion and heart that it’s easy to be drawn in and become a part of the song. It’s a talent that all of us songwriters strive to achieve and that has helped to drive me to write the very best songs that I can. Maybe someday “The Boss” and I could write a song together. Now wouldn’t that be COOL!!

Tell us about the recording process behind “Hungry Heart”?

The song was produced by Brad Prosko of Regina’s B-Rad Studios, but it isn’t our first collaboration. In 2008, Brad produced my fourth studio album “Wheels of Life,” which featured the legendary bass guitarist Garry Tallent of Springsteen’s E-Street Band laying down all the bass tracks for the record. Brad and I met with Garry to record his bass parts at his home studio in Montana in the spring of ’08. Garry was so open and hospitable and treated us as equals in the music field even though his list of accolades is much longer and more distinguished than ours. And of course, his contribution to the album was immense and it’s an experience we’ll cherish forever.

Fast forward, and no one is traveling very far for full studio sessions, given pandemic restrictions, but that hasn’t stopped the recording process or the collaborations. When I decided to record Hungry Heart, I asked Brad to be part of the project. We brought in drummer Jayson Brinkworth & bassist Shane Hendrickson (Aaron Pritchett) and keyboardist Mike Little (George Canyon), each recording their instruments at home (in Regina for Jayson, Shane in Vancouver, Mike in Calgary, and Brad in Strasbourg). Just one face-to-face session with Brad and I in the studio to record the lead vocals and the mix was complete. Then Brad worked his mixing magic and we had a really cool new song!

What a year 2020 was, something most of us have never experienced before. (and don’t want to again either) From the position of a family man, I’m definitely most thankful that my family has remained safe and healthy throughout the year. That is what is most important, of course.

From a musical standpoint, 2020 was a trying year, no doubt. Most of our live shows were canceled and we only performed a handful of acoustic shows. But I can “always” find a silver lining in difficult times cause that’s what keeps me grounded and moving forward. So I’m going to highlight a Facebook Live show that I did with the CNIB during the Saskatchewan lock-down. It was broadcast throughout Canada on the many CNIB affiliate Facebook pages and we had well over 100 online for the show and upwards of 1200 views of the video after the show. Following the event, the National President and CEO of the CNIB, John Rafferty, personally called me to say thank you for doing the show and participating in the series. I’ve had the pleasure of meeting John and he is a special person so this was just the icing on the cake for me.

It is always a real honor to work with the CNIB to help raise money and awareness for the blind and visually impaired.

Around here we are “Really” hoping that things return to as close to normal as possible this year. It might take a while for live shows to resume but when they do I’ll be “chomping at the bit” to get back on stage with the full band and in front of an excited, enthusiastic crowd. I have a few songs that we are in the process of recording as we speak so there will be new music coming out later in the year following the release of Hungry Heart.

One single release, one radio spin, one interview, one live show, one new fan, one new song written…one step at a time. That’s all we can do and that’s what will keep me excited about 2021!

Who wouldn’t want to open for Springsteen?!? But he doesn’t do that so we’ll move on…

For most of my younger years, I would have said opening for Waylon or Willie was at the top of the list. But Waylon is sadly gone but there may still be hope to open for Willie.

I’ve seen John Mellencamp live a number of times. It would be INCREDIBLE to open a show for him. John is an icon in my books, and probably yours too, so opening for him would be priceless. What if he told me that he enjoyed my set?! Whoa, that’d be ridiculously cool!

One more…Steve Earle. I would love to write with Steve. He’s been an incredible songwriter and performer for so many years, another icon for sure. And after the writing session, we could do an acoustic set at the Bluebird Cafe in Nashville, TN to a sold-out house. Hey, why not shoot for the moon. It never hurts to ask, ya never know what they might say!!