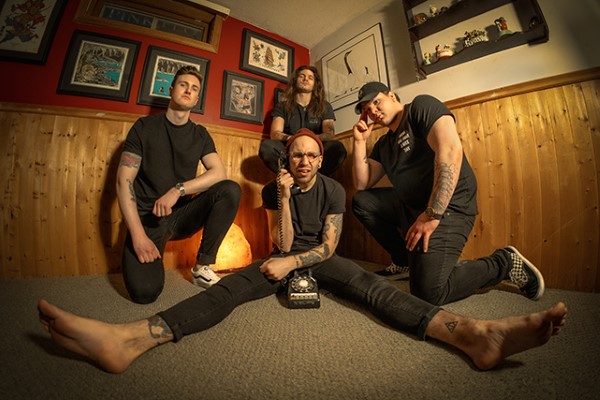 The song’s inspiration stems from a subliminal vision band member Josh Gaudette had where his dad was dying, the band — which also includes Josh’s brothers Joseph and Jack, as well as Shawn MacDonald — shares.

“Essentially, he was giving me his last words, and pieces of advice to take with me into the future,” Josh continues. “But with my dad still being alive and well, it was even weirder for me being at his bedside as he was ailing within the dream. Even more disturbing was receiving the call that he was gone…

“In the dream, it all seemed so real,” he adds. “It made me feel super creeped out, and the whole experience of writing the song had this super creepy vibe to it, as well. I think that comes through in the track.”

“We originally had more of a cinematic storyline planned for this video, but Covid had other plans,” Shawn reveals; he also directed the flick.

But they made-do, deciding “to make the best out of a less-than-ideal situation,” Joseph adds, “and used our resources to the fullest.”

“The whole video was shot in our home — the Underground,” Jack picks up, name checking the band’s title and ethos all in one. “And it helps to have a drummer that doubles as a director!”

Check out the video for “6 Feet” below, and find out more about the band via our mini-interview.

We are Moore Ave Underground from Aylmer, ON Canada!

Tell us about the recording process behind “6 Feet”?

Josh: 6 Feet was actually a really fun tune to record. We recorded it back in January of 2020. We had driven out to Beach Road (In Goderich, ON) to lay down the bed tracks and then had to head back out to London to play a show with Ridgeway, Yeah Bud, & Somehow Hollow.

Joe: After the show, Josh actually lost his voice and couldn’t record any vocals for the rest of the weekend. He did try to do some gangs but it was just too funny watching him struggle to make any noise haha!

Jack: While we were finishing up the tracks there was this insane ice storm; like we woke up to what seemed like the entire world coated in ice. It was pretty insane!

Shawn: And that wasn’t even the craziest part. That morning we also all woke up to that amber alert about the nuclear plant that was compromised or something. We were so unsure of what the day was gonna hold haha.

Josh: Yeah I’m pretty sure we have a video somewhere of Sig (Siegfried Meier, the man behind the recording and production of the single) standing on a bench in the middle of the storm begging for the world to take him, or something crazy like that haha!

Joe: Yeah, so we made the best of the weekend and had a blast recording the tune, Josh ended up going back in February to record his vocal tracks. Little did we know that was gonna be one of the last weekends we would have like that before the entire world shut down!

Jack: 2020 was definitely a tough year for everyone. We all had so much planned and barely even got to accomplish a fraction of it. But I think my highlight was the one show we did get to play. Once restrictions started to lift a little in the fall we were asked to play a 2 hour set at Palasad Socialbowl in London, ON.

Joe: Yeah that was a rad night. We had the maximum capacity filled for the venue. And everyone was just having a blast. Their stage is super cool too, it’s extended above a few lanes of their bowling alley. It was all incredibly safe and well thought out. We were super lucky.

Josh: Man that was a great night, I’d have to agree. We had two 45 minutes sets planned out nicely with a goofy wardrobe change in the middle. We got to try out a couple new tunes and they went over really well!

Shawn: Don’t forget the parking lot incident! Jack and I were having a good ‘ole fashioned Wrasslin’ match out by the van after we packed up. We were feeding chops back and forth, next thing I know…BAM…Jack throws me into the ‘ropes’ so I had to counter with a Sweet Chin Music of course.

Josh: AHAH then I had to come running over because the police were pulling up on you guys. Try explain that to the cops! “Yeah sorry officer, my friends here are just having a wrestling match….yes like WWE….yes sir, we are just excited to have played a show…yes sir, we will get home safe…” HAHA!

Josh: 2021 is definitely full of hopes, but I think I speak for everyone in the band when I say that this year we’d really like to get in the studio and start working on our first full length record. I’ve got a lot of tunes in the bank that I think could really blow people away. We’ve been getting better and learning more with each release and we are super excited to show everyone the next chapter of Moore Ave.

Josh: Well, we had a CAMEO made for us by George Petit of Alexisonfire, they’re like my favourite band… I don’t expect to collaborate with them specifically but I would love to try and work with any one of the members on a tune or in a show or something.

Jack: We had some ‘beef’ startup with a band we thought were our friends…Trauma Lanes… They came after us because we both had new music releasing on the same day in March. Our tune ‘6 feet’ was released on the 26th as well as their album ‘Nosferatu.’ I’d really like to be able to squash that, put our musical differences aside and maybe work together.

Joe: Do you remember Ed The Sock from Much Music? Well, he is starting up a new program similar to Much Music back in the day but with the original ideals called New Music Nation. It’s going to be geared more towards independent artists. I would really like to catch his attention and be a part of that.

Josh: Finally, I think all of us would like to have the opportunity to work with some well-established indie record labels. There are a bunch in the area; Hand Drawn Dracula & Sonic Unyon to name a few; that I think we could fit really well with. We want to continue taking Moore Ave forward and there are endless possibilities for what the future holds.