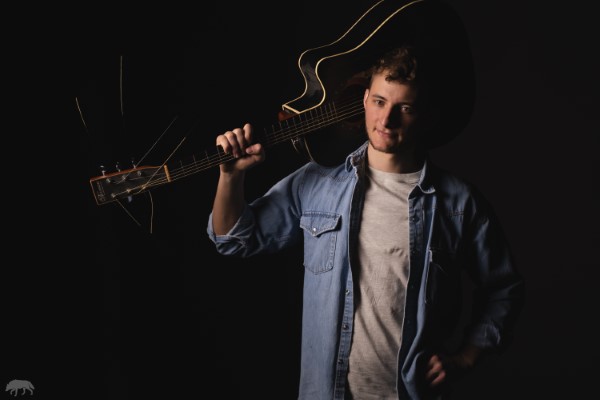 Niagara, ON-based Americana & folk singer-songwriter, Gravely James has spent a decade playing trumpet in a variety of jazz bands, which has inspired him to incorporate blues, soul, and rock into his art.

Although 2020 has been limited for performances, he has released a stripped-down roots/blues recording titled From Steve’s Shed in partnership with Snareguy Records. Gravely James wrote all music except for “103” which was co-written between James Schaming and Gravely James. All tunes are performed live off the floor, with extra instrumentation added after the original take.

The album has received much praise and has already been getting steady airplay throughout North America.

He has now released a video for the newest single, “Shoot ’em Down”, which you can check out below, and also find out more about Gravely James via our Five Questions With segment.

Hello Canadian Beats readers. My name is Chris Madronich, known on stage as Gravely James. While a lot of people think it’s pronounced “Gravell-y” in a way that might represent the rasp in my voice, it is actually pronounced “Grave-ly”. I got this moniker by combining my Fathers name with my mother’s maiden name to represent my brand –  a foot-stomping, string-breaking son of a gun who is inspired by the old blues-folk roots genres. While I have been a guitarist/ songwriter for quite some time, I actually started out as a trumpet player, playing frequently in Niagara over a span of nine years. An interesting fact about me: I actually burnt my hand on an Iron at a very young, adventurous age and have scar tissue right across my index finger. This actually makes my bar chords much easier to produce as I can capo my finger across the neck with ease. I would not recommend this method of conditioning to other guitarists.

I have always been attracted to the blues, and folk styles. I love how blunt a lot of it is. There is a certain conviction in what they are saying, especially when it is stripped-down and not hiding in too much production. This is the way I would describe my writing. If I feel a certain way, or if I have experienced something worth writing about, I like to write it with conviction whether it is fiction or not. Musically, I typically write first as a guitarist or a trumpet player – the guitarist in me hears the lick or groove while the Trumpet player hears the melody/vocal line. The lyrics often come from the thoughts that are going on while that trumpet player and guitarist are having a conversation. Some of my best work has been completed in 40 minutes and some has taken years to complete. Some tunes have been written and re-written and I’m scared they will never make it to an ear other than mine.

This pandemic blows man. Usually, I can feed my creativity by trying out new ideas for audiences and see how it sticks – which usually produces the next idea. I find a lot of my creativity comes from performance. But heck, what are you going to do?  This ain’t the time to mope around!  Lately, I’ve been trying to read more with the mentality of “If you want to put more out, you have to put more in”. I think that switching instruments has helped a lot too. I find getting on the piano, or bass gives you a new perspective to work from. I’m also trying to limit my stimulation from screens the best I can to promote deeper, undistracted thought – fishing has helped with this, I think. I also try to write every single day, whether a lot or a little.

I’ve got a tune called “Shoot’em Down” that I recently released on an album called “From Steves Shed”. I recorded the whole album live off the floor, to begin with, and then added a couple of players on top. Shoot’em Down was one of the tunes I included Ji Sharp of Road Waves ripping some acoustic lead and Steve Goldberger on stand-up bass.  I wrote this song the day after the Vegas shootings in 2017 in a very upset state of mind. You can check out the music video for “Shootem Down” on Youtube, or hear it on all of the streaming services.