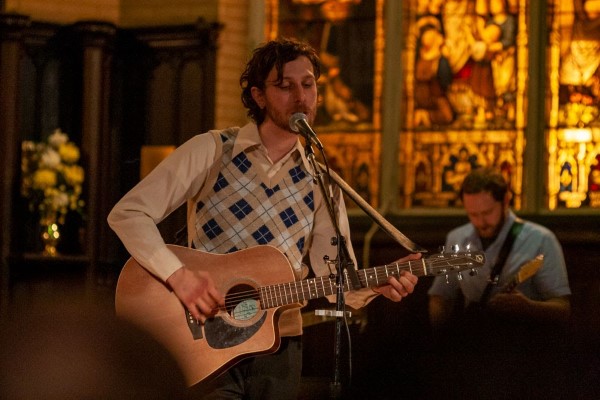 Great Lake Swimmers are sharing the live version of “I Am Part Of A Large Family” from their upcoming release Live At The Redeemer 2007. The new live album is set for release as a vinyl double LP and on digital platforms in May 2021. The concert capped off the band’s Canadian spring tour of 2007, just days before the group continued on to embark on a full European tour to support the newly released album Ongiara.

“This live version of ‘I Am Part Of A Large Family’ has one of my favourite Great Lake Swimmers live band lineups” says songwriter Tony Dekker. “Bob Egan on dobro, Owen Pallett on violin, and Basia Bulat on backing vocals, alongside the core four-piece band at the time. There is an energy in the performance which is absolutely intrinsic to that place and time. The live version rivals the album version in my mind, and really flourishes once the band gets going, transcending the sum of its parts.”

Live At The Redeemer 2007 was originally recorded for a radio broadcast at Toronto’s Church of the Redeemer by producer and engineer Ron Skinner, with live sound mixed by Andy Magoffin, who also re-mixed and mastered the recording for this release. Live At The Redeemer 2007 is notable not only for the grand acoustics of the church it was recorded in, but for the raw first impressions of songs that would become fan favourites, as well as notable guest appearances by Basia Bulat (backing vocals), Owen Pallett (violin), and Bob Egan (pedal steel) in addition to the band’s core lineup. The live set is comprised of songs from the first three Great Lake Swimmers albums; Self-titled (2003), Bodies And Minds (2005), and Ongiara (2007).

“As I write this, we are very near to the year mark of a pandemic that has put much of the world into holding patterns of lockdown, isolation, and closures” explains Dekker. “It has been devastating on many levels, but there are silver linings; for me, it’s been a chance to press pause and reflect, with part of that being a look back, and taking stock. That has led to, in this down time, the opportunity to go through the archives of Great Lake Swimmers live recordings from over the years, and a few things were found that I think are worth sharing.”

Live At The Redeemer 2007 Tracklist:
Your Rocky Spine
Backstage With The Modern Dancers
Various Stages
Bodies And Minds
Put There By The Land
I Am Part Of A Large Family
Changing Colours
Moving Pictures Silent Films
There Is A Light
Let’s Trade Skins
I Will Never See The Sun
Passenger Song
Where In The World Are You
Song For The Angels
I Became Awake
Imaginary Bars

Share this:
Related ItemsGreat Lake SwimmersI Am Part Of A Large FamilyKillbeat MusicLive At The Redeemer 2007Ongiara
← Previous Story Weekly Beat Down – April 5, 2021 to April 10, 2021
Next Story → Ellis Schoel releases new single, “Will You Still Remember?”