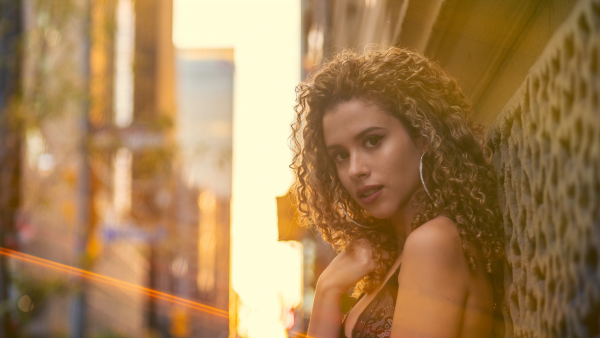 Up and coming Toronto, ON-based pop singer-songwriter Chèlle has teamed up with fellow Toronto artist, Mully on the track, “If You Were Here”, a single that narrates the realities of being separated from someone during the COVID-19 pandemic.

Unlike their usual pop dance anthems, both Chèlle and Mully decided to strip everything down to give us this vulnerable pop ballad. The main driving point of the song is the emotional and stunning vocal performances from Chèlle and Mully that give you two different perspectives of a relationship, accompanied by an isolated electric guitar.

“If You Were Here” is a song that will resonate with anyone who has ever been apart from someone they love, whether it be a lover, friend, grandparent, or child.

“Collaborating with Mully on this single was a great experience. The song was only half written and I was experiencing major writer’s block with my producer, Jonathan Karkar. When Mully came in and joined for a session it was like magic. The song was complete in a matter of minutes.

I debated performing the song by myself, but the second Mully started singing I knew that having him on a verse was the right move. The female and male perspective throughout the song gives you a captivating story from two different sides, that keeps you interested until the final line is sung.”

Check out “If You Were Here” below, and find out more about Chèlle via our Five Questions With segment.

My name is Michelle, but you can call me Chèlle. I am a pop singer-songwriter from a small town just outside of Toronto, Ontario.

Growing up, I always had a passion for singing. I was inspired to begin a singing career by my grandfather, who was a pianist and performer. I was also heavily influenced by Avril Lavigne and wanted to be just like her, so I learned the guitar and began writing my own music. By the age of 13, my mom started bringing me across Toronto with my guitar in hand to perform at as many venues as I could. After being in countless bands and performing in hundreds of shows, I released my first singles at the age of 17, under my name Michelle Cavaleri.

I decided to re-brand and change my stage name to Chèlle in the summer of 2020. Ever since then my music has been taking off. In January I got to release my disco-inspired single Hallucinating You which has received over 10,000 streams across all platforms.

I love to create pieces of art and share them with the world, in the hopes that someone out there can relate to my stories. I love getting people to dance at my shows and feel good, allowing them to let go of any stress or worries they may have.

I like to create music that makes people want to dance. My favorite genres are pop and funk, pulling inspiration from artists such as Bruno Mars, Dua Lipa, and Ariana Grande. Lately, I’ve been writing with my producer, Jonathan Karkar, and this past year we have created music that I am insanely proud of.

With that being said, every so often I like to strip away all the glitter and lights to show a little bit of my vulnerable side. That’s what I did with If You Were Here. If You Were Here is comprised of simple guitars, strong vocals, and tells an emotional love story.

When writing together, my producer Jonathan Karkar and I start our process by finding songs that inspire the mood that we’re currently in. For example, for If You Were Here we pulled a lot of inspiration from Sam Fisher’s The City. We loved the sound of the isolated guitar accompanied by strong lead vocals. Once we had an idea of how we wanted the song to sound like, we began brainstorming concepts and storylines. Mully came in and helped us finish the song by pulling in the male perspective. It all came together like pieces of a puzzle.

At the beginning of the pandemic, I was very optimistic. I kept myself busy by writing as much as I could and getting in the studio when it was safe to do so. I put all of my energy into my first two singles. Whether that was recording in the studio, promoting, or making DIY lyric videos, I was very busy.

It was around the end of January where I started to feel defeated. Like many others, when I realized it’s almost been a year since I’ve been able to perform live, see my family, or see my friends, it started to get to my mental health. Around this time was when I wrote If You Were Here with Jonathan and Mully. I let them know how I was feeling, specifically about being apart from my boyfriend for months on end. That became the focal point of the song. I’m happy I was able to get out of my creative funk and put my thoughts into music. I hope someone out there can relate to this song and maybe feel a little less alone.

As much as I love all of my previous releases and how energetic and fun they are, I would suggest for someone to listen to If You Were Here. The reason behind my choice is because I think this song can bring a lot of comfort to somebody who is going through the same thing as I am right now. Not being able to see loved ones throughout the pandemic has been heartbreaking, and I hope this song can help someone get through this struggle.

As previously mentioned, my biggest role model growing up was Avril Lavigne. I felt like I could relate to her a lot, both of us being singer-songwriters from a small town in Ontario. I’ve been following her Instagram and I’m excited to hear the new music she has been cooking up.

As for current artists, I have been obsessing over Justin Bieber’s new album JUSTICE. His music has evolved so much since he began his career, and I think this is some of his best work to date. Go listen to it if you haven’t yet!