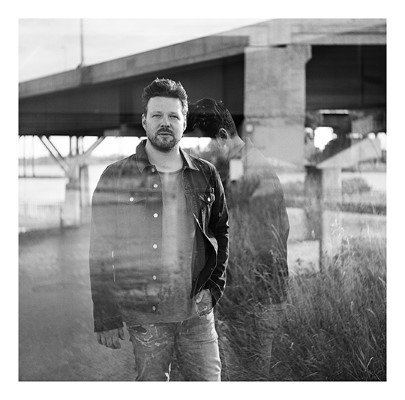 “Diamonds” is an acoustic track that serves as the last song and the lead single from the Saskatoon, Saskatchewan-based musician’s forthcoming sophomore record, The Miracle of Being — coming this September 2021.

The nostalgic-feeling and introspective folk number was written solely by Kuzbik and features Erik Sample on drums, Nevin Buehler on bass, and Steph Cameron on backup vocals. As the head honcho, Kuzbik not only lays down all vocal and guitar work on the release, but he produced it too.

On writing “Diamonds,” the renowned musician, father, and husband said it came to him during a rainy Father’s Day weekend in a tiny cabin somewhere “up north.”

With a little help from his family, “Diamonds” was inspired by the idea of sending a message to his son, Nico, for him to rediscover in the future. The lyrics are a gentle reminder to choose love and see the diamonds within ourselves, rather than chasing a life of meaningless material things.

Kuzbik describes “Diamonds” as “a warm, nostalgic folk-rock track that reflects on the simpler times of youth from the grown-up reality of young fatherhood.”

Check out the video for “Diamonds” below, and find out more about Paul via our mini-interview.

Absolutely! My name is Paul Kuzbik. I’m a singer/songwriter and guitarist from Saskatoon Saskatchewan. I spent most of my 20s and early 30s playing in rock bands and touring around Western Canada. After becoming a father I took a little bit of a break from music, but I started writing songs and found myself back in the studio before long. “Diamonds” is the first single from my upcoming second full-length album The Miracle of Being, which will be out this fall. I live with my wife Lisa, our five-year-old son Nico, and our yellow lab Forest. We split our time between the city and an organic farm about an hour outside of town. I am a big fan of nature, running, yoga, music, good food, and my friends & family.

Tell us about the recording process behind “Diamonds”?

It’s interesting because I had already wrapped up the bed tracks for the new album before I wrote Diamonds. I was up at a little cabin in Northern Saskatchewan during Father’s Day weekend with my family last year and it was a rainy day so the acoustic guitar came out. I have this great Martin OM 45 that I bought from Avenue Guitars in Edmonton right before they closed down, and my son kept pointing to what he thought looked like diamonds on the guitar, which are the inlays on the fretboard. I kind of started singing the “you got diamonds” hook over some chords and quickly got really inspired. I had the idea that through the song I could send a message to my son Nico for him to rediscover in the future. A gentle reminder to see the diamonds within ourselves and choose love. It was one of those rare moments where to song kind of fell out of the sky. The following Monday I called Erik Sample, the drummer on the upcoming album, and told him “we got one more!”. He came in and we cut it in one day.

Without a doubt, it would have to be having the opportunity to spend so many consecutive days just being at home and being present with my son. Fatherhood is a trip and is more rewarding than I ever could have imagined. I started hosting a radio show on my local community radio station in Saskatoon, CFCR. That’s been really nice too. Making this record was one of the most memorable experiences I’ve had in the studio as well. We had such a singular focus on what we were trying to accomplish, combined with knowing each session could be the last with the ongoing pandemic. There were no guarantees and each day was a celebration. It was a great reminder of why music is so good for the soul.

Normally with a new record coming out, I’d be hoping to tour, but with the current state of the world, everything is up in the air. I’m just hoping to focus on the craft of music, keep learning, and doing good work. “Diamonds” feels like a new beginning for me musically and I’m really excited to share more. If I can’t get out on the road this year I’d imagine there might be more recordings. If the opportunity presents itself to get onstage and play some shows I know we’re definitely chomping at the bit to play the new stuff live.

So many people! I’d love to work with Dallas Green in the studio. I dig his ear for production and what he’s doing with Still Records. Terra Lightfoot, Dan Mangan & Bahamas all come to mind too. Ben Harper, Hannah Georgas, Wilco….the list goes on. That’s the great thing about the singer/songwriter thing, I go through phases as a person, so it’s cool to let the music go where it wants as well.