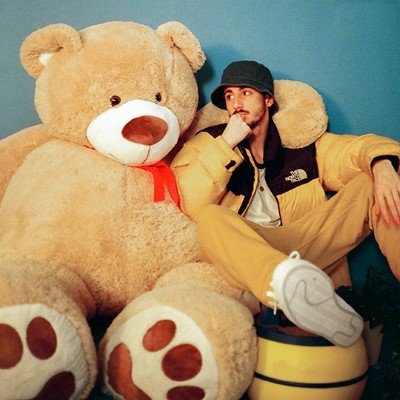 Though he’s been releasing music since 2017, Joji began to blow up late last year after releasing the lead single off 2021’s A Stranger Everywhere, “Puerto.”

The 24-year-old musician began making music at the mere age of six, but it wasn’t until his late adolescence that he began playing the drums and recording his vocals. Once he turned 19, music became Joji’s life.

While living in Canada, the ambitious singer has stayed true to his French roots throughout his career by releasing a mix of French and English singles and EPs. Though A Stranger Everywhere highlights the young virtuoso’s sound as a singer and rapper, his overall approach to music is extremely versatile, as he intertwines various styles with different upbeat house tempos.

Following the release of 2018’s debut LP, Aminals, this year’s sophomore full-length offering of A Stranger Everywhere was first developed in early 2019 after an unexpected surge of creativity and recording a mass number of demos — each, for the most part, covering a different genre.

Though the musician intended to make the release as versatile as possible, he wanted it to give him a core identity: a troubled yet talented musician, with no real roots or ties to a specific place.

“By the age of 19 years old, I had already lived on four different continents. I was born in Australia; moved to Paris as a child; moved to Hong Kong as a teenager; then moved to Canada as a young adult.”

Though the culturally enriched artist said there were “so many benefits of growing up in different corners of the world” — including learning about all of the different musical styles he’s covered — he admitted to not knowing where “home” really is.

That feeling of being lost is exactly why Joji decided to not only call the new eight-track album A Stranger Everywhere but why he recorded half of it in French and half in English.

“I’ve grown to feel comfortable in many places, but (I have) the frustration of not feeling attached to one particular place,” said Joji. “I feel comfortable singing/rapping on many different styles of music… But along the same lines, this is the reason why I decided to have half of the EP in English and the other half in French.”

Check out the video for “Sa Mère” below, and find out more about Joji Redback via our mini-interview.

My name is Joji Redback. I’m a French/Australian singer and rapper and have been making music for quite some time now. I’ve been living in Montreal for the past six years which I now call home. I have lived in France, Hong Kong, and Australia before moving here. I truly love music and try to be as authentic as possible in everything I record; whether it’s in the good or the bad moments.

Tell us about the recording process behind “Sa Mère”?

I’m happy that you ask because there was quite a usual process behind the recording of “Sa Mere”. My friend Franklin Cantegrel had sent me this house music loop that I really liked. Although, it was a loop, meaning that the same loop was playing over for like 2 minutes. I recorded the whole song at home on that same loop. After having recorded the song, I was vibing to it and knew that there was a way to spice it up. I sent it to a few friends that make music and no one was quite able to bring that special touch that I was hoping for. I sent it to my homie YASKA that lives in Paris and he added that guitar that created the hook in the middle and at the end of the song. So that guitar was not initially there when I recorded the song. Huge shout out to YASKA and Franklin Cantegrel for this unexpected collaboration.

Wow, that’s quite a hard one… This may sound weird, but I believe the highlight of 2020 for me was actually losing my job haha… I was working as a producer for Airbnb and it was taking up a lot of my time and energy, meaning that I barely had the time to get creative and make music anymore. I lost my job as soon as covid hit and quickly got back to making music on a daily basis. If I hadn’t lost my job, I don’t think that my project A Stranger Everywhere would have ever existed. Losing my job forced me to focus on what I actually liked; it was a blessing in disguise hahaha

What I’d really enjoy for 2021 would be performing at a festival. I truly doubt that it will happen given the current circumstances but that was my initial goal for 2021. Other than that, just making more music and keep having fun doing it.

I’ve been saying this for years already, but the one person I’d love to collaborate with is Kaytranada. I’m a huge fan of his music and his person as well! Not only is he also based in Montreal, I feel like our styles could match really well. My favourite style of mine is rapping on house/funky beats and Kaytranada is the king of that genre. Whenever I just want to write random lyrics and don’t have a beat with me, I’ll type “Kaytranada type beat” on youtube; no joke hahaha