Five Questions With The Ember Glows 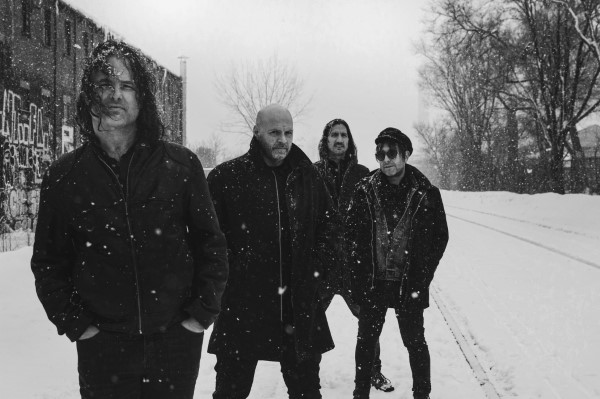 As I sat and listened to their debut offering, I immediately enjoyed the energy pulsating from each track. The third and fifth tracks, “Man on a Mission” and “New Wave Drive” were standouts for me. The two upbeat tracks kept me entertained and had my feet tapping.

The Ember Glows was formed in early 2019 by members of Room Control, Repo, Scene Noir, and Citylake. Richard Bunze (guitar), Kevin Hills (bass), Martin Saint (voice, guitar), and Dan Stefik (drums) crafted a sound that relies on simple hooks over a pulsating rhythm section, textural guitar interplay, and baritone vocals. As a performing band, they make subtle use of dynamics and trace most of their roots to the moodier side of 80’s new-wave, psych-rock, and 90’s British indie music.

“We came to call this EP ‘Passerby’ because the lyrics contain multiple references to being a transient on a few different levels, whether lost in a foreign city, riding in a taxi by night, or even drifting away in your own life. It wasn’t planned this way but since all 5 songs date back to the same period, it just happened organically.” says singer/guitarist Martin Saint.

Passerby was recorded at Freq Shop studio in Montreal over 3 days in the summer of 2020 by Eric Saucke-Lacelle, who also mixed the recording.

“Their energy and emotions really come through in live scenarios, so we stacked the deck in our favor.” says Saucke-Lacelle. “We tracked live off the floor, no click track, just raw energy, awesome tones, and tons of emotion right into the mics. We did about 30 takes, and every single one brought us along a different emotional rollercoaster. It’s funny, working with this band you never know what to expect, but you also always know what you’re going to get; serious energy that moves you. There’s no way you finish the album and don’t say “well, that was a trip” and grab a cigarette before round two.”

Check out the EP below, and find out more about The Ember Glows via our Five Questions With segment.

Hi, this is Martin Saint, vocalist and rhythm guitarist with The Ember Glows, a Montreal-based four-piece originally formed in 2019. Apart from myself, we have Richard Bunze on lead guitar, Kevin Hills on bass, and Dan Stefik on drums. Since we were all busy with various other bands, this only started as a side-project but as we felt such good chemistry together, the whole thing snowballed and we all started to believe more and more.

Very important to mention too, we’re all good friends and we think this can be felt in the music.

Our sound borrows from the moodier side of 80s new wave (Simple Minds, The Cult, Echo & The Bunnymen, old U2 among others) and 90s British bands such as The Verve or Pulp for instance.

Each member brings a different flavour to the table but we all have a common ground that holds it together. So we don’t deny our influences but we don’t feel we’re derivative either. Our own sound stems from the blend of these diverse musical backgrounds. We like solid grooves, atmosphere, intricate guitars, the odd keyboards, cinematic lyrics and we do our best to deliver it all with a lot of energy.

Like everybody else, we did what we could, tried to adapt. We always stayed in close contact, talked almost every day, keeping ourselves stimulated as a band, held the odd virtual meeting here and there all the while making sure we kept the momentum going. We kept writing and shared phone recording demos whenever a new song idea came up, that sort of thing. Then as soon as it became feasible we started rehearsing again, staying as cautious as possible of course.

The answer will depend on which day we answer this question, I guess!

Martin: Our friends Did You Die (Victoria) and Queens & Kings (Toronto), also Peeling (Toronto), Concavity (Hamilton) and among the more established artists, I’ll always have a soft spot for fellow Montrealer Sam Roberts.

Kevin:  A few of my choices overlap with Richard’s but I’ll add PEAKS (Ottawa), SU (Montreal), and also from Montreal, Oiseau de Proie