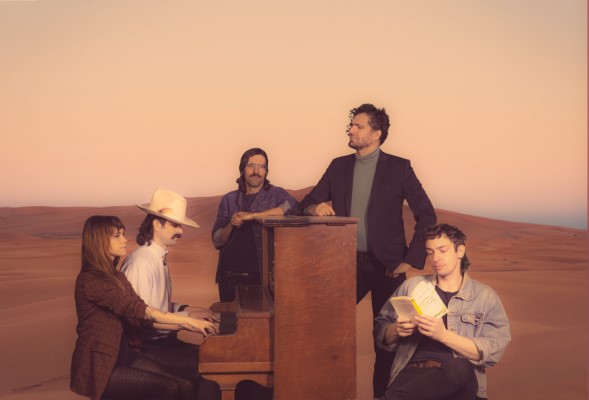 The new single, “Troisième semaine” speaks of the inevitable pitfalls that come with wanting to accomplish something while not being fully prepared – which is somewhat the story of the band, but we get there, we don’t stop, all messed up but yet again.

“Troisième semaine” is doubled with an animated stop motion video directed by the essential (and pretty good) Philippe Beauséjour aka Phil Console – the first part of a triptych in which the band, led by emblematic cowboy Daniel, get ready for their trip out west in search of an Eldorado: you gotta start somewhere if you want to at least get halfway there.

Check out the video for “Troisième semaine” below, and find out more about Jesuslesfilles via our Five Questions With segment.

We’re from Montreal, entering our 13th year as a band. We’re set to release our 4th best album (as in: they’re all the best, and it’s our 4th being so) L’heure idéale via our new label home Duprince on June 18th.

The Pandemic didn’t inspire the band per se but left us with a fair amount of free time to work on the new set of songs, and the feeling that everything was on pause made the process feel a bit lighter than usual.

“Troisième semaine”, its caracteristic urgency showcasing a poppier approach – and, incidentally, we have a brand new video for it, which was directed by our friend Phil Console.

Sarah McLachlan was a legit inspiration for L’heure idéale. Also music by our friends Corridor, Jonathan Personne, VICTIME, Laurence-Anne (who appears on the new album), Crabe, Thierry Larose, Alex Burger, Vanille, Joseph Carré (we have a lot of friends). We share members with bands such as Malajube, The Blaze Velluto Collection, Bon Enfant, I.D.A.L.G., and Penny Diving. This is all good, but, first and foremost: Sarah McLachlan.