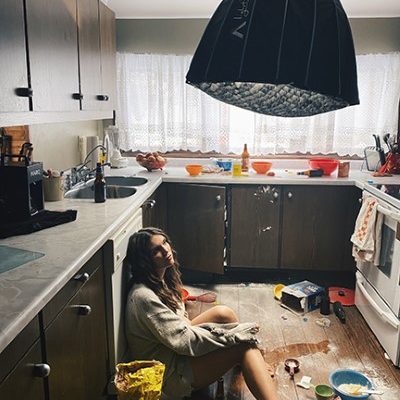 “For me, the concept of the ‘sweater’ represents the physical objects we tend to cling onto after a relationship has ended, and the other person has ‘checked out’ long before you have,” she explains. “This idea of ‘what do you do when everything except them has been left behind’ really stood out to me; all of a sudden, these insignificant objects hold so much weight.”

“For this video, I worked with Dylan again — who has been nothing less than amazing,” velours says. “He’s so talented, and his direction brings the message of the song to another visceral level.”

“I was very aware that ‘Your Sweater’ was going to be very different from ‘Summer Haze,’” velours considers. “‘Summer Haze’ was the most intimate song I wrote for Identity, and it’s meant to evoke a feeling of renewal…

“‘Your Sweater’ inspires a renewal all its own, but it very much takes its own direction.

“Dylan and I talked a lot about my intentions for the song, and the symbolism of the sweater,” she continues. “He came up with the incredible concept of the sweater slowly falling apart throughout the entire storyline until I’m ‘free’ in the end. It’s a metaphor — along with the smoking, drinking, and the tearing of the sweater — for the pain, and just immersing yourself in toxic tendencies to not even relieve the pain, but actually indulge it…

“The ruins you’re trapped in, and how you destroy yourself by holding onto and dwelling on something that’s gone…

“The video was shot at my grandparents’ cabin, and on the highway nearby — no green screen, just raw footage of me in the dead of winter. The last chorus is all outside, and drives home the freedom and shedding of the remaining pieces of that person who broke you.

“It’s really uplifting to shed the past’s pain, and start again without it. ‘Your Sweater’ brings that message to life.”

Check out the video for “Your Sweater” below, and find out more about velours via our mini-interview.

Hey, everyone! I’m velours and I’m an introvert who writes emotional alt. pop songs. I also act and write poetry. I love to read, I’m an avid movie and tv show watcher, and I love my mom and our 5 animals so, so much! I grew up with a variety of music genres and they’ve all been inspirations for the sound I create. I’m really passionate about making music and connecting with people on a visceral level through the music I write.

Tell us about the recording process behind “Your Sweater”?

Absolutely! I wrote it after a break-up and was inspired by how emotional we are when it comes to things that belonged to the other person. How something like a sweater can mean so much even when the relationship that gave it that significance is gone and just in ruins. When I’m writing music, I like to start with an emotion, the more complex the better, and turn the dramatics up to 11. What’s art good for if not creating a reality we can relate to but that is also fictionalized? Sometimes fiction is more relatable than reality, honestly.

I remember meeting up with my producer, Ryan Stewart, at his studio and when I sang this song, we agreed it just felt right. The recording session went so smoothly and the production was just as seamless! He totally got and really liked the motive for this song, in that it’s an upbeat, fun tune you want to rock out to—and then you pay attention to the lyrics and realise, “oh, so we’re an emotional wreck.” We recorded “Your Sweater”, along with “Summer Haze” and “Good Boy”, in a few days together in his studio and he worked his production magic. Having that experience and having Ryan and I just click about the song’s meaning and intention, it was all just amazing!

Some really wonderful people, both friends, and strangers alike, have messaged me saying how they can relate to or have gone through an emotionally draining breakup like this song. That’s been so touching to me because it really shows how we’re all going through life together and how many of us can take something personal from a song or a poem or a movie and make it their own. That’s what I love about making music; I love the connection it creates between you and the people listening.

The highlight of my 2020 was definitely the release of my single and music video for “Summer Haze” in late August, as well as the subsequent EP Identity that was released in September. It just opened so many doors for me and I’m so grateful for the reception they’re still getting and, in turn, the opportunities I’ve been able to utilise in the music scene. For example, being nominated for two Saskatchewan Music Awards my first year as an artist was an honour and an unexpected highlight! Especially during this pandemic, music has a way of connecting people like nothing else.

I hope to continue growing as an artist and working with more people I admire in this industry, as well as continuing to make music and reaching a wider audience. Overall, as long as I’m creating and learning from other artists and pros in the music world, I’ll feel accomplished!

I would die if I could collaborate with Jack Antonoff, Joel Little, Grades, and/or Mark Ronson on a future project. They’re amazing producers and have worked with some of my favourite artists! Tori Amos, The 1975, Harry Styles, The Weeknd, Lorde, Taylor Swift, Conan Gray, Troye Sivan, Eddie Veder—all of these artists are huge inspirations for me, and if I could have the opportunity to collaborate on music or open for them at a concert or a concert tour, that would be a dream come true!