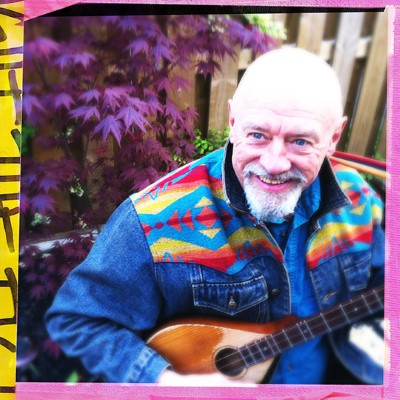 In this thought-inducing song — which echoes the struggles and sadness associated with the ongoing COVID-19 pandemic — the award-winning singer gifts listeners with an offering of telling lyrical images, buttery guitar melodies, and emotional phrases, complemented beautifully by the harmonized backups of singer Rebecca Campbell.

“Mercy” was written by Frank months after the beginning of the global health crisis. He describes it as a “prayer for these fragile times.”

He enlisted local producer — and long-time collaborator — Rob Greenway (aka brilliantfish) to not only play drums and keyboards on the special track, but to produce it, and create the enticing and just-released music video for it, too.

“written from one man’s observations, feelings and sense of loss about the complexities of the COVID-19 crisis by bringing it all down to one simple statement: ‘Please tell me there’s still mercy here.’”

He wanted it to serve as a message of hope, despite the consistent sense of hopelessness that has loomed above us all in the last year.

“We thought it was not only important, but necessary to make an artistic statement on the current world situation from a personal perspective,” Frank concluded.

brilliantfish’s music video takes a close look at the devastating emotional and psychological toll the pandemic has had on everyone: not just the victims, but their families and the frontline workers who have been working so hard for more than a year now, as well.

Check out the video below, and find out more about Frank via our mini-interview.

Frank Patrick here!, I’m a Toronto singer/songwriter! I play guitar, frankolin (an instrument I designed), Kalimba (imbira), jaw harp, and assorted hand drums. I have toured Canada, the U.S.A. (Including Hawaii), and parts of Europe! Sharing the stage with Cyril Neville (Neville Brothers), Jonathan Best (David Byrne), Kevin Breit (Norah Jones, Cassandra Wilson), Buffy St Marie, and (YES!) Dr. Timothy Leary! I have also composed and performed music for dance in California and Toronto. I toured Europe as a music collaborator for the Dora Award-winning “Sable/Sand” with Dancemakers! I have made 3 CDs and one EP of original songs. The first CD, as singer and composer for the band Zombo Zombo, was very well received in the U.S.A. Charting as #1 for all the KMUD affiliates in Northern California for two months. The next CD was in collaboration with producer/musician “brilliantfish” (aka: Rob Greenway) It was called ”Worlds In Transition” and featured Hugh Marsh and  Kevin Breit! It won the world music song of the year for “Believe”, runner-up blues song of the year for “Boneyard Road” and “The Man Who Walks Alone” was chosen for the worldwide compilation for “Diaspora for Africa”! I also released another CD “Soul Medicine” in 2019 with “brilliantfish” producing and playing drums and keyboards. The recording also featured Ian de Souza on bass, Brian Macmillan and Cam MacInnes on guitars, Jerome Godboo on harmonica, and Rebecca Campbell and Tracy Coveart on vocals. We also released two wonder-filled videos from that album!  The first was for “Spectruma” (“all the living colours”) and next, the title track “Soul Medicine”. Both were produced by “brilliantfish”. I have been inspired by any tunes that ring true to me in word and melody!!! My writing covers many styles and has chosen many times to introduce my offerings as “Transglobal Rhythm and Song”. “Mercy’ is the first single for our soon-to-be-released full album “The Almighty We” featuring all the same players as the “Soul Medicine” album. Plus the amazing Ed Michael Roth on accordion!!!

Tell us about the recording process behind “Mercy”?

“Mercy” started as an outpouring sketch on my home studio after reading of the death of my lifetime songwriting inspiration, “John Prine”, dying from Covid 19!!! I had also just finished watching an episode of “60 minutes” showing the never-ending lineup for testing and revealing the corruption on many of the supply lines for Covid 19! I had already started to record my soon-to-be-released album, not yet called “The Almighty We”! I knew the song was important and needed to be a vital part of that upcoming album. I sent it to my very special friend and producer “brilliantfish”, he was blown away and very very inspired by the tune. He, of course, had song and arrangement suggestions, and wanted to record it ASAP! I then recorded my bed track guitar and scratch vocal at his studio “Session House”! He added drums and some atmospheric keys! We then sent the tracks to Ian de Souza for bass and Brian Macmillan for added guitars. After that was all compiled we were so blessed to have Rebecca Campbell come in to add the backup vocals. Rob then edited, enhanced, and arranged it all. He added the prayer gongs as a final special touch!!!

2020 Highlight???? You’re kidding right! Ha! Ha! Of course, due to the self-isolation, distance keeping, mask-wearing, wasteland vibe surrounding this past year it’s hard to focus and find a highlight!!  However, through it all, I survived and maintained my health and I never would have made this album. Yay! It also gave me such enhanced inspiration to write and give birth to “Mercy” and many of the songs for the upcoming album “The Almighty We”! Songs poured forth from the “I can’t breathe” death of George Floyd to the “On We Breathe” season of the green and binge-watching Netflix!

With my band, trio or solo, I would love to feel and be part of the return to “Live Music”!  To have my life enhanced by my music enhancing the lives of others, on radio, online, on film, and of course, live. I would also like the opportunity again to go and share my music live, overseas, and south of the border! All over the planet!!!

I would love to open/share the stage with,  Peter Gabriel, Paul Simon, Bruce Springsteen, Bruce Cockburn, Randy Newman, Buffy St Marie, Daniel Lanois, David Byrne, Stevie Wonder, Patti Smith, Joni Mitchell, and on and on. I would collaborate with all or any concerned souls!!