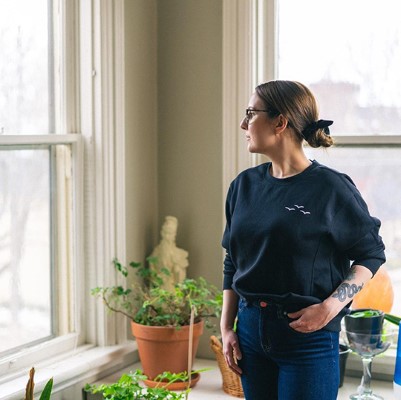 The latest to land from her breakthrough EP, Good To You, the song grapples with the concept of love — and how difficult it can be to grasp.

While the word, in and of itself, denotes feelings of joy and happiness, the reality behind such an emotion is that of balance; with balance comes weight, and “Reassure” exemplifies the beauty in the struggle in such a reflective way.

In terms of metaphors, the single is representative of Faye’s thoughts on the cycles of relationships, as well as the impulsivity of rushing into a romantic connection. She compares these experiences to pillars, in the sense that two people can pull apart yet still be close together by way of the weight they both share.

The weight, she describes, is structured around the intertwining of boundaries and desires.

“I’d been walking around the city and on hiking trails aimlessly,” she shares. “I noticed these tagged pillars that always stood out to me as being a cool piece of architecture. This is a song that illustrates the ebbs and flows. Ultimately, in a healthy relationship, the pillars still stand strong but they are always just the perfect distance apart to keep the structure sound.”

The video itself is vibrant. It revolves around a still of Faye’s face as it’s surrounded and augmented by soulful imagery that relates and reflects the song’s message. Interspersed throughout the video are live action cuts featuring the musician performing the song.

Check out the video below, and find out more about Deanna via our mini-interview.

I’m a musician, songwriter, and die-hard music fan originally from Aurora, Ontario. I like thinking, talking, and writing about all things music and creativity. I have been a musician my whole life but only decided to become a solo artist in the year 2019, when I began writing songs for what would eventually culminate into my first EP, Good to You.

I have a lot of songs that are unreleased because I wasn’t always confident that I could pursue a career as an artist. Experiencing some major life changes gave me the bravery to follow my passion and today I am in the process of recording and writing music regularly. On my EP, I worked with producer Gavin Whelehan and some excellent musicians such as Charlotte Cornfield, who played the drums on the record. I host a new weekly series on YouTube called Songwriting Sunday, where I discuss insights about the creative process, music, and songwriting. Right now I’m in the process of practicing music production, bass guitar, and keys for my first attempt at a self-produced record.

When I’m not working on music, I like taking long walks, listening to podcasts, reading, and staying active through hikes, running, and dancing. I make a lot of jokes on Instagram and I’m also a big movie person.

Tell us about the recording process behind “Reassure”?

“Reassure” was written by me last year during the early summertime. I’d been taking a lot of aimless walks around Toronto and the many ravines in the city and I found these tagged pillars that made me think of lyrics for a song. I wrote the music aspect partially from a chord progression idea I had been fumbling around with and the theme of the lyrics about the pillars matched it. That became “Reassure”. Being completely new to being a solo artist I didn’t know enough about production and I knew I needed help to record my music, so I reached out to Revolution Recording on a whim. Kim Cooke wrote back to me and actually connected me to Gavin Whelehan, who produced the EP. We recorded the guitar with my Les Paul and there was actually a weird error in the recording that we kept in there very subtly. The guitar had a bit of a twang or buzz that sounded a bit off but we liked the sound of it. It was recorded in Gavin’s studio. Charlotte Cornfield played the drums which were recorded at Revolution Recording. It was kind of a surreal time because this was my first professional recording and it was also during a pandemic.

I think for me the highlight of 2020 was the recording of my EP. I had a lot of fun working on it and I don’t regret choosing to pursue music even if it was during a difficult and strange time. I was extremely happy to have completed my single “Reassure” and I felt like I’d fulfilled a dream of mine that was a long time coming. I’m really thankful for everyone that supported me and also to those who listen to my music.

I’m hoping to self-produce new music. It will probably take longer and be much more of a process, but I’ve started recording in a home studio and am working away at new material. I hope to make music that is even more aligned with the style of music I want to create. I want to have a more retro and warm sound that is reminiscent of the 60s and 70s. I want to finish a record that I can say is really my work and that I like the music. It’s an exciting time, to be honest.

It’s embarrassing but I have a long-standing music dream to collaborate with fellow Canadian artist Andy Shauf. That or Australian indie artist Julia Jacklin. Both are exceptional songwriters that I feel a connection to through their music and have been told I have a similar vibe to.