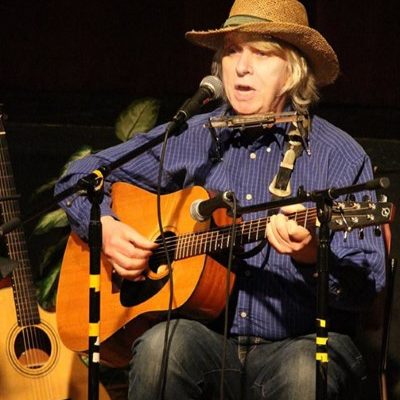 Toronto, ON-based singer-songwriter Steve Paul Simms is back with his latest single, “Blues for Back Alley John”.

The song serves as a celebration for one of Ottawa — and later, Calgary’s — finest bluesmen, the late, great Back Alley John Wilson, Simms shares.

“I conjured up a little of Back Alley John’s harmonica magic and philosophical musings for this one,” he explains. “There’s also some vintage Byward Market scenery for good measure.”

The song sits atop the swirling keyboards and biting guitar stylings of Ed Michael Roth and Bob Cohen, respectively, and is the latest to land off of Steve Paul Simms’ fourth album, Ingrid and the Messenger Boy.

Released December 2020, the 12-track LP offers a fine introduction to the Toronto-based troubadour whose signature brand of storytelling has long evoked notions of cabarets to cityscapes, dreams to memories, alike.

In all, Ingrid and the Messenger Boy is the culmination of Simms’ genre-spanning talents; while “Blues for Back Alley John” may be blues in focus, the veteran of the creative arts scene includes pop, jazz, ragtime, rock, soul, country, world, and Broadway tunes among his expansive repertoire.

Check out “Blues for Back Alley John” below, and find out more about Steve Paul Simms via our mini-interview.

I’m Steve Paul Simms, a Toronto singer, songwriter, and sometime actor. I play guitar, harmonica, mandolin, ukulele, and a little piano. Trained as an actor at The Banff School of Fine Arts and the National Arts Centre and appeared on dozens of stages nationwide. Trained as a singer with many teachers and several choirs. I’ve made four CDs of original work, including the latest, Ingrid and the Messenger Boy. From decades of playing at retirement homes and busking at St. Lawrence Market, I’ve added more than 500 classic standards to my repertoire, from Sinatra and Crosby to Johnny Cash, Elvis, and Paul Simon. For several years I have performed duets with Maya Toman in a show called Caravan of Song, featuring original music as well as folk tunes and international songs in a dozen languages. My tastes run from Brazilian sambas and Spanish flamenco to movie music, Broadway, blues, jazz, rockabilly, and fingerstyle guitar. The most common word used to describe my music is Variety. Among those who have recorded and/or performed my songs are Clela Errington, Glen Dias and The Polarity Bears, Rick Bauer, Julia Webb, John Jackson, Jeff Barnes, and Rob Wakelin.

Tell us about the recording process behind “Blues for Back Alley John”?

It began as a live-in-studio recording with two guitars and vocal. Later we added bass, drums, harmonica, keyboards, and harmony vocals. Recorded in Toronto by Douglas September and produced by him and me and Bob Cohen. Bob has been my most frequent musical partner for six years. The song tries to convey the feeling of living, working, and playing in the Byward Market of Ottawa some years ago. Back Alley John was one of the best blues musicians on the scene at that time. I try to capture a little of his harmonica sound.

The highlight was staying healthy through the pandemic to finish making a cd I’m really proud of. It contains 12 very different songs in a number of musical shades and on a variety of themes, including friendship, love, travel, karma, money, philosophy, and tributes to Ingrid Bergman and songwriter Ellie Greenwich as well as Back Alley John. There is even one song partly in Spanish, my favorite among all the languages I’m trying to learn. The whole cd is dedicated to late great musician Maurice Laframboise, a mentor, and friend.

I’d like to be playing live in front of people again, starting with my regular monthly show at The Tranzac. I want to be able to hear my songs on every radio station coming out of every passing car. And I’d like to take this music overseas. Safely!