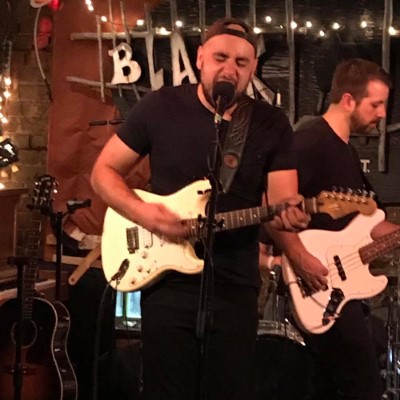 Check out “Cruel Love” below, and find out more about Jamal via our Five Questions With segment.

I am a singer/songwriter from St John’s, NL. I started playing at the age of twelve and became interested in music mainly due to the influence of my grandfather. As time went on I started playing in bands. My first group “The Uncanic Strides” recorded a 4 track demo in 2005, this was my first time in a proper studio. Fast forward to high school, I took part in a school music trip to Cuba in 2006. On that trip, we travelled throughout the island playing shows for students around Cuba. After high school, I began playing more as a solo musician and I have been performing in the downtown St John’s music scene since 2015. I released my debut single as a solo artist in July 2020 entitled “See You Again”. My second single “Cruel Love” is due to drop on February 25, 2021, and is the second release from my debut solo album.

My music would likely be classified as Rock/alternative rock. Both singles that have been completed to date are high-energy rock songs including vibrant lead guitars from upcoming artist Nick Earle. Both tracks have been recorded, mixed, and mastered by Robert Kelly out of Record Time Productions in St John’s, NL. Robert also plays bass, guitar and sings harmony vocals on the tracks. Close friends of mine (Matt Aylward & Jeff Osmond) also played on the “Cruel Love” single on Keyboards and Drums respectively.

My writing process/style varies from song to song. Sometimes, I will hear a melody in my head and immediately grab my guitar and attempt to work out what I am hearing. For other songs, I will start with a set of good lyrics and work from there. Some of my songs to date have come together very quickly others have taken a lot longer. “Cruel Love” in particular came together from start to finish in about a half-hour. I heard the main melody for the song in my head, got my guitar, and worked through it and within minutes I had the bulk of the lyrics and the song itself. It is always special when a song comes together so fast and there is something really magical about the process of songwriting.

Yes, there have been many negative sides of the pandemic for me and everyone else, but creatively it has been very beneficial to me. I have had a great deal of extra time on my hands that has allowed me to work more on songwriting and the creative process as a whole.

As this is my second release as a solo artist at this point there is not a lot to choose from, so I would say listen to both tracks! My first release “See You Again” debuted on July 31, 2020, and reached #8 on the CIOE East Coast 30. If there is a listener who enjoys “Cruel Love” I would definitely recommend they check out my first release as well. Also, I will have a lot more music coming in the future so follow along on my socials to stay up to date on what I’m up to!

A good portion of my setlist for performing solo includes music from Canadian bands/artists. I am a massive Tragically Hip fan so they are definitely my favourite. In addition to the Hip, I really like Matt Mays, Neil Young, Sam Roberts Band, The Novaks, and The Glorious Sons.