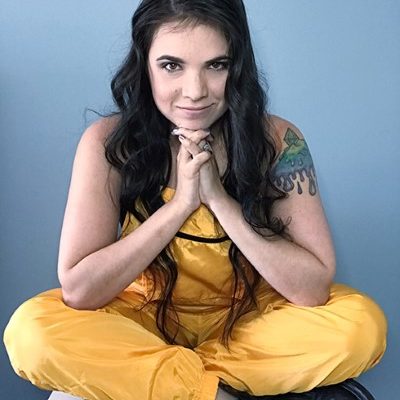 At a runtime of three-minutes-thirteen-seconds, “Millennials” presents itself with an energetic and fun power pop-rock foundation, laced with ragtime keys, trickling synths and brought together with Tricia Ftiz’s signature radiant vocal style. Her keen awareness of the generation’s stereotypes, along with the aforementioned instrumentation makes for a spirited single that’s easy to identify with and sing along to.

The lyrics address the reputation Millennials have garnered in a very self-aware manner, brought about in a playful and modestly satirical way. At the same time, they lend a voice to a generation that is seemingly misunderstood by the generations that both precede it (Gen-X) and follow it (Gen-Z).

“The line “Whoop as you please” was meant to be a way to say that, yeah, we may have destroyed the doorbell industry and everyone hates us, but we’re trying our best here so hush now,” Tricia reveals.

When it comes to the overall identity of the single, she describes it as having been inspired by friends and acquaintances who fit the stereotype.

“I wanted a song that, while at the same time made fun of the stereotype, was oddly comforting to those who relate to it,” says the artist. “My favourite part about it is the group vocals, where I gathered my best Millennial friends in the studio and we all had a wonderful afternoon whooping and chanting.”

The lyric video for the single is two-pronged. While it displays the lyrics in a sing-along fashion, Trica Fitz herself also appears in the video to embellish them with her chipper demeanour. Her appearance was (mostly) improvised, save for the inclusion of a few props, and was done in a one-shot style.

Tricia describes her thoughts on the live-action/lyric format by saying:

“My favourite thing about the hybrid format is that people are able to get a better sense of the song and its satirical undertones. It was a way to showcase theatricality and perform, and I had tons of fun with it.”

Fitz not only does vocals for the single but also sweetens it up with her harmonies and piano/synths. Other accompanying talents are Matt Nozetz on drums, bass and rhythm guitar, as well as Gustavo Pedro on lead guitar. Her vocal army on the single consists of: Felicia Corbeil, Marc-Antoine Fortin, Izzy Landry, Angela Marino, Brooke Murray, Matt Roumeliotis, Martin Thomas-Couture, Emily Yakimchuk, Jeffrey Yakimchuk.

Check out the lyric video for “Millennials” below, and find out more about Tricia via our mini-interview.

Hello, friends! My name is Tricia Fitz and I am a Brazilian-Canadian independent artist. I’ve been working in the industry since 2008 as a performer and vocal coach, but I’ve been involved in music since I was very young. I sing and play piano, ukulele, and guitar, I can wing it on a bass guitar, I can play two songs on the harmonica, one song on the kalimba, and I am currently learning violin because having your neighbours like you is overrated. I’ve been alive for three decades now, and I’ve always struggled a lot with my identity in general. But after some major life changes and what some may call a quarter life crisis, I shifted gears and decided my new musical mantra was to explore, think out of the box, and do what I think will make me happy! So, I do my best to make my music reflect that mantra; I tend to play around and mix different genres including pop, musical theatre, metal, and punk, and push myself to new vocal boundaries. In addition to that, I like to embrace a very cheesy and casual style, and so far the response has been overwhelmingly positive! I’m the happiest I’ve ever been and I hope to spread that positivity to as many people as possible!

Tell us about the recording process behind “Millennials”?

The goal was to make it fun, and I can confidently say we achieved that goal. I knew I wanted it to be upbeat, catchy, theatrical, and with tons of references. I did some research on Millennials, their culture, the stereotypes, and did my absolute best to squeeze it all into one song. My co-producer, Matt Nozetz, and I worked long hours in the studio to get the energy of the song juuuust right, and we are super proud of how it turned out! It was a long process (almost 4 years!) but it was well worth the wait and I wouldn’t change a thing about it. Filming the video was a whole other adventure, as it was all done at home, filmed and edited by yours truly. You should have seen the set-up; tissue boxes to hold up the camera, two lamps for lighting, me sitting on the ground alone in my bedroom struggling to keep my hair out of my mouth, and a cat staring in the corner questioning its owner’s sanity – DIY at its absolute finest.

There were many highlights in 2020, despite the world crashing and burning around us, and my favourite part was learning about music publishing over the summer. As an independent artist, I
find it’s super important to understand the business side of the music industry and create a strong foundation. I took an online course on music publishing and I realized that there was a whole other section of the music world that I didn’t know much about. Yeah, I know it sounds super boring, but I actually had a lot of fun learning the ropes, colour coding my notes, and I even found myself starting my own publishing company! I like to think I stayed productive in general and I hope to keep that momentum going probably forever.

I’m a fairly simple person. Any step, no matter how small, I consider a success and you bet I will celebrate it. This is the most anyone has ever listened to my music and every new listen or share is as exciting as the last. I hope to be able to reach out to more people and meet new artists and get to know more locals. However, though I am simpleton, I do find myself with big and ambitious ideas that sometimes I believe are bigger than me. For 2021, I want to push myself a little more and give my music some more love. I’m hoping to release a live theatrical performance of my latest release, Epic Penguin Sharks, so fans can have a visual experience of the album. Just gotta find out how much it’ll cost to get inflatable sharks and penguins…

Devin Townsend, if you’re listening, call me, pretty please. I would also love to play with LIGHTS or Paramore, and hopefully, someday headbang with Andrew W.K. I also think it would be super fun to play an outdoor event like Bluesfest or Osheaga, and just be surrounded by people who I can learn and take notes from.