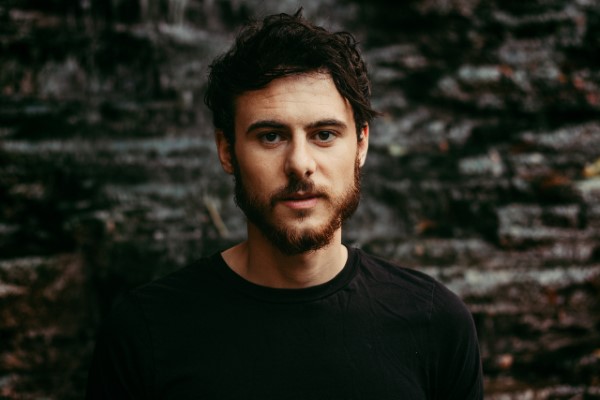 Jordan Hart is carving out a name for himself in the singer-songwriter landscape, thanks to his debut EP Only Pieces of the Truth.

The self-produced EP is centered around themes of connection and vulnerability. Hart — Alberta-born and now living in Toronto — worked with several producers over the years, though none were able to quite capture his unique sound. After securing a record deal with Believe and AllPoints, he was persuaded to try his hand at producing.

Hart’s musical journey has been one of self-discovery and philanthropy. In 2019 he embarked on a 100-day busking challenge in Toronto. Through harsh thunder and snowstorms, he managed to put on 100 consecutive performances — donating 100 percent of the money he raised to L’Arche Canada, an organization helping communities that support people with intellectual disabilities.

Through sold-out shows at Toronto’s Great Hall, Canadian radio play, and streaming numbers reaching over a quarter of a million, Hart shows no signs of slowing down.

We caught up with Jordan Hart to find out what it’s like to self-produce an EP, his charity efforts, and his musical identity.

How long ago did you find your passion for creating music? Were you playing and writing from an early age?

I come from the most musical family that I know of☺️. Some of my earliest memories are of my mom and all of her siblings singing in five-part harmony around a campfire, going to see my uncle’s country band (Emerson Drive) play in bars when I was far too young to be there, and pretending to play for crowds of thousands before I could even speak properly. That said, I didn’t see music as a career path until high school, which is when I really started to write music and perform it for live audiences.

Writing music has almost always been a form of therapy for me. Especially in the last few years, when I sit down to write, I try to put myself in a state of creative flow. The things that come up musically and lyrically are often driven by deep emotional currents that I have been going through, sometimes even without knowing it. I’ve started to realize that my goal with my music and live shows is to create a peaceful, uplifting, and healing environment that helps encourage people to be more vulnerable with themselves and each other. My favorite thing about music is its ability to connect people and I think it’s in those states of comfortable vulnerability when we connect with each other in the most meaningful ways.

Playing a 100-day Busking Challenge is an incredible accomplishment, but to persevere in harsh Canadian weather while raising money for charity is even more so. Where did the idea for the challenge come from?

Thank you! The 100 Day Busking Challenge came together on a whim. I was talking one day with some friends who I met while busking about the positive energy that busking on the street cultivates and we wanted to see what would happen if we spun that energy over 100 days in a row. There were many highs and lows, but it was an incredible experience to say the least.

Every Sunday, I donated the money that I made busking to L’Arche, which is an international organization that provides loving communities for people with intellectual disabilities. My family has been a part of the organization since I was very young, and the cause is something that is very close to my heart. I’ve noticed that people are commonly quite uncomfortable around those with intellectual disabilities and that there are many misconceptions about some of them. In this beautiful time when there are so many important conversations happening around social equality and supporting individuality, I wanted to lend my voice to help spark a conversation around this group that would likely not have the means to start it for themselves. The biggest thing that I am hoping to help spread is the deep love that surrounds this community. In my experience, the core members of L’Arche have more to offer me than I could return, especially in the way of teaching me to love and be loved. Sitting around the table in these communities, I have always felt valued for who I am beyond titles, money, and material. If there’s only one thing that I could have people take away from the message that I am trying to help shed light on, it would be to ask that they give people with intellectual disabilities as much of a chance as they would give anyone else to become valuable members of their lives.

When you began to work on your EP, you were encouraged to self-produce. Why was that the right journey for you?

Yes! It was an incredible experience because I got to start with something that was profoundly representative of who I am as an artist. All of the little imperfections and successes add up to a ruthlessly accurate picture of where I am in my musical journey. I feel like people will still be able to pick out my identity within the various styles that will come out as I collaborate with more producers and instrumentalists in the future. This makes me feel a sense of freedom to explore all of the different styles that I am interested in without sacrificing the image of who I really am.

What were the biggest lessons you learned creating your debut EP? Did you have any expectations or even reservations going into the process?

One of the biggest things that I learned during the process of creating this EP is just how subjective music is. When I would bounce some of the early recordings off of friends and mentors, I was frustrated and confused by the varying responses. Everyone passionately represented their own opinions and almost all of them contradicted each other at some point. As time went on, I then found that they all changed their own opinions to something else, which taught me that there is no such thing as a song or musical idea being better than another one. There are only successful and unsuccessful connections, and those depend just as much on the listener’s current state of mind as they do on the music itself. After realizing this, I was able to put a lot less pressure on myself and focus more on what mattered to me in the moment.

When fans listen to the EP for the first time, what kind of experiences and emotions are they going to hear about? What can you tell us about the overall feel of the record?

The EP as a whole explores concepts of connecting with others and self. I drew from my experiences in all of my relationships, healthy and otherwise, and was inspired by the search for peace and a deeper connection in those relationships.

I hope that this music takes people to a peaceful, healing place and that it helps them feel more comfortable to be vulnerable with themselves and the people they love. I hope to see these songs become theirs as much as they are mine.

What are you most proud of when you think back to the entire process of writing and producing the EP?

I think that I’m most proud that I saw it through to the finish line. I love writing and creating music, but it always gets difficult near the end. I don’t think I ever really know when to stop and am guilty of working something to death until it isn’t special anymore. But with this project, I was able to step back and let it go when it felt right, which pretty exciting for me.

Are you taking time to just enjoy the record being out and enjoyed by fans, or are you already thinking about the next project?

A bit of both! Every day I am blown away by how intentionally people are listening to the music and how deeply it’s been resonating with some of them. I don’t think it will ever stop meaning something to me, especially with this EP because of how vulnerable it is. That said, the pandemic has given me a lot of time and space in the studio, and I am really excited to say that I have another EP on the way that is almost completely finished! I’m hoping to release it soon after the first.