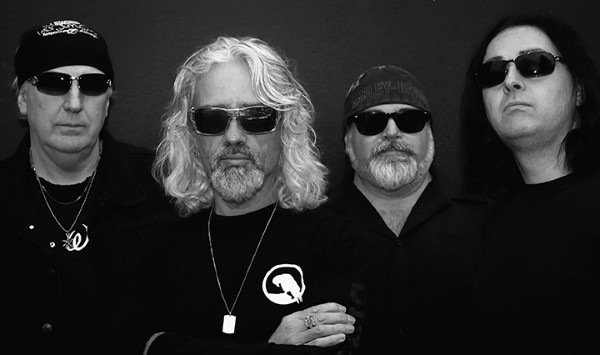 Chart-topping Canadian rockers BigMotorGasoline are pushing the pedal to the metal when it comes to this, their latest album The Way Things Used To Be, and now they’ve released a new video for their single, “Whiskey Down”.

Their sophomore offering, The Way Things Used To Be is working man’s, A+ grade, southern rock with a bluesy swagger at its finest. And the video for “Whiskey Down”? Reminiscent of life pre-COVID.

“Making this album was a great experience from start to finish,” lead vocalist and rhythm guitarist John Freitas says of the 10-track release, “and ‘Whiskey Down’ is my favourite song from it.

“It paints a picture for me,” he continues. “It’s a snapshot of where I love to be, kicking back in the country. And from a song that was written more than three years ago at a friend’s house, to the video that we’ve just now released, in the middle of a pandemic and our industry’s total disruption, no less?

The track was initially penned before the current rhythm section was in place, and “was quite different,” Freitas adds. “But once the BigMotorGasoline lineup was solidified in 2018, the song was ripped apart and rebuilt with all of us contributing to make it a true four-man effort.”

Making the video was just as much of a wrestle as they swerved left on previous plans.

“When the pandemic hit, all our live shows needed to be cancelled,” lead guitarist Roger Dafoe says. “Making videos was the answer when we asked ourselves what we were going to do, but even that decision wasn’t as easy as it seemed.”

Restrictions around gatherings and the camera crew’s mismatched availability delayed the shoot through to mid-September.

“It was one of the last warm, sunny days before the arrival of winter,” Freitas recalls. “Roger led the way on his four-wheeler down a very narrow trail, deeper and deeper into the woods just west of where he’s based in Tweed, Ontario.

“I slowly drove my van, which was fully loaded with gear, thinking: ‘can I make it there?’

“We arrived at the sight of an old, broken-down shack that was used for producing maple syrup,” bass guitarist and backing vocalist Dave Brown explains. “For our purposes, though, it was going to be a moonshine shack. There was a cliff on one side of us, and very tall trees all around; it made us realize the effort to get there was the right choice.”

It was a skeleton crew of just two camera persons and, as it turned out, those very tall trees would force BigMotorGasoline’s hand at reimagining the pre-planned scope.

“We realized the idea of drone footage from above needed to be scrapped due to the many trees in the way,” drums and percussionist Sterling Dale shares. “There were cameras on the ground, in the trees, on roofs, and on amps; it was ‘as many shots and as many angles as we could capture that day was going to have to do.’”

The original storyboard was to feature a backwoods party to set the scene of the song but, not wanting to risk fines for more than 10 people gathered, the band pivoted once again.

“Change on the fly,” Freitas considers. “It’s been a whole year of that, for everyone, and we’ve done what we can to keep getting music in the hands of fans who need an escape from the stress, and just want to rock out and have a good time.”

Check out the video for “Whiskey Down” below, and find out more about BigMotorGasoline via our mini-interview.

BigMotorGasoline has shared the stage with Sebastian Bach (Skid Row) and the all-star collective Bonds of Mara in Peterborough and played in venues and festivals from Marmora, Belleville, Kingston, Warkworth, and Ottawa. This unexpected pandemic has slowed down the exposure process for their sophomore album, The Way Things Used To Be.  Previously with the debut effort, Fuel to Burn, BigMotorGasoline showcased their music around the globe prompting positive reviews and enjoyed a write-up in UK’s Rock & Metal Magazine with notable rockers like Monster Truck, Deep Purple, Michael Schenker, and Night Ranger.  One song, BYOT secured the number two position at a year-end chart in Montreal in 2017.

Always great when it comes to live shows, BMG really knows how to interact with their crowd. You can literally feel the energy going back and forth between the crowd and the band, it’s like they are feeding off of each other! BMG is there to entertain and that is exactly what they do! When BMG is live on stage, the crowd is always 100% responsive and totally engaged with the band.

Tell us about the recording process behind “The Way Things Used To Be”?

Dave: The recording process began in February of 2019. The gear was loaded into Northumberland Music Studio/Studio 29 just east of Warkworth, Ontario on a cold Friday night to be ready for a solid weekend of bed tracks. Little did anyone expect that that was the first weekend in a process that would end up taking a year before the final product was in our hands! Several rewrites, remixes, endless searches for guitar tones, studio availability, injuries, personal matters all the while trying to maintain a full as possible calendar of live events. All in all, care was taken to not let anything past our ears that was not up to our standards before it was done. It would not be finished until every band member was satisfied with the results. As a video for the song The Way Things Used To Be was shot in February of 2020 and set for release well before the official album release date of May 27, 2020, and an already healthy calendar of events planned for the year, things looked all in line for a positive year…then came covid!

John: Getting the album out to the listeners! 2020 was obviously a challenging year for everyone, everywhere, so we sulked for a bit as everything seemed to fall apart, but we picked ourselves up, dusted off the dirt, and knew we had to change our plans. The band took on the world via social media and emails.

Researching every possible avenue to be heard, BMG has been successful in gaining airplay during 2020 worldwide from Canada, USA, United Kingdom, Germany, Spain, Mexico, South Africa, Australia, and Malaysia.  While not actively embraced by local mainstream radio, the band calculates they have been featured on almost 175 radio shows, networks, and podcasts that can be heard on the internet.  Reviews from radio have included Code Zero Radio (Iowa/USA) describing the band as “honest rock desperately needed on the radio”, From The Depths Entertainment (North Carolina) – “absolute gold for driving”, and Q108 Kingston adds “adds an almost southern rock flavor, the energy and licks take me back to the 80’s and 90’s music…”

With the help of fans and music lovers, newer videos created in covid safe environments for Iron Horse and the latest single Whiskey Down accompanied releases to radio with all videos breaking 40K in views, and the video for Whiskey Down (shot in 2020) has now surpassed 52K in views since it’s release in January of 2021.

The absence of any live shows gave the band the unexpected chance to write, write and write some more! So much so that a new album may be recorded before we ever do a live show to promote The Way Things Used To Be release. Not in the plans but it’s the hand we were dealt…so we made the best of it…in any way possible. In retrospect, 2020 was a year about learning new skills and growing in many ways.

Dave: Play live shows and get the live music to our dedicated fans. We love ‘ya! With much uncertainty still in the air of when and how strong live shows will return, we are not setting expectations too high but we will still strive to do the most we can do. We feel positive with the support we get on social media and the early requests for music, write-ups and interviews are certainly encouraging to all in the band.

A recently shot 30 minute live set by the band at the historic Empire Theatre in Belleville, Ontario is set to be released sometime late April/early May as part of the Music City Monday series produced by the theatre itself promises to be a “must watch” for all.

To be on mainstream radio would still be a goal of the band’s in 2021. Getting the word of the band out to new listeners is the plan right now either by more promotion of The Way Things Used To Be or by new music. Either way, we will keep our nose to the grindstone and see what happens!

Dave: That is such a difficult question to answer. You never know what opportunities may arise from one day to another, so you keep your options open. We will collaborate with anyone of any genre of music as long as it is real, honest and to the heart! If it rocks…it talks! Too many to mention but dream collaborations may be with writers/producers like Gordie Johnson of Big Sugar or Kim Mitchell or Rob Baker of Tragically Hip . In the future, our wish list for playing shows with other acts may include, Canadian acts like Monster Truck, Big Wreck, or The Lazys (via Australia but stationed in Canada now). As for international acts…once again too many to mention but say Ritchie Kotzen, Kid Rock, Blackberry Smoke or maybe Lynyrd Skynyrd.