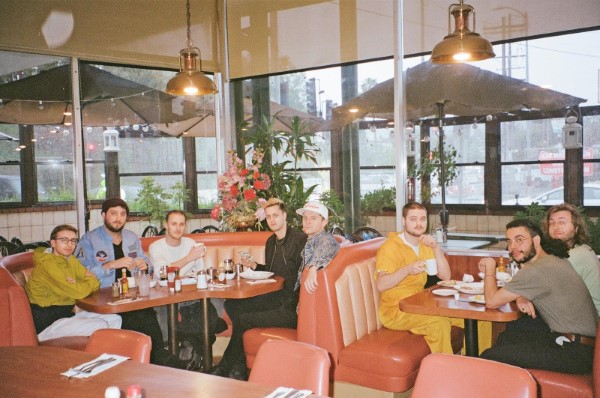 Busty and the Bass, the Canadian 8-piece soul-jazz collective have recently released their new EP, ET Suite via Arts & Crafts. ET Suite reworks the track “ET” from their album Eddie which was released in August 2020, with the band transforming it into four new, distinct, and sonically diverse iterations. The EP features the legendary founding member and bassist Verdine White of Earth, Wind & Fire as well as Afro-soul singer Pierre Kwenders, and a trio of artists from the band’s Montreal community: Terrell Morris, Kallitechnis, and Tika the Creator.

ET Suite rethinks jazz improvisations in the era of Covid, pushing the limits of collaboration. Recorded safely and entirely while in isolation, each instrument was tracked independently during the fall of 2020. The 15-minute five-song EP, flows from the original psychedelic funk cut into a silky, smoothed-out R&B rendition into an instrumental groove with a bassline courtesy of White into the candle-lit afro-soul crooning of Kwenders, all finally culminating in a wild free-jazz freakout. ET Suite showcases the group’s uncanny ability to seamlessly flow between genres, combining funk, jazz, and hip-hop into a sound that is as energetic as it is centering.

“Contrary to how we’ve recorded in the past, every single element of this song was recorded in isolation, including each instrument from the band” says Chris Vincent (trombone). “There were lots of discussions and listening sessions but as far as the recording process, each instrument was recorded completely independently. There’s an element of this that actually plays into the themes of the music. The ET Suite is really a space traveling journey from one isolated planet / atmosphere to the next and that transportation to isolated spaces is exactly how the creative process worked.”

“The idea to create a suite for ET came to us on a sunny day in June in Parc Laurie” says Louis Stein (guitar). “We wanted to flip the idea of a remix on its head and instead of just handing off stems to various producers to see what they’d come back with, we took the challenge into our own hands. We agreed to make a suite instead of a remix, extend the song into a 15 minute journey — taking the listeners through a completely new interpretation of the track where everything from the instrumentation to the verses were reimagined, while always falling back to the song’s original hook, a reminder of the suite’s origin. Within hours of that conversation Chris had a working skeleton going of what the suite could look like and the pieces starting to come together around it. We reached out to several artists we’d been wanting to work with for a while and despite the enthusiastic responses, getting in the studio together was not easy. Flashback to the day the pandemic hit: we were in LA with a studio session booked to record Verdine but the studio and our LA show that night were cancelled in the whirlwind of news that arrived that day. Months later, studios were still closed and our producer Neal Pogue, was instead forced to drive up to Verdine’s house and record his bass part from a mobile studio in a van.”

You can check out ET Suite right here.