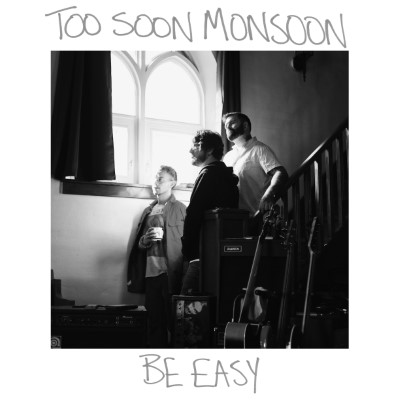 After a two-year hiatus, Too Soon Monsoon is returning to the music scene with their new song “Be Easy”. The single is the first one off their live-off-the-floor sophomore album and the first one with a new band member, bassist Steve Adams, who was previously in the group One Bad Son.

The track was recorded over three consecutive days in an old converted church outside Saskatoon called The Sound Castle and tackles the need to have compassion for yourself and for others. Introduced with a sparse vocal-piano arrangement, the song builds slowly into a massive orchestral ending featuring passionate vocals, expressive piano and organ, steady bass, and thunderous drums.

The band first started releasing music in 2017 in the form of two EPs, and then released their debut album Waves: We Provide What We Absorb, We Absorb What We Provide in 2019. In March 2020, they released another EP, Stop The Cycle Of Conflict ahead of their expected JUNOfest tour, which was canceled due to the pandemic. Nevertheless, their DIY music video for one of the singles “Cycle of Conflict” premiered on Exclaim!. Since then, TSM has charted nationally on the Earshot radio charts and was recently nominated for two 2020 Saskatchewan Music Awards: Rock/Pop Artist of the Year and Indigenous Artist of the Year. They’ve also performed at Breakout West, SaskJazz Festival, Ness Creek, Winterruption, and Big Winter Classic and have shared the stage with PVRIS, Mo Kenney, Busty & the Bass, Blessed, Weaves, and Wide Mouth Mason.

What does it mean to you to be releasing music after a two-year break?

We are really excited to be releasing new music again! When we were playing shows over the last few years, we put a lot of time and energy into rehearsing and performing songs from our 2019 album Waves and 2017 EPs so we weren’t really finding time to work on any new material. We did put out a two-song EP in March 2020, but it was just alternate versions of the two closing songs from the Waves album, so this three-day live-off-the-floor recording session was a great way for us to have dedicated time to work on new music. It feels great to be sharing something brand new again. The new recordings capture the energy we bring to our shows and “Be Easy” seems like a song that will resonate with people now that we are coming out of an especially challenging winter.

What’s the story behind this song?

The idea for “Be Easy” first developed in the spring of 2020, a few weeks into the pandemic. It’s a song about empathy – about having compassion for yourself and for others. Sometimes you just want to simply tell someone to be easy on you… that you are trying your best. And sometimes you need to say that out to yourself as a reminder to stop judging yourself so harshly. The first verse speaks to the importance of taking accountability for our own actions, but also reminds us that sometimes we might slip up and that we’re all growing and learning: “I know I make it hard for us to talk, I am so loud, I take up space with my thoughts. I grow but then resort to old ways… when I’m stressed or tired I lose my will to change”.

The idea of connecting new songs to older songs is a fun way of writing and “Be Easy” feels like a sibling to “Growing Up” and “Change” from our last album. That album focused on self-improvement, going inward, and becoming more aware of the energy we’re providing because that is what will be returned our way. But “Be Easy” addresses how having compassion and acting from a place of love is easier said than done. Sometimes when we’re stressed, or tired, or when a global pandemic hits – it might not be as easy to maintain our growth, our self-care, or our good habits, and we need to remind ourselves that it’s okay to falter. Being compassionate allows us to move more easily through tough times. As soon as we were able to jam again, “Be Easy” came together quite effortlessly and we all really connected with the feeling and the lyrics. Understanding each other more and reminding ourselves to be easier on one another has allowed us to work better as a band.

It was such a great experience, one of the best weekends we’ve had as a band and the highlight of the past year for us! We received support from SK Arts Board to experiment with recording live-off-the-floor in The Sound Castle. The old converted church has beautiful wood floors, a high roof, stained glass windows… the acoustics are amazing and we instantly felt inspired as soon as we walked through the doors. We didn’t want to get too pretty with these songs, we wanted them to sound raw.. so we decided to give ourselves just three days to demo and work on as much new music possible in a live recording style. “Be Easy” was one of the first songs we tracked that weekend.

To keep the music sounding fresh, we would play only a few full-band takes of each song or idea, and as soon as it felt like we got a solid take, we’d listen back to the track, make a few notes for future mixing and then move on. It was a lot of fun and we immediately fell in love with this method. Greg did track some additional Hammond B3 Organ back in Saskatoon to thicken up a few parts, but otherwise, the music is basically what was played live together in the Castle.

Focusing on writing and recording for three straight days in a small town away from the distractions of the city was a special experience. Since we had no idea what things would look like going into the winter regarding gathering restrictions, we made sure to get a good amount of music recorded. It was nice not having to record each instrument or vocal separately. Trying to record drums separately from the piano and vocals in the past seemed to limit the energy we could bring to a recording. We wanted to find a way to stay true to the chemistry we have when we play together since we all feed off one another’s energy. We wanted imperfections to come through, we wanted the music to sound alive. In between recording the new music, we would take time to visit, eat, enjoy the outdoors, and rest. We felt relaxed the whole time and it ended up being an easy way for us to record. We are very eager to return to The Sound Castle.

What is your hope for the song?

For the song to move people and make them connect to their emotions… to make people think about how it’s important to be kind and speak in a caring way to yourself and to others. And to also recognize that people may be going through personal things that could make them act out in hurtful ways toward you.. and vice versa. We hope the song makes people feel good, feel seen, feel heard, feel understood. And we hope it gets people excited to listen to the rest of the album!

What can fans expect from your next album?

“Be Easy” is an emotional ballad but the album includes a lot of upbeat tracks. It also gets pretty heavy and thrashy at times. Steve adds a lot of depth and funk to our sound and his bass works so well with our playing styles. We kept a few references in mind when we went into The Sound Castle: early White Stripes, Beatles Sgt Pepper, and Prince’s Purple Rain. The album will make you feel like you’re sitting in The Sound Castle experiencing the music being recorded. It sounds alive, it sounds free – it sounds like we are having a lot of fun because we did have a lot of fun. Christian Douglas engineered and Josh Palmer co-produced and later mixed/mastered the material from the session. Josh and Christan made us feel comfortable and confident during the weekend – we’re thankful for their work on this new music. We are very proud of the songs we recorded over those three days and we’re excited to have people experience the full album. There are hints of classic TSM vibes, but it also shows that we are taking a step in a new direction.