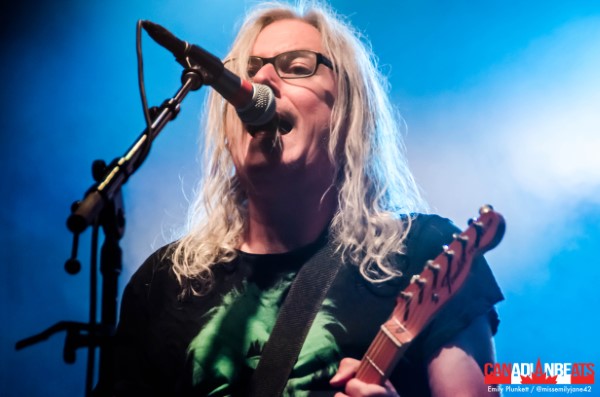 For musicians far and wide, the COVID-19 global pandemic has been a challenge of unprecedented proportions.  Costly tour cancellations combined with the closure of many of Canada’s best music venues lead to many permanent losses, the impact of which will be felt for quite some time to come.

In order to weather the quarantine storm, artists are working hard to fill the voids left by an industry ground to a halt; with some fully embracing social media to find ways to reach fans.  Patrick Pentland, the mastermind behind some of Sloan’s greatest and most beloved hits, is one such artist working through the trials and tribulations the various online platforms have to offer; all while experimenting with his new solo project, Fuzzed Out.

“It has been scary, but rewarding,” says Pentland, reflecting on his first two performances with Side Door. “Financially it’s been a help, but it’s more about accomplishing something that, a few years ago, I wouldn’t have been able to do.”

Following shows by bandmate Chris Murphy, Pentland’s first show in December saw him test the online platform with stripped-down acoustic versions of some of his loudest Sloan hits, such as “The Day Will Be Mine” and “Everything You’ve Done Wrong.” His January show was an all-request show featuring fan favourites like “Ill-Placed Trust.”  Both shows featured questions and answers from fans around the world relayed to him by Sloan lighting operator and live stream MC, Kevin Hilliard.

Although his online shows have been successful, Pentland does recount a number of technical difficulties that he has encountered, particularly with his third performance in February.  His theme of celebrating the songs of his bandmates, Murphy, Jay Ferguson and Andrew Scott, was well received by fans, but technical difficulties plagued the show despite a flawless sound check.

“Something was suddenly distorted, and not in a good way,” he says. “We didn’t know if it was the mic, the headphones, or something everyone watching could hear or not.”  After several songs, and a growing muscle spasm in his right shoulder, he opted to spend extra time chatting with fans.

This third show also came in time for the release of “Sitting With My Back Against the Wall” and “My Own Worst Enemy,” the first two songs from Pentland’s solo project, Fuzzed Out.  Inspired by his love for 80’s shoegaze cornerstones, the Jesus and Mary Chain and My Bloody Valentine, Fuzzed Out formed in 2017 as an outlet for the harder and louder sounds he first experimented with during the early days of Sloan. With the help and encouragement of his mentor, J.J. Collins of Sonic Unyon, and drummer Dean Bentley, there were intentions of playing shows; but was sidelined as Sloan went out on tour for the 2019 re-issue of Navy Blues.

“It’s just feeding my volume freak side,” says Pentland.  “It really reflects my aesthetic from around the first record, Smeared: lots of noise, echoes, and distortion. It might not stay that way, but for now that’s a sound or feel I don’t get to do much with in Sloan these days.”

In addition, Pentland has also created a profile on Patreon, an online platform that allows fans to support their favourite online creators through a subscription-like service.  From the experience using platforms like Patreon, Side Door and the artist-focused music store, Bandcamp, to promote his work, he is careful to ensure both he and his fans are getting good value from the services.

“It’s a slow build,” he says.  “It’s cool though, because I want to create the right blend of social media access, without the algorithms and ads. I got sick of posting for people/fans, and they don’t see it because of the platforms and how they limit or monetize posts. I have no problem with businesses making money, but as a promotional or even fun tool as an artist, that doesn’t help me. And social media can greatly undervalue everything creative, so dictating what I share that I value how I want to is a good thing. And it’s the cost of 2 1/2 cups of coffee a month.”

It’s fair to say that, despite it all, Patrick Pentland has found a groove in this year without music that has kept him busy and engaged with eager Sloan fans who want nothing more than to support their favourite band in whatever way they can. In addition to planning another Side Door online show (possible show theme being “No Friggin’ Around: Just the Hits!”), Pentland hopes to sort out additional ways to stream rehearsals, answering fan questions and possibly give tutorials to a wider audience.  He doesn’t know exactly if a full Fuzzed Out album is on the horizon, but additional releases are on the way.  And although he cannot convince them to do a full-band online show, he does hint that the next Sloan record is in the works.

“My songs are already written this time, ironically, and will be rockers. Unironically.”