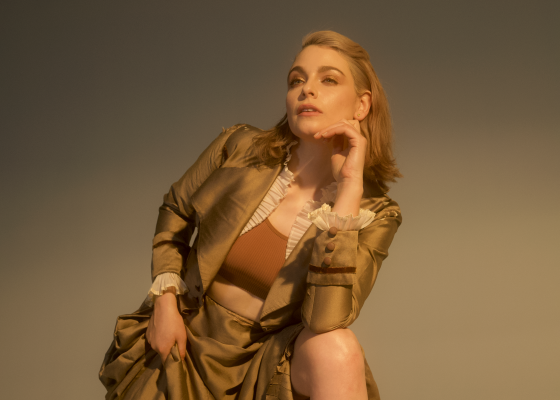 Montreal, QC-based artist Laroie has unveiled her new single, “Can’t Let Go”, a song produced by Gene Tellem and on which she incorporates 90’s pop dance and garage/house into a very bright sound.

The video, which was filmed in a long sequence shot by the director Maïlis Roy-Lessard, shows Laroie performing a choreography in a large empty room. She explores the space available to her and manages to free herself through her movements which become cathartic and liberating from the weight that inhabits her. “Can’t Let Go” is a song about resentment and the vicious cycle that builds around this emotion, but above all, it’s about how to break free from it.

Laroie shares on the release,

“I feel like with this new release, people will see my true self. The songwriting comes from a very special place in my heart and it also showcases inspirations that are really rooted in me. I’m so happy to share a song that resonates with every ounce of my soul and so I want people to connect to it.”

Check out the video below, and find out more about Laroie via our Five Questions With segment.

Hello! My name is Gab and I make music under the moniker Laroie. I’ve been in the music industry for about 10 years now, but I’ve just started my solo project last year and I’m loving this new adventure 😉

I like to incorporate several styles when creating. It includes dance, garage, and 90s house, but also pop and R&B, all of which have always greatly influenced me. I like to keep an open mind on how to create new music. Sometimes it will start on its own, just me at home with my piano and sometimes it will come from a producer I’m working with. One thing for sure is I like to stick with the people I’ve created a musical connection with and nourish that connection.

I don’t have a show coming up for now, but I just did one presented by Ausgang Plaza and I had the best time! I love playing with a band, which was the case for my last show. It really adds to my original songs. I was accompanied by Pascal Deaudelin on the drums and Maxime Castellon on the bass and I find it’s the perfect addition to my live set. I love to dance around and get into the tracks when performing. I think people always feel like I’m really having fun and that I’m in the present moment when they see me perform. I love that!

Well not to sound obvious, but I would go with “Can’t Let Go”. The songwriting comes from a very special place in my heart and it also showcases inspirations that are really rooted in me. I’m so happy to share a song that resonates with every ounce of my soul and so I want people to connect to it. It definitely represents the artistic direction I’ve evolved in and so I know if people like this song, they’ll love what’s coming… 🙂

I love so many different Canadian artists, all styles combined! To name a few, I’ve been listening to Gene Tellem, SHAH FRANK, Gab Rei, Rober Robert, Kallitechnis, RYAN Playground, KAYTRANADA, and more! So much more!