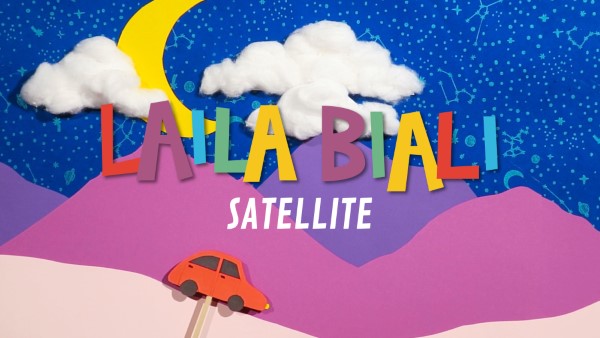 The video was created by Stephanie Haller and Nick Collingwood from Brooklyn-based creative agency, Halla Creative – who have worked with Laila since 2015. Stephanie and Nick created the entire video inside their Brooklyn apartment, where they hand-cut every object and filmed the video using a combination of live-action and stop motion animation. This video is meant to serve as a reminder of all we’ve been through “together at home” for a year now as we simultaneously look forward to a brighter future and the time when we’ll all be together again.

“When I first heard Satellite a few years back I had the idea to tell the story with paper cutouts. The vision just came to me as I heard the song. We decided not to pursue a video for this song at the time but the idea always stuck with me. When Laila approached me again about the video a few months ago, we both felt like it was the perfect quarantine project.”

“When I first wrote Satellite, I was a relatively new Mom, still touring and often away from my immediate family,” says Laila. “The lyrics came to mind after a summer show I’d played in Niagara on the Lake. I was aching to be back home in Brooklyn with my husband and son, and as I drove my rental car back to where I was staying for the night, I tried to imagine my boys in the car with me, singing along to the radio together. Just the act of imagining them did bring them closer somehow. And when the world went into lockdown a year ago, the message behind this song took on new meaning. It became a reminder of how powerful it is that we can connect to loved ones via satellite when we can’t physically be together, and of how meaningful it is to keep one another close in mind and at heart as we reflect on old times and look ahead to a future where we will be together once more.”

Check out the video below, and stay up to date with Laila via her socials.